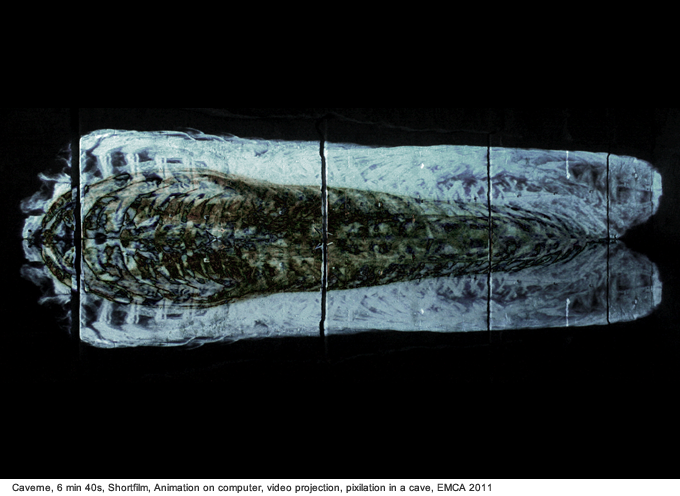 The digital universes drawn by the hand of Boris Labbè (1987) are placed in the meeting point among Steve’s Reich compositions, Bosch’s paintings and the evolutionist theory. These three things are apparently very distant, but it’s himself who gives this suggestion. The young French artist, with solid bases in free-hand sketching and in plastic arts, carries his complex imaginary in extraordinary animation films that have attracted the attention of different kind of festivals in the last years.

The video installation Danse Macabre was shown with success in 2013 for the sixth edition of roBOt Festival in Bologna, where it won the first prize of the “call4roBOt” section, after it had won the Best Video Installation Award at Multivision Festival of St. Petersburg in Russia, too.

In Boris Labbè‘s research the datum of the stratification, both technique and thematic, it is strong. In fact, on one side organisms, characters and elements animating the artist’s worlds are defined in details as if they were drawn one to one (and partly they are), but on the other side the complexity of the narration picks up heavily from concepts and disciplines far apart, from the microbiology to the mythology up to the philosophy.

The pretext for this interview is the recent presentation of Rhizome, Labbè’s last work selected for the new edition of roBot Festival, taking place in Palazzo Re Enzo, Bologna, from 7th to 10th of October. With Rhizome the artist seems to have reached the full linguistic maturity, every detail is perfectly chiseled and it contributes to build the sense of the whole work. The graphite and the software are reciprocally contaminated, so it’s hard to recognize where the first one leaves the place to the other one. Metamorphoses and laboriousness of transfigurations touch the highest levels of qualitative yield, but it’s not at all. For the artist the path is still long and unexplored roads are too much tempting to stop now. 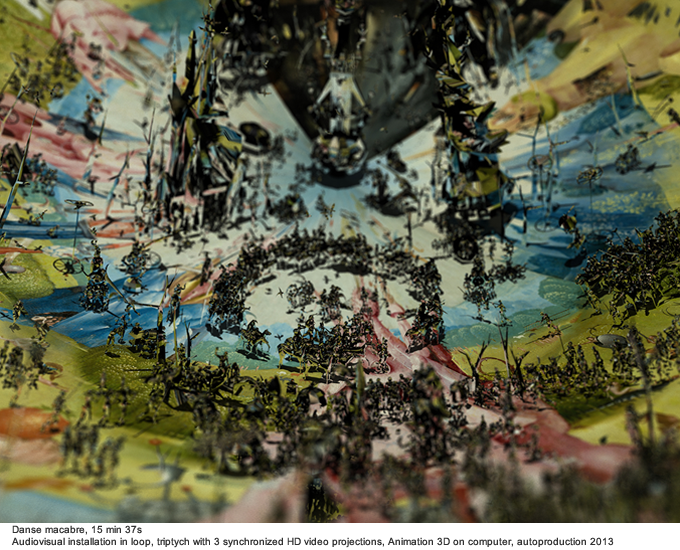 Claudio Musso: In this age dominated by Gif as very short animation based on visual calembour or on manipulation of existing images, your work seems to go countercurrent, embracing an opposite concept of animation. How did you start to do it? Why did you choose this kind of research?

Boris Labbè: I’ve drawn since I was a child and, actually, I have never stopped drawing. In the beginning of my studies in Fine Arts and after a big number of trials with different technics (drawing, painting, photography, serigraphy, ceramic, video etc.) and topics, I came back to drawing for an approaching to contemporary art. Those days I started to get interested in animated films and digital art, because I considered these fields as a new and logical direction to the evolution of my art work.

Once I started EMCA, the animation school I went to, I discovered a whole digital mechanism. I sought step by step for my own language. As a consequence of this research, I got interested in the history of film animation and furthermore, I discovered experimental films.

Thus, this is the lane that brought me to my current line of work. When I work al an animation project I depart from zero, everything has to be done, to start an animation project is for me, like starting a drawing project, in the beginning, you don’t have anything but a white page.

Recently, I have learnt that Alexandre Alexeïeff, a great animation filmmaker and well known for his famous discover, the pin screen, thought that his films were closer to automat theatre than to cinema. In my opinion, this idea is also suitable for my work, the only difference is that I use last generation digital software and that nowadays we are living a period of hybridization of artistic disciplines. 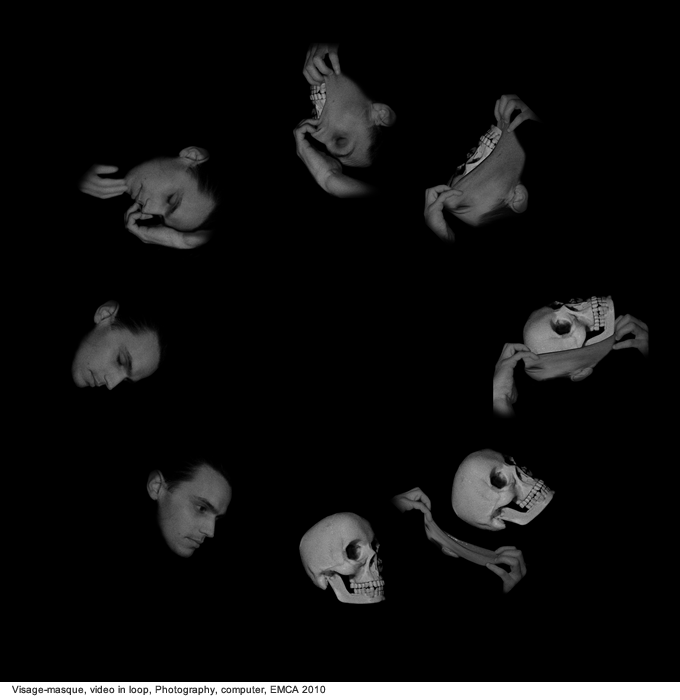 Claudio Musso: In many of your productions, particularly Danse Macabre, the pictorial impress is sensitive. It is easier to perceive in your job the influence of the Flemish painting (Bosch among others) more than the presence of an aesthetic theory of digital. Which are your sources of inspiration? Which are your models? Who do you consider your Masters?

Boris Labbè: My research, as well as my drawings, has many influences, from painting technique to the theory. For my work in animation I usually start by collecting heterogeneous elements, copying, pasting, connecting the flow of ideas and images in a seek of a more precise sense for my work of art.

I enjoy visiting classical and contemporary museums, as well as watching as much cinema as I can, such as animation, video art, digital art, and I am increasingly interested in life action cinema. Among my classical masters, I can mention Bosch, Bruegel, Patenier, da Vinci, Goya, Rembrandt, Dürer, Doré, Blake. It is true that Flemish painting is an eternal source of inspiration for me. I love their style in representing landscape, the enormous amount of characters and their attempt to represent total images which would include everything within itself. 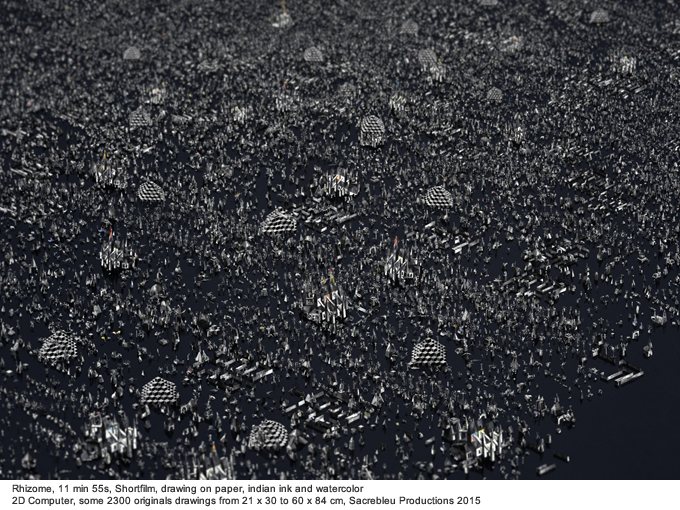 Claudio Musso: In your web site there is a section called “graffiti”. It sounds very interesting that an author of digital animations would declare an affiliation to the “street.” In your opinion, how has that experience counted for your actual work? And, if it is still in progress, how do you consider it?

Boris Labbè: Actually, my background is not very close to the urban environment, because I grew up into a valley on top of the Pyrenees in southern France. My basic culture is more similar to a quiet life close to nature and the mountains. When I moved to city because of my studies, I met some artists involved in graffiti scene. Through animation I saw Blu’s work at first and it really impressed me, and so I start to be interested in urban art and in technological possibilities of intervention in outer space.

At that time I was still a student and I was planning a screening videos above on a stone wall in a cave near Angoulême. Then, that project was materialized in my film Caverne (2011). At the same time I started to paint with sprays in the cave, because I wanted to try a rougher, faster and more primitive work. That was really a period of freedom and pleasure although I had no specific ambition for this technic. I haven’t done more than ten graffiti pieces in my whole life, so I can regard it as a short break, but, who knows, maybe in the future I will go back to that kind of work in a different way.

Talking about animation and digital art, I am still very interested in every art project which is related to urban space, such as video projections, installations or digital performances. In this regard I have outlined several projects that need to be more explored before being submitted. However, my purpose is not only to work with the urban space, but I’d like to push myself into the natural environment: caves, mountains, rivers, forests… 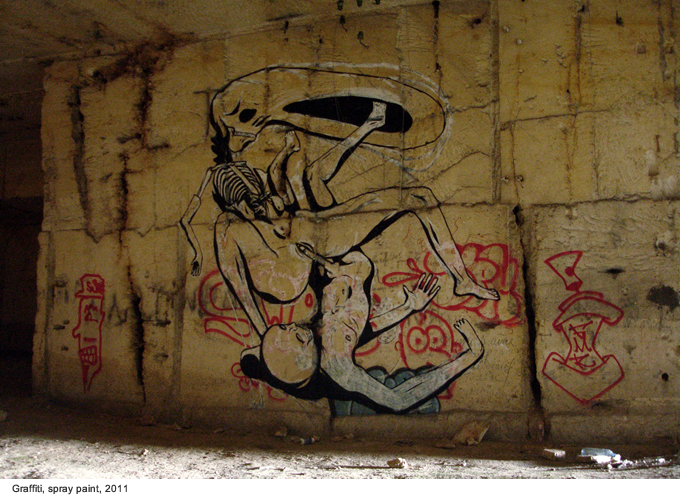 Claudio Musso: Your latest work, Rhizome, as well as having a challenging title, is based almost exclusively on black and white and it seems to hide political or social criticism. How could you describe the evolution of your production?

Boris Labbè: I discovered Deleuze’s concept of “rhizome” quite late. I was absolutely involved in the research for a new project and my intention was to create something being between Steve Reich’s music concept, Mc Escher’s mathematic work, Bosch and Bruegel’s paintings and the scientific theories about life evolution, such as genetics, the relationship between micro and macro etc. Deleuze’s ideas flashed me, because they were exactly what I wanted to talk about. Of course, the idea is developed by him nd Félix Guattari in a complex way in the book Mille Plateaux, but all the rhizome principles are in my film, considering both the biological significance of the term and the philosophical. The rhizome concept can accurately represent the development of all my work from the beginning: all my projects are connected to each other, like a spider web, they are subjected to a continuous metamorphosis, constantly seeking a way to connect, compress and expand.

My first animation work was very formal and minimal, but it already included my favourite topics, even if in hesitant way. My artistic research comes from a perpetual survey, my topics are more complex and better structured although there is always a place for mistake and for the unknown. Taking some risks is important to do something new, I try to follow this rule each time. My topics, the search of origins, the birth, the evolution, the death, concepts of repetition, connection, revolution, distortion, destruction, war, collapse, rising, human condition, history of art etc. 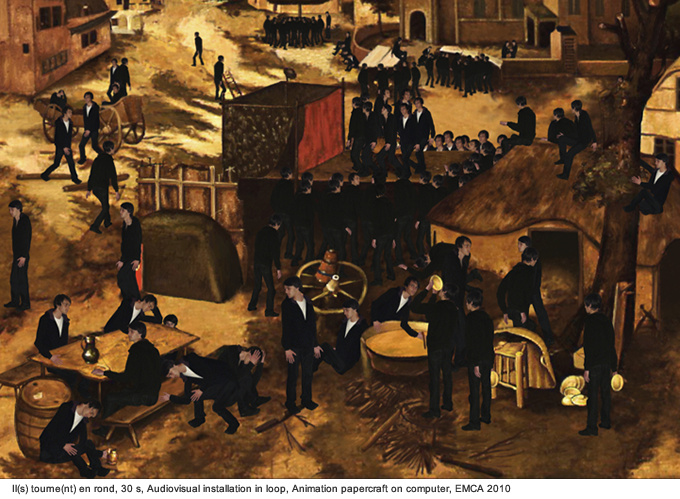 Nowaday drawing still has an absolute importance for me, even if it remains hidden. Currently I’m coming back to traditional animation techniques (hand-made), but including digital tools dedicated to new plastic possibilities. I have also a growing interest in literature, above all for mythology, and this source is likely to transform my artworks in the years ahead.