HUMAN ONE by Beeple M+, Asia’s first global museum of contemporary visual culture in the West Kowloon Cultural District in Hong Kong, is pleased to present the Asia premiere of groundbreaking generative digital sculpture HUMAN ONE by Beeple, a leading figure in digital art and design, in the museum’s Focus Gallery from December 9, 2022 to April 30, 2023.

Beeple: HUMAN ONE presents a dynamically changing hybrid digital-and-physical artwork, which shows the first human born inside the metaverse, a 3D-virtual world accessible only through the internet. The work depicts a human figure the artist calls “traveller” who appears within a seven-foot-tall spinning box-like structure composed of four monolithic LED screens. The traveller wears an astronaut suit and treks forward in an endlessly evolving virtual landscape. The M+ presentation will be the first exhibition of this work in Asia.

Designed as a continuous digital display that will periodically evolve over time, HUMAN ONE presents an ongoing conversation in response to current events and reflects the artist’s changing interests over the course of his life. As the traveller marches forward towards an unspecified goal, the surroundings restlessly adapt and transform into a pastiche of different settings, ranging from the dreamlike to dystopian, from hallucinatory to desolate. Beeple will update this virtual landscape from time to time, incorporating elements from the internet and his own practice to respond to the general state of the world. 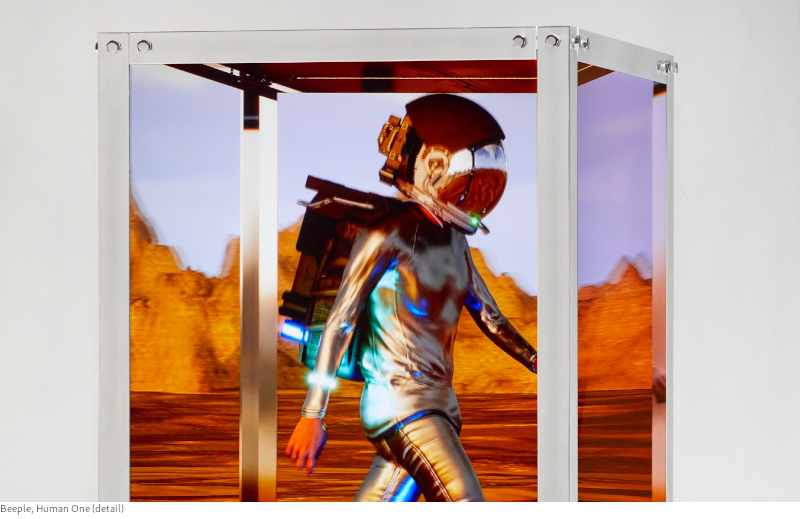 HUMAN ONE presents the viewer with a lens through which they can understand contemporary visual culture as a pliable and ever-growing experience, represented by a figure who is confined within a hermetically sealed case yet aspiring for ceaseless motion, grasping towards a boundless infinity. The traveller’s extraordinary journey is a reminder to viewers of the continued blurring of our own digital and physical existence—a metaphor for human progress.

Suhanya Raffel, Museum Director, M+, says, “M+, as a pioneering museum of visual culture, has been dedicated to deepening our engagement with emerging technologies. We have closely observed the rapid development and rising popularity of the metaverse and digital art among local communities. Therefore, we have worked to incorporate such timely interests into our institutional research and curatorial programmes. M+ is delighted to be the first institution in Asia to present HUMAN ONE, an ambitious work of our time that seamlessly fluctuates between physical and virtual realms. Utilising cutting-edge technology, HUMAN ONE tells an innately humanistic story of exploration, discovery, and new enlightenment. There is truly no better place to present Beeple’s visionary chronicle than M+ which is located at the urban centre of the fast-paced cosmopolitan Hong Kong.”

Doryun Chong, Deputy Director, Curatorial and Chief Curator, M+, underscores the importance of Beeple’s artistic practice, “Beeple is indisputably one of the most prominent and globally recognised figures in the twenty-first century’s technology-driven visual culture. He is part of a generation of artists who have been influenced by a diet of Saturday morning cartoons and Hollywood pop cultural references, as well as the entrepreneurial spirit of networked digital cultures. A destabilizer and trailblazer, Beeple has undoubtedly challenged traditional models of presenting and distributing art. I believe his tremendous vision will strongly connect with Hong Kong and Asia’s many creators and innovators, unveiling to all the infinite potential of today’s virtual universe.”

Beeple shares his excitement to showcase his first physical sculpture at M+, “HUMAN ONE is an ongoing experiment trying to bridge the digital and physical world in an open-ended canvas, a moving work of art that restlessly exhibits timely images and creates new meanings. I am delighted to see the ongoing journey of HUMAN ONE extend beyond geographical boundaries, to arrive at M+ for a diverse and daring audience in Hong Kong.”