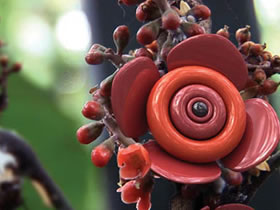 In the creating scene of New York emerge withouth any doubt a Soho studio, where the director Arvind Palep and the producer Serge Patzak direct 1st Avenue Machine, an agency that realizes spots and music videos in computer graphic and 3D animation since 2004.

The first time I see Alias video, Sixes Last, I’m captured by the beauty of a new and lively nature, imprisoned in an orchestrated dance, pulsing harmony and rhythm. I do not even know how, but thanks to the cultural substrate of my own, due to my studies, the theories of the neoclassic German critic J. J. Winkelmann come into my mind.

There’s something magical in this video and I think the artist as a composer that realizes its own work from its contemplation of the “beautiful nature”. To the classical Greek, in the creative moment, the intellect express the idea , so an ideal beauty that isn’t natural, but rather the result of an operation of the artist that unites in a subject the spread elements of beauty existing in different real individualities. The ideal beauty is the expression of a concept, a thought translated in image, a message of harmony, a noble simplicity and quiet size “.

Arvind Palep ‘s idea is the base of the intents of the studio, that is create a new aesthetic that pushes over the barriers of the computer graphic in its interaction with the live action. Thanks to this intent, achieved time after time, our perception of spectators gets more and more dimmed between what is real and what is artificially created.

The immense beauty of the natural creatures present in the botanic garden of New York is a starting point towards a new elaboration in the 1st Avenue Machine . Shot with an HDV camera, the video sees the light in studio mixing 3ds Max and V-Ray. Here, without disturb for far theories, there’s no more nature imitation, rather a real reprise of the nature completed by the presence of artificial creatures.

We’re in front of a technologic reproduction, the how-nature. Every single plant seems an instrument with eyes, a new creature that answer perfectly the tones of the track. The natural rhythm, altered and accelerated, adapts to a new system. The organic fuses with the technologic and the artificial, in a concert to mechanical nature. The images match perfectly with the electro-ambient music of the musician and producer Brendon Whitney , Alias . This music video took part in the program Cinema Electronica of Res fest 2005 and travel around the world thank to the festival itself.

The Adidas spot realized this March is created by the agency 180 Amsterdam and 1st Avenue Machine . Some footballers have an armor generated with computers on their body that brakes when they kick the ball and then composes again. Everything happens in a bright white background with a classical music comment that, both combined, creates an alter dimension, a sort of technologic paradise.

The protagonist is the new model +F50 TUNIT and the world campaign has seen the participation of footballer such as Djbril Cisse (Francia) and Jermain Defoe (Gran Bretagna), Kevin Kuryani ( Germania ) and Arjen Robben (Gran Bretagna) .

During this May the studio realized the Mtv music awardscampaign in Japan ” Transform Japan “. A series of guys has the bodies suddenly composed by machine. Without being surprised, they accept immediately the new reality and continue their movements and dancing to the rhythm of a techno track by Chris Clarke (Warp Records) . Biological alteration, amplifier and plates become one with the men around the Tokyo streets. The spot is a mix of CG and live-action, shooted in “guerrilla style”.

In July has been published Quinn , a fruit soft drink. It’s been shot in three days at El Yunque, the tropical forest of Portoriquo , near San Juan . There’s an exceptional nature, almost paradisiacal, where photorealistic fruits generates a delicious red liquid. Every plant contributes to the work, in an orchestral musical where artificial and organic cohabitate in a renovate relationship. All the intents of the New York studio are found here: the limits between synthetic biology, nanotechnology and artificial intelligence completely.

The last project by has its own name, and it’s a reflection of the concept that everyone has a personal “electronic” assistant, such as iPod or PDA. The concept is expressed by the visualization of a street scene in Manhattan , where some pedestrians have a sort of personal robot. Serge Patzak affirm: “Our aim is to create different “looks” that no one as ever seen before. In particular, we want to use 3D to push the organic and mechanic aesthetic, saw in our work in a new and innovative manner”.

The technologic artists, or aesthetic contemporary researcher, work on this concept and every project and new artistic work it is the result of a collective work. The technology creates artificial paradise that are a solo with nowadays nature, as the botanic garden of NY or the Puertorico paradise are. Life is game, color, reality, fiction, and what happens around us covered by rhythm and new essence. As in the works of the studio of graphic animation most innovative in the planet: 1st Avenue Machine.