The functions of storing, addressing, execution, loop, iteration, “if,” “and/or,“ as well as errors, are not merely new knowledge and tools brought about by modern computer programs, but also concealed “brain circuits” of contemporary life. They administer our every unconscious switch between mobile apps, catalyse our obsession with process management in daily life, magnify our trust of navigation apps, and guide decisions we seemingly make “without hesitation.”

The magnanimity of data mining and the high-performance computing environment have led to unprecedented advances in artificial intelligence, in particular neural networks, which are expanding globally on an industrial scale. The computing system’s tentacles crawl over the earth’s surface, extending into seabeds and valleys. Yet, this unstoppable technology also brings with it an excess of interactions, uncountable loopholes, ambiguity, errors, and abuse.

The denotations of the term “artificial intelligence,” its branches and dominating models, are all evolving with time, yet the technology still finds its way to penetrate into the wider world: today’s world has witnessed the birth of a group of farsighted consumers, and users who are conscious of data and privacy, as well as the subtle transformation of knowledge and the melting distinction between “evidence” and “intuition.”

There may only be a few who have actually read Alan Turing’s famous essay or imagined his machine: however, almost all of us live in Turing’s land, artists included. We are beginning to believe that similar algorithms can be employed in seemingly unrelated fields or disciplines, and that mediums ranging from “image” to “text” can fall into the same computable space.

If we revisit the early twentieth century, we will notice that no revolutionary concepts stayed in one narrow field. Instead, they evolved into more fundamental legacies shared across many academic disciplines—Werner Heisenberg, Claude Shannon, and Ludwig von Bertalanffy may well have proved this. 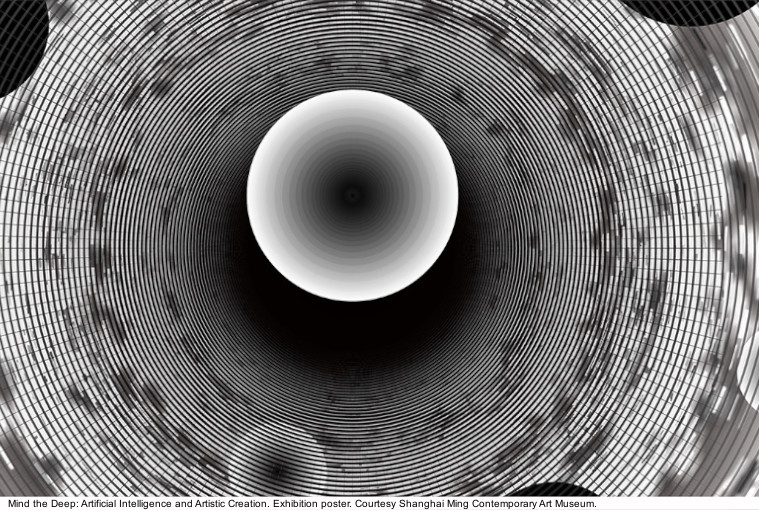 The exhibition Mind the Deep: Artificial Intelligence and Artistic Creation features 28 artworks by 22 artists and artist groups, together with demonstrations from AI conferences, to investigate how artificial intelligence has entered different levels and stages of artistic creation: concept development, logical construction, specific tools, and effects. Furthermore, the exhibition also elaborates how artificial intelligence associates itself in the concealed brain circuits of our lives nowadays, as well as the collective unconsciousness that is immersed in the Technocene.

Mind the Deep reverses the word “DeepMind.” Depths (layers) of the neural networks imply extreme computing complexities and difficulties of comprehension. Yet the world-leading general algorithms developed by the company DeepMind, are perhaps still far away from “consciousness.” If we think of “DeepMind” as our current millieu, Mind the Deep is attitude – the “deep” brain circuits with thousands of twists, desire a “mind,” capable of consciousness, attention, and caution.