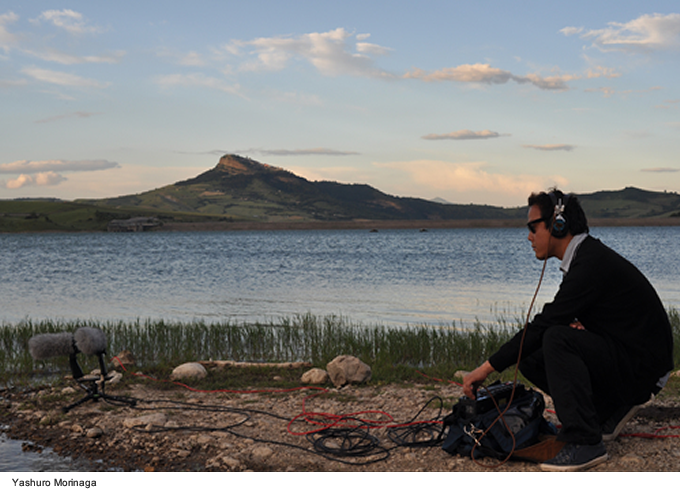 His versatile approach on sound design characterizes the high number of works exposed in some of the World’s most important cinematographic festivals: Cannes, Venice, Berlin, Toronto. His live performances take the public to other spaces and times, through the intelligent use of sound narratives concerning recording and manipulation. He is the founder of “Concrete”, a project that is both performative event and academic meeting at the same time, and takes place every year in Tokyo. He has recently been the curator of The Cloud of Unkwowing, the sonorization for Padiglione Singapore at the 51a Biennale d’Arte in Venice. 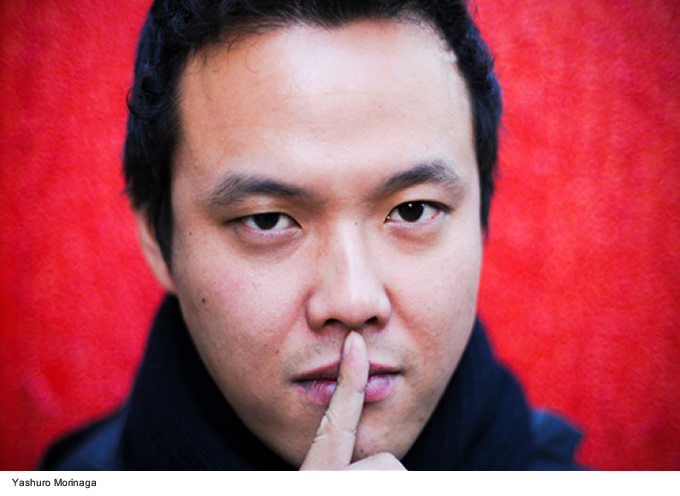 Pasquale Napolitano: You had a long experience in field recording and performance in Irpinia and you are ready for a long tour of sound experiences in Italy and Europe (in Florence at Tempo Reale Center, and then at IRCAM in Paris and back to Irpinia once again). Where is this path leading you? What are your feelings about “the sound of Italy”?

Yasuiro Morinaga: My interest for Italy comes from cinema most of all. I have always been fascinated by it and I have always supported Neorealism, with particular attention for dubbing techniques and soundtracks. As for your question, I found Italian architecture radically different from Japanese and other countries’, for Italy’s long and glorious history distinguishes it from all the rest. In Italian churches, for instance, you can perceive uncommon sounds not audible in Japan.

You can feel this sound diversity even in the architecture of bells and in the noise of leaves bending to the wind or to the passage of a car. After staying in Irpinia for a long time, working on a project consecrated to the third year of their earthquake I also could explore the difference of sounds between that territory and my Japan struck and flooded by the tsunami six month ago.

Being sound an invisible means, I think the time has come to understand how to preserve it, as expression of space and time, intended as historic moment, using the same procedure employed for the study of landscapes or architectures.

By recording sounds from Irpinia and putting them into a relation with old ones, their mutation in the course of thirty years is undeniable. If those thirty years old sounds would not be recorded, they could not be heard today, and this goes on for today’s sounds that will certainly be different in the future. 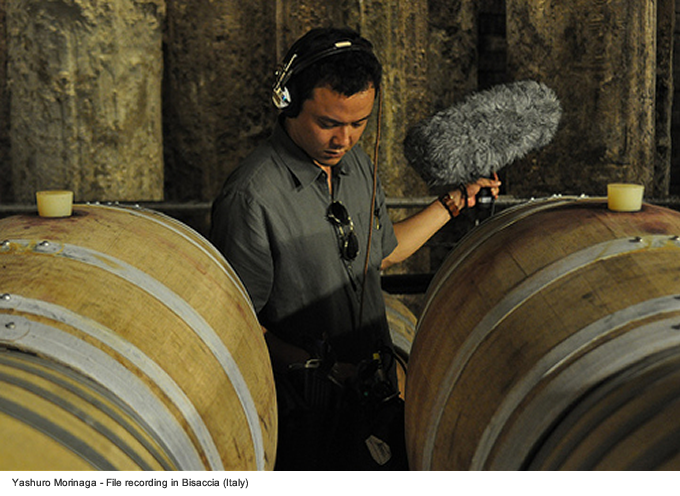 Pasquale Napolitano:You are a great field recording specialist. What is your approach to this practice? What is the kind of relationship among landscape and soundscape in your work?

Yasuiro Morinaga: Sound recording means a fundamental work of research to me. A research digging first into a place’s history and origin, and then passing through technical aspect (microphones, recording supports to be used, and so on…), but the most important phase has a cultural character (anthropological, archaeological…).

Pasquale Napolitano: How does it born the project “Concrete” instead? How is it evolving?

Yasuiro Morinaga: The project’s name has two fundamental meanings: on one side it reminds of concrete music and sound, on the other it refers to the concrete. A hard material covering the past. The project opened with the organization of a International study circle, and then passed to cinema, installation and performance production, always keeping a kinetic approach, for we firmly believe in sound’s kinetic value. 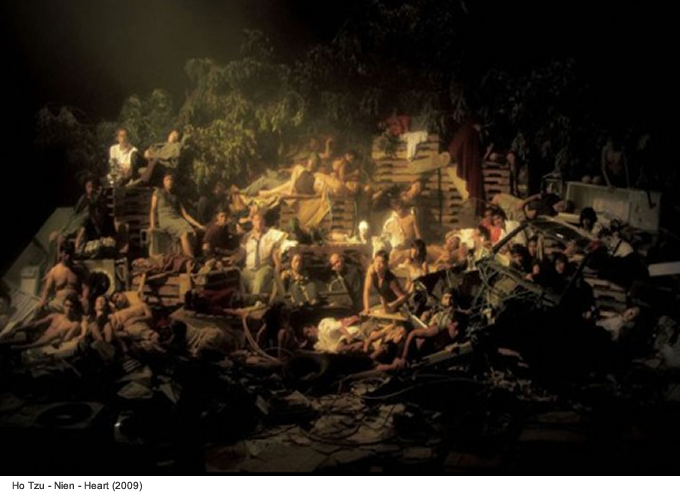 Pasquale Napolitano: You lived important experiences in cinema as well. I remember well the sonorization of Earth (composed in collaboration with Stefano Pilla and conceived to support live images), short clip of 2009 by Singaporean artist Ho Tzu Nyen, chosen even at Festival del Cinema di Venezia, as Karaoke, another 2006 work of yours. It is interesting to see your approach to this art form, very different from field recording and performance live in so many aspects.

Yasuiro Morinaga: Actually there is tight connection between field recording and cinema, though it could seem otherwise. In cinema, in the same way script, plot, dialogues are studied, sounds must be planned as well, for they are everywhere. When there is no dialogue, it is the sound that comes in describing spaces and situations. Even silence makes sound in cinema, if only for the grind of the film. First of all I work on the script, trying to analyze it, understand it, and then I think about how to record sound.

In the traditional sound design of cinema, dialogues have a mono nature, while the environment are recorded in stereo or surround and the rest is added in post-production; my approach is completely different: I try to reinvent the technical procedure, and consequently the aesthetical one. I often use contact microphones, or piezoelectric ones, or unusual technologies of microphonation for the voice. In any case, I try interpreting the script under a sound point of view.

Pasquale Napolitano: In my opinion the work you do is recognizable for the way you manage to stratify sound. I was thinking about your work on noble milk made for Interferenze, or Land of Desolation, your work on the Philippines presented here at Pescara. What are the artists, not necessarily coming from sound art, that contributed to your education?

Yasuhiro Morinaga: I have always been fascinated by Matsuo Bash, important and uncommon Japanese author of Haiku, whose main feature was to stay silent, listening to nature and finally trying to put it on the paper. In the same way I try to expose nature through sound, after I plunge in. I consider field recording as the most similar form to Haiku. 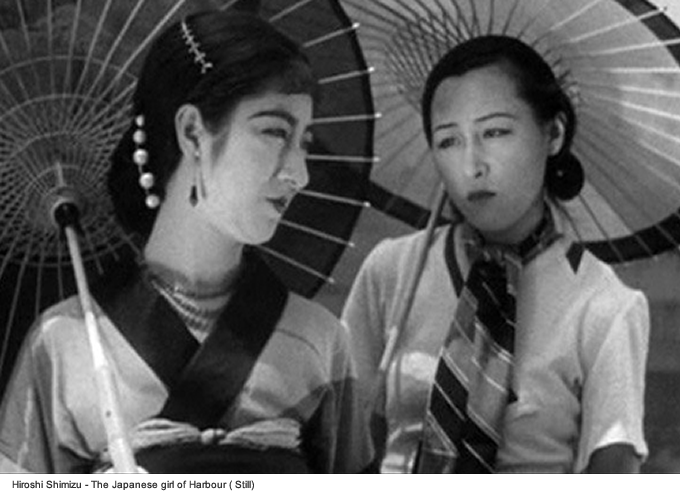 Pasquale Napolitano: What are you working on at the moment?

Yasuhiro Morinaga: Among the many projects I am carrying on, there is one featuring the sonorization of one of the most important Japanese silent movies, The Japanese Girl of Harbour, shot in Yokohama in the thirties (1933) by Hiroshi Shimizu, one of famous Yasujiro Ozu’s collaborators, a sort of road movie ante litteram.

Its peculiarity lies in the fact that I will be recording sounds in the same places where eighty years ago Shimizu shot the movie; the project involves Roberto Paci d’Alò as well and it will end at March 2012. Nonetheless, within a few days I will be in Florence, where Centro Tempo Reale asked me to write a new track for PAESEGGI. Un mondo di suoni e parole, fourth edition of the festival of Tempo Reale, entirely dedicated to Le Città Invisibili, Italo Calvino’s masterpiece.