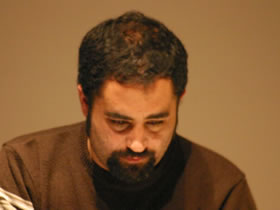 Murcof is like his music: a concentrate of classicism and modernity, quiet and tension, maniacal precision and tendency to the laissez fair. Murcof real name is Fernando Corona and he was born in Tijuana (Mexico).

A Murcof‘s concert is never a banal experience, and frankly this state should be enough to define him as one of the greatest electronic musician in circulation. His third album Cosmos is coming in the first months of the 2007 always produced by Leaf . I had though the privilege and the pleasure to listen to some of the tracks at the Club to Club festival in Tourin and at the Cinematic in Brussels . Murcof confirms his indisputable talent and his compositional intelligence in searching a deeper and more effective dialogue between the experimental electronic music and the classical music, or better the electro-acoustic.

The efficiency of his musical formula reside in this dynamic contraposition and reached now a new maturity and a deeper penetration. From the first Martes to Rimembranza, the equilibrium between the different parts of the composition, the autodidactic precision and the obsessive cure of the details, the atmosphere of the sound both sweet and majestic, the complex equilibrium between silences and samples: all this makes him one of the key figure of the modern evolution of the electronic educated musician-composer. We consider in this whole also his parallel project Terrestre , musical side of the bigger project Nortec , collective of Mexicans musicians, dj’s and graphics, that goes on with the same efficiency even if it is not so cuddled as at the start.

Murcof is the living example of the possible dialogue between the “high” electronic music and the techno one, with his collaboration with musician of every kind, his way to write and realize music, his compositional intelligence, even in its autodidactic and uncultured form. A cocktail of quiet explosion, that I had the pleasure to meet and interview in the occasion of his live audiovisual set at the Cimatics festival .

Marco Mancuso: Fernando, you have always been intentioned to create, with your music, a bridge between the audience and your performance. I’d like to ask if in this new audiovisual project based on Cosmos music the images are important to reach this aim.

Murcof: The images can both help and obtain the opposite effect. In the public there are people who don’t need images at all, they simply close their eyes and give their own vision of the music. At the same time, some others need to receive from the artist a more complete concept, both on the video and sound side. They need the images to complete the music, in order to capture the entire idea that inspired the artist.

Marco Mancuso: Do you think that when you produce music, you write in order to involve the public?

Murcof: I never think to the public. I think the most efficient way to involve the public with my music is to be satisfied of my music myself. You can definitely ear when a musician works in a different direction, when it thinks to the public, when it has commercial interests. You can clearly ear it.

Marco Mancuso: Since your debuts, you’ve been involved in the creation of a bridge between classical and electro music, between the warmness of the acoustic instruments and the coldness of the digital. How does this tension work during this moment of your career?

Murcof: When you’re done with a track and you’re happy of what you did, only after that you reflect on what you’re doing and what direction you’re following. Now I want to create this mix of classical and electronic, trying not to ear the two as separate elements, so that the acoustic sound can effectively combine with the electronic one.

Marco Mancuso: Did you study music in the academic meaning of the term?

Murcof: Only a little bit of piano and cello, but long time ago. I come from a family of musician and my father can play lot of instruments, he was a member of the Buncho Records in Tijuana . I’ve always been surrounded by music, even the non electronic. My father bought a disc of Jon Santos interpreting Bach and one of my father friends gave Oxygen by Jean Michel Jarre and this is the point where I started with the electronic music.

Marco Mancuso: Did you ever used acoustic instruments or collaborate with classical musicians?

Murcof: Well, I worked with Francesco Tristano who’s a classical pianist, who revisited Berio and Frescobaldi in a techno version: he’s from the classical world, we still have some projects together and I’ve helped him out producing his album. We’re preparing the material to play a couple of concerts, with a pianist from the Ramì Khalife , Lebanese.

Marco Mancuso: You have an approach to music that reminds the creation of soundscapes . Have you ever worked in a soundtrack and what do you think about the live cinema projects?

Murcof: Yes, a couple of nights ago i did the live soundtrack at the Cinematech for the movie Metropolis and in Mexico City I did something similar for a Mexican film. It’s live in the sense that I’m there physically, but I obviously prepared everything before, so you cannot talk about real live cinema. I also worked in original soundtrack: La Sangre Iluminada , by Ivan Avila, a beautiful movie that will be hardly reproduced in the cinemas, a real metaphysical drama.

Murcof: In fact he’s called the new Jodorowski , he has a lot in common with him. I loved working with him, he’s so surreal. It is completely different for a musician to work in a movie. The film evolves with the images: when you are a musician and work with the images, they are your last thought. When you work in a movie, images are a real external input and your music must evolve in relation of them.

Marco Mancuso: Last question about your new project Cosmos. What does it have differently from the past, which are the new direction of your music?

Murcof: All of my works reflect a precise moment of my life. For example the first album correspond to the bornt of my son, the second to the dead of my mum, this third is the move from a continent to another, as I recently moved in Barcelona and my interpretation of life changed. Cosmos is a celebration of our existence, of the universe: we must see beyond the skyscrapers around us, look above, look the star and the sky.

Marco Mancuso: Do you think the music reflects this approach?

Murcof: I hope so, it would be amazing. I played some tracks the other night at the concert and the atmosphere was perfect anyway I never think too far in the future, talking about my music and what it will be in ten years for example. I try to think time after time, as composition of events that can change your way to think and even approach the music. I dislike making programs, most of all in my music, I’m free as it is.

Marco Mancuso: In the electronic world there are several musicians in the academic meaning of the term. Real composer. At the same time, there are other electronic musicians objectively appreciated even in the academic world, as they want to open the dialogue between this two world . What do you think about this type of approach and how do you feel as they consider you as a composer?

Murcof: I don’t like this type of programming in my job, I like to think at it as a consequence of my way to approach music. It is a perception from the outside, a consequence, not a tendency to be recognized as a composer. The most important thing is your music, the composition, the technique you use, no matter if classical or technological. In any case I don’t like thinking at the music as divided by etiquettes. In the end music is music and it must considered music in my opinion.