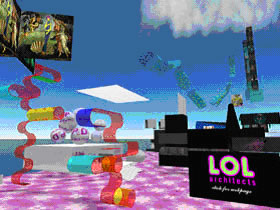 In Second life there’s no need to sleep, drink or eat, it’s not cold, but there are houses just like those in the real world; kitchens, living rooms, bed rooms, and they are solidly anchored to the ground even in the absence of gravity, with a roof even though it doesn’t rain and stairs to go from one floor to another even though you can fly.

There are also places planned for social life, meeting places, museums, completly abstract environments. An interesting reflection about SL can be found in the work of the group LOL architects , founded in the spring of 2005 by the students of the fourth year of architecture of the Royal Institute of Technology in Stockholm.

I meet Kapital Metropolitan, professor of the Production of Architecture course at The Office while he is dancing in front of the Billboard with the final presentation of the projects. Just a little time for a few gags because at the same time the real party is taking place for the end of the eight week course held by him, that is by Tor Lindstrand and by Palle Torsson. They are drinking and enjoying themselves with all the students and they tell me that in that precise moment they are being projected onto a four by three metre screen in Stockholm.

A strong mix between the real and virtual world the characteristic of all the courses that take place in part in the classrooms and in part in Second Life. The course takes into consideration historical, theoretical, and practical aspects of the representation and planning of architecture and analyses how the systems of projection have n effect on our understanding of space, through the evolution of media such as painting and photography upto 3D environmets. SL has been chosen as a 3D platform for experimenting new forms of architecture, the projects have been carried out using modelling tools at the disposal of all the residents and are exhibited at The Office , the world’s largest virtual architecture office, a whole island headquarters of the LOL architects.

Taking advantage of the party, I’m able to meet some of the members of the LOL architects. I speak to Raplaa Lazarno , all black with a slender body and a big head with two white eyes that is exhibiting his project: 3D Graffiti, making Graffiti in an architectural way.

He asks me to follow him and he takes me in front of a slide show of one his creations of 3D graffiti on the buildings in Second Life, green 3D objects, small geometric shapes applied on the faces, roofs, and windows. It is the logic of graffiti, signs left on the city, but in this case, they are not permanent and can be removed at any time. I ask him if they are seen as shapes with a composite function with the building, if the owner of the building sees them as works of art or vandalism, but the problem seems to be unsolved like the graffiti in the real world. Amusing are the photos published by Raplaa of his works with the information of how many days/hours it took the owner of the building, to remove them or to return them to the sender.

Lavande Pixel/Magnus Nilsson speaks to me about his project YURT++ inspired by the antic tents of the central Asian nomads, Yurt to be exact. Comparing traditional architecture to open source software, both built by their own users, up dated and finely tuned for centuries. The objective of the project is to take the evolution of the Mongolian yuth into SL and adapt it to the new living demands of the avatar. I go back to The Office several times in the following days to visit other projects.

There is a building which is a 3D travel guide for beginners in SL, it presents places, people and events. There are experiments on sound spaces, on surfaces and modules for the building of a temple. Go into Treat, A Museum of Sweeden, di Annida Hogsander/Vava Vavoom, through a short corridor that represents the brief Swedish summer into an almost dark room, the long Nordic night, in which we see images and texts about the northern light, about the effects of the midnight sun, the experience of darkness. A sensory route, like in the best museums.

Public Memorial Place di Elin Pääjärvi/Elke Rinkitink is instead basic architecture, bare, with spaces that induce meditation in this building, which was thought of as a monument in the memory of redundant avatars. Inside there is a billboard with the photos of the avatars that have gone astray, and then a ramp to follow in a suffused environment that wants to induce us to contemplate and remember, while going up to the platform of the Memorial Speiceflight . All of the instructions to send into orbit a portion of our own avatar are engraved on the floor at the entrance of the building.

I fly around a refinery, an architectural element in itself that outlines a landscape, impressive with the smoke and the flames coming out of enormous chimneys. The project of Clara Lundeberg/Canone Vavoom beyond a scenic element it becomes a game and the refinery, completely reinvented in its function, it turns into a giant slide where it is possible to let oneself fall down the chimney into a long purple vortex.

The surfaces and the materials only have a symbolic value in the virtual buildings. So says Aksel Grip/Vince Callisto who tries to mix organic shapes and built structures, buildings and nature in a garden of texture rolled up around itself that create a almost completely abstract environment. Very pleasant to walk through, one of the most beautiful I saw in SL. It is outside, exploded in space, we see the constituting elements of the structure that explicitly declare the modules and the primitive starting point of the building.

In this and in many other works exhibited necessity itself of architecture in SL is put under examination, unhooked from many of the living space needs. The

In these projects we find important research of how to conceive and project virtual worlds, fundamental for giving shape and sense to places that we more and more often frequent and live online, new spaces for socialising and meeting, studying and working, without squashing them onto a bad copy of the real world. To explore the architecture of tomorrow already today, as the LOL architects say!.