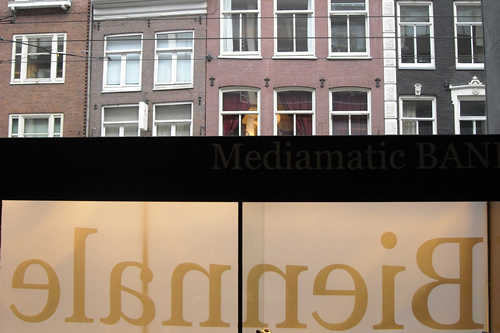 The Mediamatic travel project, carried out by Mediamatic Bank, one of the most important cultural centers in Amsterdam and in Europe, is ready to turn the world of cultural tourism upside down. If you connect to the following websitehttp://travel.mediamatic.net/, you can find an endless list of cities, spread all over the world, with which it is possible to interact following definitely innovative approaches.

For a small outlay you will be able to go to your chosen city and to get in touch with the contemporary artistic scene thanks to a local guide on that specific field, or you can simply get some information about certain places which escape the standard logic of pocket travel guides. Trails expressly created for artists or people dealing with art who will be able to explore cities following completely different points of view. Furthermore this project also includes an exhibition, on which I particularly wish to focus my attention on this issue.

From October the 16th to January the 3rd in the cultural institute Mediamatic Bank it was indeed possible to visit The Amsterdam Biennale 2009, an exhibition in which different countries from all over the world participated under the leading of, more or less, 30 international curators. Each of them was given the responsibility of managing a pavilion and of choosing the artists representing a specific city. Each week new pavilions were opened to the public and followed , of course, by a related night party, full of surprises.

As soon as you got inside the exhibition space, you could find yourself walking in between narrow paths, through cubes and squared spaces, each of them dedicated to a different city. The place now and then gave the impression of being almost claustrophobic and sometimes unfortunately it was hard to spot some of the art works because of the lack of space. The main theme was definitely the political one and that is why I decided to focus on this subject.

The Munich Pavilion for example(http://www.eindeutscherpavillon.de/ ) , taken care of by Sasha Glasl has been inspired by the recent celebration of the 20th anniversary of the fall of the Berlin War, he has thought of build a wall as well made up of transparent boxes. These boxes are delivered only to those Germans that are interested in the project, and who will be asked to fill them with mementos of their country. It’s a traveling wall as well, this means that, from month to month, the wall will move around going in Europe, from a country to another, picking up the scattered mementos at each step till it will end its route right in Germany where it will reach its maximum expansion. But this is just the end of the first phase because then the wall will be sent to China to undergo an opposite process. In this case indeed the visitors will be allowed to dismantle the wall bringing home one of the boxes and deciding then if to contact the person whose memento they have taken.

An alternative way to build a positive sense of belonging to their own nation. A wall rich with history too, but a history shaped by people’s own memories. The identity of a nation expressed without any kind of imposition, without being subject to any political pressure.

The Istanbul pavilion (http://www.mediamatic.net/page/124558/en) , with Suat Ögüt as curator together with the artists Firat Bingol and Mehmet ?güt , has exhibited four works dealing with problems related with the cultural policy of their country.

In Firat Bangol‘s video, a Kurd is in fact busy explaining his personal story, but every time he tries to talk about it, a vacuum cleaner is pointed to his head, as a gun, with the clear intention of sucking away his identity leaving him without words. Every time the “instrument of torture” disappears, the man begins talking again but each time the tone of his voice increases and becomes more and more exasperated. So as a matter of fact, the repression which he is exposed to, is fueling his resistance and the sense of belonging to his people.

Mehmet Ogutcontributed with a video belonging to his Black Cube series, with the aim to make us think over the existing relationship between the people who own the power and those who are subjected to it.

On a small screen we can clearly see a policeman in the act of beating a civilian with a baton: the scene takes a few seconds because almost immediately the two characters start to undress remaining both in underwear for a few instants under the same conditions. An exchange of clothes take place between them and consequents an exchange of roles as well, showing us how the former-civilian, after having worn the uniform, will not exempt himself from being violent.

The Pavilion curator Suat Ögüt tested himself with two works: Consumption Practices and Safety Guide. The first is a video that shows alternative ways to experience homologated spaces, as restaurants and clothes shops, introducing unexpected deeds that result in entertainment, to escape, somehow, to the social control and in this way reinventing, the spaces that are used for other purposes. The second is instead a sort of audio-guide which accompanies us along a street through the tales of the small traders, showing us both their creative and dark side. The voice talks and tells us where to look to find our way through the puzzle of Istanbul pictures just in front of us. A new manner to explore a city, in some ways, I would say even funny, getting to know it through people living there in a period of change where the old is facing the new and where often paranoia is the only one to speak.

Another very interesting pavilion is surely the Kabul one. This pavilion tells us about a city that after the falling of the Taliban regime in 2001, has filled itself with foreigners coming from non-governmental organizations, from UN, or from embassies for security reasons have been separated from the population and have started, living their life in the “green zone” that, step by step, has spread out absorbing a good deal of the city center raising up protection walls. The relationship between these people and the Afghans is reduced to the minimum , if not entirely avoided.

To symbolize this division the curator Robert Kluijver (who lived 6 years in Afghanistan) has put two arrows at the rear of the Pavilion to point out the existence of two different entrances, one reserved to the foreigners, the other one to the Afghans. When you enter the Pavilion this separation continues because we find two maps of Kabul city, placed one opposite the other. On one map you can see the off limits areas to the Afghans and on the other one the off limits areas to the foreigners. The contrast then is even more stressed by the presence of some pictures around the maps with related explanatory notes showing all the places or the activities carried out by the two different sides. At any rate, after the fall of the regime, the city of Kabul has been active in new fields such as art, poetry, design: everything has been possible thanks to the new freedom of expression, to the influence of other countries and to the access to new cultures.

In the Lima pavilion the main subject is the censorship to which artists are subjected, so it is a harsh criticism against the political class of the country and the education system.

The Beirut pavilion is impenetrable except for some holes and “excoriations” through which it’s possible to catch a glimp of pictures portraying the daily life of the city. A way to tell us that we must leave the memory of the city destroyed by the war behind us and move on to the present one that will only know when we visit it.

The Brooklyn pavilion is only composed of two benches between which 3 take away piles of newspapers arranged. On the cover page is written “Art work: a national conversation about art labor and economics. Take a copy. Make an exhibition. Host a discussion in your town”.

Whereas on the back is written “Art workers won’t kiss ass” (you can download a copy from http://www.mediamatic.net/page/126816/en). So once you have downloaded the contents you’ll be free to decide if to spread their piece of art talking about the arguments they had to face by organizing an exhibition or starting a debate.

The Naples pavilion, has been entitled by the curator Diana Marrone as “the kingdom of intallio” . Intallio is a word in the dialect from Naples that explains the behavior of its inhabitants trying to get as much as possible from life, experiencing it with the right balance without being ruled by anxiety.

Only the artists able to look into the depth of the city have been chosen, each of them using a different mean (video, performances, photos). Despite the fact that the theme was studied in details the pavilion instead shows a clear lack in organization, conveying a quite confused idea of its contents.

The work that most of all stands out is definitely the one by Alessandro Cimmino who participated with an analogical picture, shot on some Naples roofs, of extreme beauty. Besides showing the details of part of its typical fabric of the city, this picture conveys a strong feeling of restlessness, due to the sharp contrast of light, of the soft colors of the houses with their impenetrable windows expressly recasted in black.

A vision of a city and of its inhabitants that have to face a sort of blind alley. Maybe a hint to the news that are often bundled up in newspapers when dealing with Naples.
Nest, a project related to the city of Naples and its suburbs, dealing with art, public spaces and urban transformations, takes also part to the Naples pavilion and I strongly recommend to visit the website.