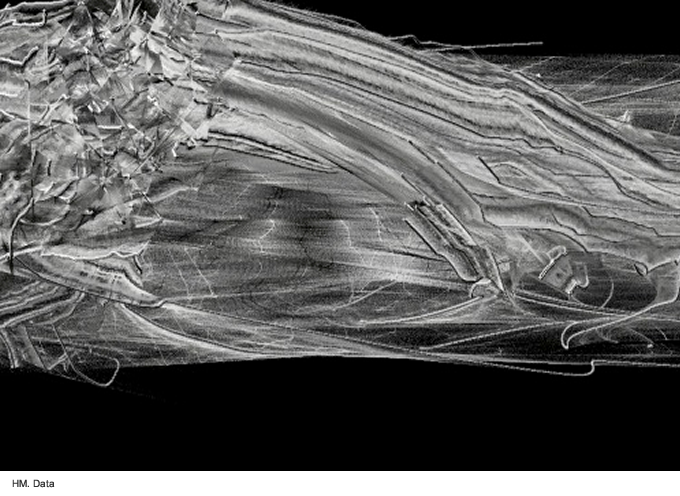 Xu Wenkai, who uses the name Aaajiao in most exhibition and other public contexts, was born in Xi’an in 1984 and currently resides in Shanghai. His name is widely known within both art and tech circles in China, though mostly for his efforts at organizing and sharing information rather than as an artist per se. New media artist and computer visual programmer, he created in 2003 the online sound art platform: cornersound.com and in 2006 the english version of the we-make-money-not-art blog We Need Money Not Art. Without forgetting his collaborations with the Dorkbot network and with the 3S Media Center, center for academic research in art, media and technologies.

While recent years have seen heightened participation in the international exhibition and performance circuit, I would venture that his most significant aesthetic contribution to new media in China is a social one, acting as a vector for the interpretation and communication of international and local trends in the usages of software in artistic practice. He is a skilled programmer, particularly with Processing, and his active involvement with the non-commercial side of the tech development circles in China has proved highly profitable on an artistic level for his major collaborators, including curator Li Zhenhua, musician B6, gallerist Ed Sanderson, and a number of architects.

Though he is far from a pure engineer with no interest in the art world, Aaajiao does represent a tendency towards more rigorous engagement with the technologies and cultures of emerging software practices on their own terms, a far cry from the earlier new media artists in China who contracted the execution of their work out to glorified factory settings. 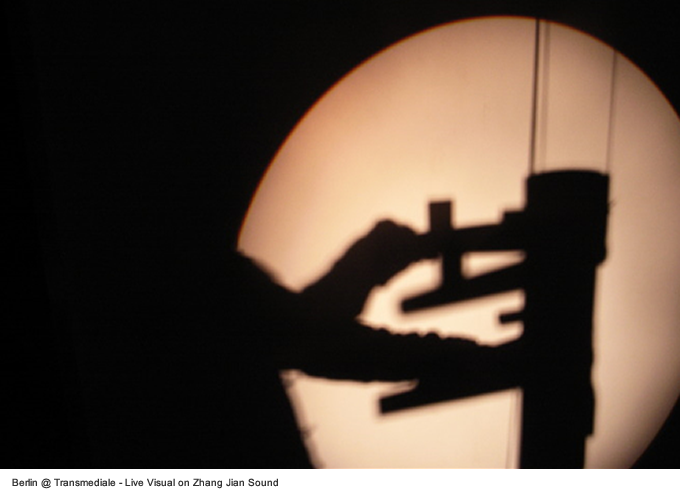 Ultimately, much as Ai Weiwei‘s activist work has become accepted as an artistic practice, Aaajiao‘s organizational and technical contributions are beginning to emerge in an aesthetic light largely of their own creation

Robin Peckham: Why have you taken the name Aaajiao?

Aaajiao: Some years ago I used to download mp3w on Soulseek, where my ID was “chromatic_corner.” In the SLSK chatrooms everyone thought that was too troublesome to use, so they started calling me “A Jiao” [“a” preceding a single character name in Chinese is an expression of familiarity, while “jiao” means corner] until I registered a new ID as “aaajiao,” so as not to conflict with anything else already taken.

Robin Peckham: Tell me about your performance this year at Transmediale. Were you running live visuals? Had you worked with Zhang Jian before?

Aaajiao:Actually there wasn’t really any preparation, I had mentioned to Zhang Jian that I wanted to perform so we just got together and did it.

Robin Peckham: What do you think of working with the experimental electronic music scene in China?

Aaajiao: I don’t find much exciting in the Chinese experimental electronic music scene, but I do like collaborating with intelligent people like Zhang Jian and B6. They’re all very smart people, so working with them becomes interesting, and performing can be a bit addictive. Visual art and music can result in exchange whenever there is consensus or agreement, without any exacting requirements of shared points. 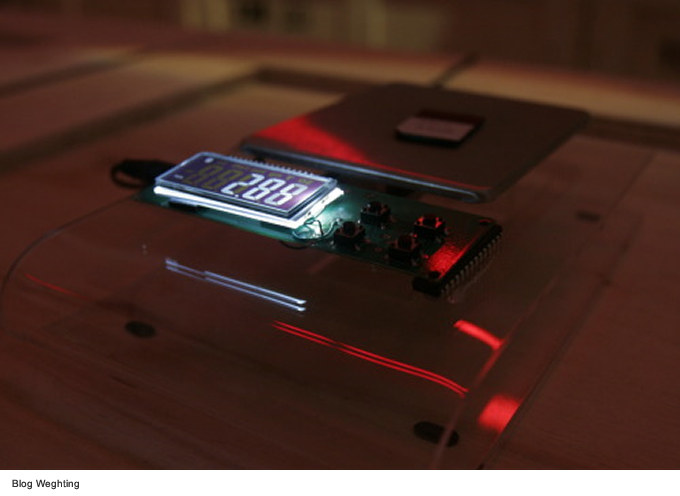 Robin Peckham: How does Blog Weighting process and convey its materials? In other words, how do you convert data to a material presence?

Aaajiao: The original data comes fromhttp://web.archive.org. The method is very simple: I collected ten years of screenshots and HTML source code from this blog, then saved it to an SD card. The media of any storage memory has mass in real space, a simple fact, so the question is that of the actual change in this media after it has accumulated data.

Robin Peckham: What does the piece tell us about the permanence of data that you mention?

Aaajiao: What I want to convey is that data may be an incredibly meaningless thing.

Robin Peckham: How do you make the visuals for HM.Data?

Robin Peckham: For you, what is the difference between performance and exhibition contexts? 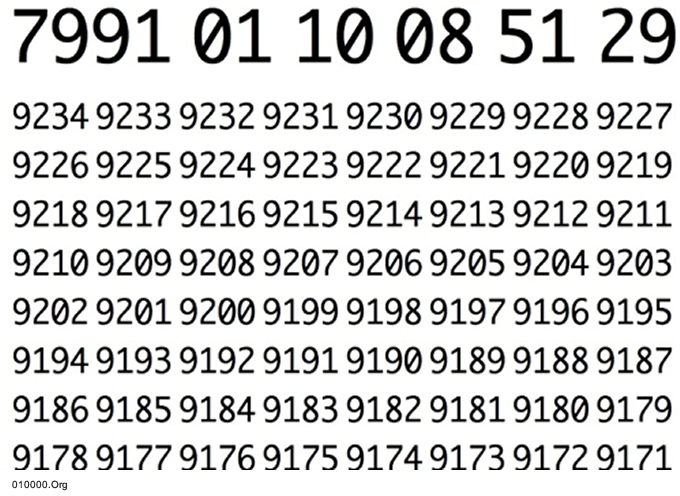 Robin Peckham: With these generative processes, are you interested in the mechanisms or in an emerging aesthetics of the algorithm?

Aaajiao: In terms of the process, it’s a very exciting sensation that there is no way to control every detail of a process. It’s a struggle for balance between you and the program, always wanting to control the result but generally failing.

Robin Peckham: 010000.org s essentially a glorified countdown clock. How important are the attached theological and cultural issues for you?

Aaajiao: The religious and cultural questions are Li Zhenhua’s preferred method of elaboration. For me it is the question of the eternal in data, and the problem that the contractual obligations of data might be even more eternal.

Robin Peckham:Is the contract between you and Li Zhenhua an essential component of the piece?

Aaajiao: The contract is the main body of the work.

Aaajiao: It has not yet been realized. 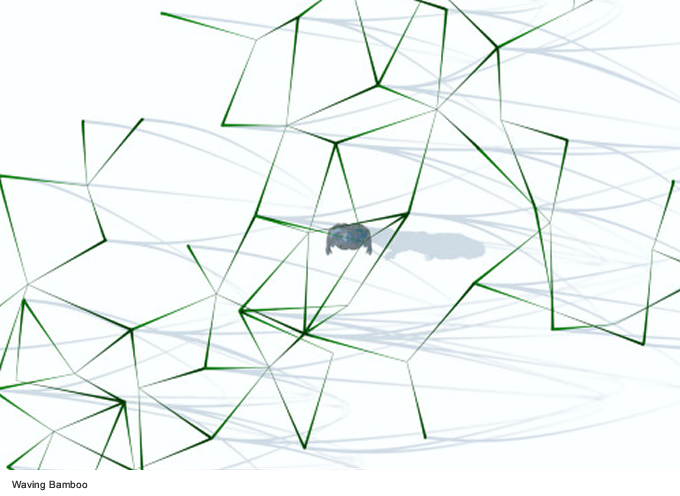 Robin Peckham: Bamboo seems like an obvious choice, but why did you choose this acorn woodpecker in particular? Why not use some human structure to build into the bamboo network?

Aaajiao: The architect with whom I collaborated is interested in the materiality of bamboo–inexpensive, easy to shape–but we weren’t thinking of magnifying its material properties. My older sister spent five years researching these birds for her PhD. at UCLA, and since we needed a certain degree of accuracy I chose to work with this access to firsthand materials and direct exchange.

Robin Peckham: What does this particular assortment of species offer us?

Aaajiao: Since it was never realized I don’t know what the results would be.

Robin Peckham: How does the idea of the network influence your design process in general?

Aaajiao: The network runs through all of my work. 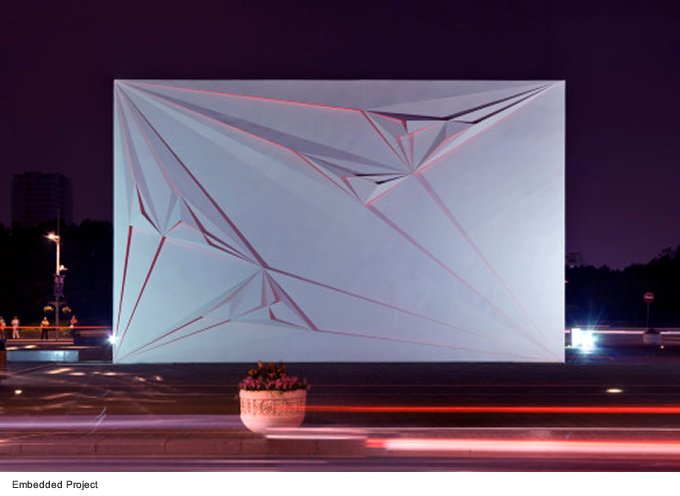 Robin Peckham: I’m most interested in your Embedded Project, a collaboration with Wang Zhenfei and Wang Luming, which gestures towards both complexity and engineering in its mediated architectural interface. The human interface is always unclear–why is this important? With N-Queen, City on the Sea, DLA Village, Gothic, L-System, Bundling, Sun Shading, Tangent Tower and Fractal Campingto what extent are these actual explorations of problems in urbanism, and to what extent are you working with more abstract ideas and processes?

Robin Peckham: In Cube Data, what kind of data do those numbers represent?

Aaajiao: Meaningless data intended to add levels to the performance.

Robin Peckham: How do you see this distinction between content and form, and how does it affect your process?

Aaajiao: I hope to be able to distinguish between form and content: especially in algorithmic video or performance. Visual stimulation is pure excitement, without any additional concepts.

Robin Peckham: Same with Cube Cell: when these are performed, is the aesthetic execution of sound and light as important for you as the original data manipulation?

Aaajiao: Equally important. Cube Cell is an experiment in performance transformed into installation, but the result was a failure, though I intend to keep working on this series in the future. 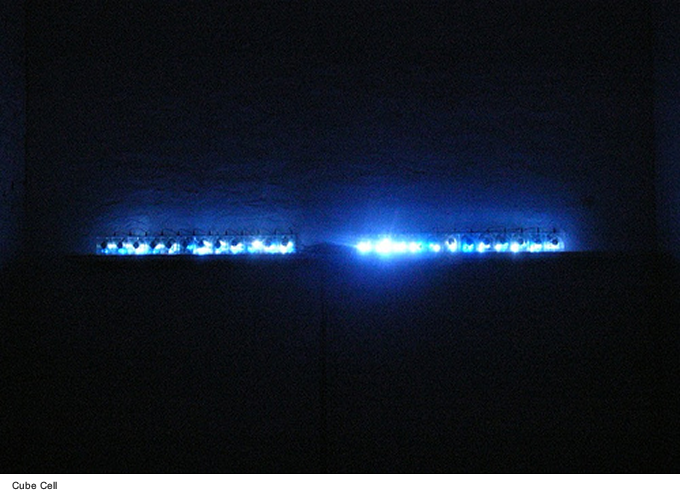 Robin Peckham: Perhaps alsoJelly Data. Where does that data come from? Does it verge on pure animation if not enough generative manipulation occurs?

Aaajiao: Purely visual stimulus, so you could call it highly skilled animation.

Robin Peckham:Recently I’ve had a number of conversations with artists about media art in the age of generative processing. Personally I feel that such methods can be a starting point, but the artist is typically best served by attempting to control the final result to some degree. Often times it becomes somewhat wasteful: the artist finds an interesting subject to represent in data, but does not necessarily have a concrete motivation for utilizing a generative process. How do you approach this tension?

Aaajiao: I absolutely agree. My work for the solo exhibition in September will be very different. For me generative methods have become little more than a technique.

Robin Peckham: Tell me a bit about your involvement with the organizations you work with, namely We Need Money Not Art, Dorkbot, and Xindanwei. How do these fit in with your practice as an artist? Are you invested in this shared infrastructure for sharing information and ideas?

Aaajiao: It’s a process of mutual study. These organizations all give me more channels to be in contact with new concepts and people, very exciting. I always hope to create more such channels, though it’s unclear whether in the end I’ve been turned into a channel or whether I control the channels.. 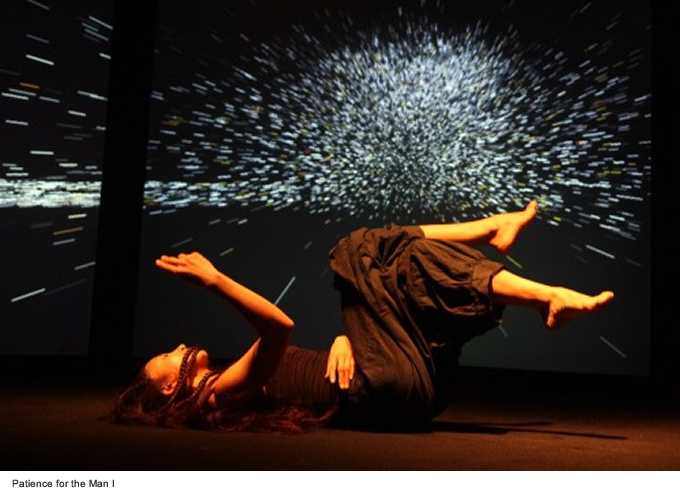 Robin Peckham: What ongoing or incomplete projects are you working on no

Aaajiao: My September exhibition will involve a number of actions, as well as the completion of several earlier series. I’ll be releasing several iPhone and iPad applications in August.