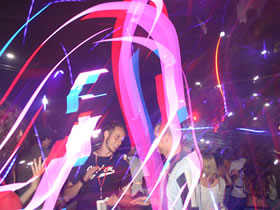 It’s time to celebrate Sonar ‘s 15 th birthday, the annual and unique festival of electronic music and new multimedia arts, that doesn’t need to be introduced.

The Barcelona festival, that has become a real and authentic center of current trends in electronic arts, despite many critics and detractors, is a unique event that gathers many offerings in music, cinema and multimedia arts contexts.

Also for this edition the chosen locations during the day are those of CCCB-Macba , that, in this particular occasion, has become a concert park in the middle of the city, while during the night the festival is set in Fiera Gran Via. We arrived on Wednesday and we were already in the middle of Sonar.

Thursday 19 th : opening day , not too busy with a not so attractive program. We remained under the fresh tent of Sonar Dome for almost the whole afternoon, attending in a detached way the jazz, funk and soul concert of ASSTRIO , a Spanish group. We moved to Sonar Village and we listened to the excellent futurist hip-hop by DJ2D2, an artist of the interesting Boom Sound Collective, who was already appreciated in the last edition.

The first show that called our attention was the live show of PRAM, in the Sonar Hall; this British band has a large discography, they worked with many labels such as Too Pure and Domino. Their peculiar sound is a mix of electronic, jazz and dub and they perform on stage with different instruments: bass, guitar, drums and synth.

We went outside and we discovered the first festival surprise: BASS CLEF. This British guy, who is called the “hackney dub master”, with his live show enchanted us and brought us into the analogue dubstep world: he performed with trombone, theremin and toy instruments such as whistles. Respectful of the genre’s Jamaican roots, he charmed his audience: a successful artist.

The most beautiful show was that of PAN SONIC: during their live shows everything can happen. It often depends on the duo’s mood, but in this occasion Mika Vainio and Ilpo V äisänen proved to be the kings of avant-garde electronic music: with their incisive and effective sound they hypnotized their audience, proving that the Pan Sonic machine is still alive: real masters.

Friday 20th : when we just arrived we were told about the absence of KONONO N°1 (it seems that they didn’t get the documents needed to leave Africa for their European tour): what a pity!

We started from Sonar Dome with the show case of a historic label : NINJA TUNE . The first band to perform was THE HEAVY, coming from the British south-west with a mix of funk, blues, garage and rock’n’roll: check it out.

Dj J MOUNTAIN was the next to perform; he stirred the crowd while we’re waiting for one of the most interesting artists: DAEDELUS . He comes from Los Angeles and he performed on stage what we had already listened to in Italy, a sort of DJ/live set where he mixes, thanks to some special controllers built by himself, his own tracks with others’ tracks (Aphex, Madlib, Portishead…) in Daedelus style: the audience was hypnotized and glad: magical. The other project Daedelus performed in Sonar Dome was less thrilling: under the name of Long Lost he arrived on stage with his wife, Laura Darling, a psychedelic and melodramatic show that is not so effective in a live show because it is more appropriate for intimate places.

Then, we moved to the central stage to see the performance of QUIET VILLAGE, i.e. Matt Edwards (Radioslave/Rekid) and Joel Martin ; the performance, at 4.45 p.m., not the perfect hour, didn’t leave the mark, even if their album Silent Movie (!K7) has been one of the most important albums in 2008.

We were curious to listen to the live show of KALABRESE and his RUMPELZIRKUS ORCHESTRA because they were very successful thanks to their album in 2007; the concert was amusing and the Swiss producer, acting as a drummer and a showman, mixed disco-funk with electronic music: playful.

Let’s not talk about the boring show of the electro-rap duo YO MAJESTY, and let’s talk about the talented American rapper JNERO JAREL, the author of excellent albums, under many pseudonyms such as Dr. Who Dat and Shapes Of Broad Minds, with the Lex Records label. He presented at Sonar under the name SHAPES OF BROAD MINDS, with a drummer and a DJ; we felt that, despite his experience and his effective tracks, he lacked creativity in live shows: unconvincing.

We came back to Sonar Hall to see what Tara de Long organized and she impressed us with her skills : she dominated the stage and rapped with incredible energy and style. The result was a fascinating and amusing show: you have to see it.

We went to Sonar Complex where we found the encounter between two key-bands in experimental scene of Catalonia, NISEI vs ZA. We felt fascinated by the rhythmic energy of this live show, performed exclusively for Sonar, where two drummers, three guitars and two basses created an explosion that literally caught us: unmissable.

After a quick shower we plunged into the crowd of Fiera Gran Via for the first date with Sonar by night 2008. The agenda was full and we ran from one stage to another to see the most interesting things. For the most melancholic people, MADNESS leaded off the dance in the huge area of Sonar Club with their already famous pop wave ska sound, but they didn’t call our attention so much.

And then, the first disappointment of the night: DIPLO . We were expecting a more eclectic set with a combination of hip-hop, house and break beats, but his producer (who’s also M.I.A. ‘s producer) chose a small set; anyway, the audience seemed to appreciate it.

We went again to Sonar Lab where we attended the excellent set of SHACKLETON, the co-founder of the famous label Skull Disco and the author of dubstep sound with gloomy atmosphere, deep basslines, African percussion and elements stolen from Berlin Basic Channel techno; after the performance, it was evident the interest of many techno/minimal oriented producers, especially of Ricardo Villalobos, in this artist: hypnotic.

Then, it was the turn of the Californian artist FLYING LOTUS ; we couldn’t wait to listen to him, because he is an excellent producer, working with such labels as Plug Research and Warp (his last work, “Los Angeles”, was appreciated by his fans and critics). The set was interesting and fascinating and, despite some technical problems, when “Archangel” by Burial “enters” the whole public is satisfied: fulfilled promise.

e skipped over the dj set MALA (of the British crew Digital Mystikz) that we already appreciated in other occasions, and we went to Sonar Park were it was beginning the live show of ROISIN MURPHY ; she produced many albums with the Moloko project and two perfect solo albums under the supervision of Matthew Herbert . Eventually, it was the best performance of Sonar 2008. She mostly performed tracks from her last album “Overpowered”, really effective in a live show thanks to the perfect fit of Roisin Murphy and her band that accompanied her both in the most electro tracks and in pop tracks: a queen.

Exhausted, we approached to a stage for the live show of BURAKA SOM SISTEMA , next bing from Portugal, a combination of Soca music, hardcore hip-hop and baile funk; maybe it was for the hour, but the show let us down: rowdy.

We came back to Sonar Park where we waited for the arrival of Hercules and the Love Affair , that recently published, with DFA Records, “Blind”. We had a lot of expectations and we were curious to listen to them. But the live show was disappointing, maybe because of Anthony Hegarty’s absence, who worked on three hits of the album, maybe because of the lack of that groove sound which fascinated us: we left sad and disappointed.

Fortunately, Theo Parrish was waiting for us in Sonar Lab , with a mix of funk, soul and dub that made us dance. His long experience with Sound Signature, made Parrish an important character in dance music world: we gladly finished that Friday.

Saturday 21 st : it was the last day of Sonar festival and we felt that, except few artists, the largest part of the performances weren’t so good.

The Moroccan DJ KEY , despite his good technique as DJ, offered a selection with Village People, Gloria Gaynor and other similar sounds: please, come on!

We recovered with the live set of KID ACNE, a Sheffield (Uk) MC who, despite the command of the hip-hop old school aesthetic (Run Dmc and Beastie Boys), demonstrated to be valid, also thanks to two excellent MCs and a DJ: refreshing.

We went to the underground hall to see MATMOS; Drew Daniel and Martin Schmidt have just published their new album “Supreme Baloon” and entertained the audience with a good performance; fresher than the past, with pop sounds, the duo (with laptop, electronic tools and acoustic sounds) looked great.

We came back to Sonar Village for NORTHERN STATE , a girl trio that we could call also BEASTIE GIRLS (indeed their first work, “Can I Keep This Pen”, was under the supervision of Ad Rock of the famous New York trio). Amusing, nothing more.

Exhausted, we arrived to the lounge Red Bull Academy, despite the heat, to listen to the live show of HUDSON MOWHAKE, 21 years old, Scottish, who has recently signed up with Warp; his sound is a mix of hip-hop, broken beat and electronic music. A fresh set.

At the end of the afternoon we ran into the incredible live show of BOGULTA , a duo with a mixture of punk, electro, new wave and metal; they wouldn’t make bad impression with such labels as Load or Ipepac: aggressive.

The penultimate date of the day is under the tent of Sonar Dome , where we found four Scandinavian nerds, Rigas Den Andre, Pavan, Joxaren and Daniel Savio : they let us know the sound of Flogstadanhall label. A perfect live show of instrumental hip-hop, with deep basslines and a synth used in an excellent way: talented.

We came back to the Red Bull Lounge for the set of xxxchange , a Philadelphia producer who impressed us with his work with Spank Rock for YOYOYO album. Unfortunately, we didn’t find his creativity that made him so unique but the usual 4/4 set with a piece by Santo Gold and one by M.I.A.: main stream.

Our Sonar 08 “del dia” adventure came to its end with the performance of BLACK DOG (one of the first artists to work with Warp in the 1990s) and their intelligent techno sound, as if time stopped in 1992: nostalgic.

During Sonar by night what stood out was the live show of DJ Yoda , who presented for the first time his Magic Cinema Radio , an incredible show audio-video with the support of Pioneer SVM-1000 technology: amusing.

NEON NEON, a duo made up of the composer Boom-Bip and the front man of the Super Furry Animals , proved that Lex Records is a guarantee of quality and creativity, with a good electro-pop live show: retro-futurist.

From Sonar Park we moved to Sonar Pub where Antipop Consortium, founded in 1997 by talented Beans, High Priest, M. Sayyid and Earl Blaze, a milestone of experimental rap, welcomed us with their Martian Hip-Hop, a storm of effective lyrics: unique.

So, in conclusion, we can say that this Sonar edition seemed flatter than usual, especially because of a less exciting program than the past editions. We think that the best artists were those with experience ( Pan Sonic, Matmos, Pram, Roisin Murphy, Antipop Consortium… ) and few emergent artists ( Bass Clef, Flying Lotus ).

However, the festival with its 82,000 people present during the three days, is still one of the best world contexts about electronic music, a showcase for important artists and professionals.

We hope there will be some improvements for Sonar 2009.