Notes On Media Activism In Cairo During The Post Revolution 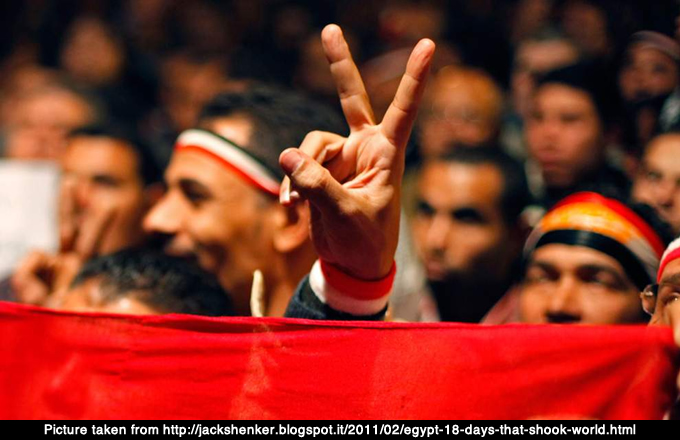 The political impact of new medias on the masses in relation to the Arab revolutions is still a mistery, as far as I’m concerned. To start with, it’s worth remembering that these are young populations for whom access to the net is not quite taken for granted yet, as it is in most part of the Western world, for both political (censorship) and techno-geographical reasons (huge desert areas, scarce and low-cost infrastructures). Yet, none of these factors seem to deter those peoples from using the Net. In fact, they seem to feed their curiosity anonymously satisfied through daily updated proxies and a phone word-of-mouth which, from towns and villages reach even the most remote places, and those less exposed to the infotelematic flow.

In the Egyptian case, for instance, just 20 million people out of a total of 80 millions have access to the Internet. These data should, nonetheless, be contextualized: it’s not just 25% of the total population being exposed to infomediatic disturbances, since that would underestimate the sort of in loco Internet fruition – often as a group, according to the clan system – or how informations spread from the Internet to both more affordable and user-friendlier providers as cell phones with Bluetooth®. 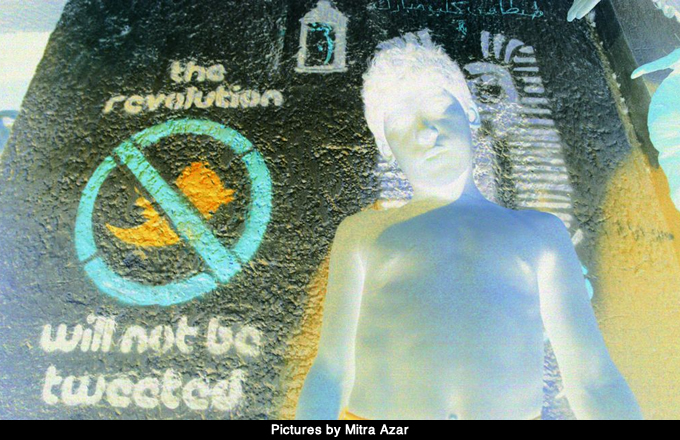 In order to describe how Internet activism works, we may imagine a circular path which generates, from an offline dilemma, an online campaign (upload) which, in turn, tries to pour into the real world (download), fraught with a stored-inbetween-code-lines potential.

One of the collectives I’m following in Cairo is called Kazaboon. Their working cycle starts with a Facebook page and a website, which is just an application form where users are required to notify what kind of event they want to organize, and what support they need. Kazaboon means lie. A Kazaboon event is an event that detects the lies about the current military regime. Illegal videoscreenings, concerts, graffiti, workshops. It’s a decentralized project: autonomous nuclei of people can decline an idea and independently realize it, possibly looking for the required logistic support – a spotlight and loudspeakers for en plein air screening, or the skills needed in order to unlawfully get a power connection from the lamp posts, and to finally spin the carousel.

One of the last Kazaboon project is the creation of an online interactive map designed as a counternarrative platform, open to anyone being aware of military officers whose intention is to install themselves in civilian positions. It is a kind of decentralized leaking platform which, nonetheless, verifies the informations accrued from citizens throughout a widespread network of Kazaboon independent nuclei, scattered on the territory. There’s also a Facebook page – No Military Officers in Civilian Position. Nadine – one of the collectiv’s founders – explains that the goal is to deconstruct the current ruling military structure. After showing the army’s violence and lies against the civil population, Kazaboon now aims to reveal how power processes are not just repressive, but active-creative as well. 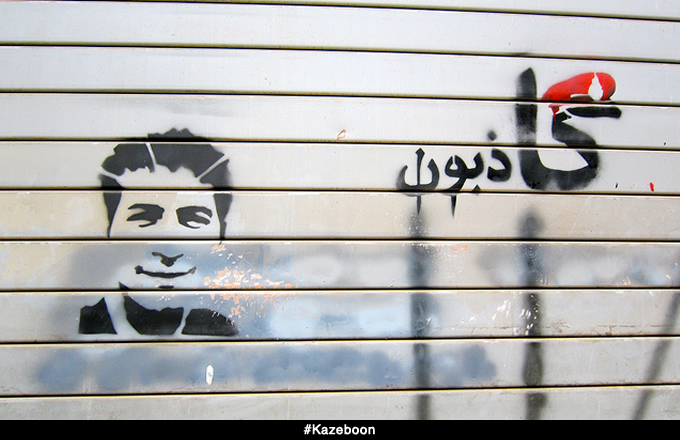 In relation to offline effectiveness of online campaigns, we should not undervalue, in this sense, a phenomenon called cyber-clanism (as defined by my Lebanese friend Wissam Bashir), which refers to a trend according to which my Twitter followers actually follow me because they think like me, without sparking a dialogue with a counterpart who is also starting to actively, not just repressively, use the Internet. Think, for instance, of the Facebook page of the Supreme Council of the Armed Forces (SCAF) ruling in Egypt at the moment, readily attacked by the No Military Trials collective, who launched an appeal to its users asking them to subscribe SCAF’s page in order to write “No Military Trials” on it, in reference to the military trials against which the above collective has been fighting for months.

Furthermore, from an online geopolitical point of view, we have to consider how much some lyfestyles and behaviors typical of Western culture are currently accessible 24/7, even in those places where the American-way-of-life is not exactly looked kindly upon. As early as the start of the so-called Iranian Green Revolution in 2009, the ruling regimes say that revolutionary events are somehow controlled by the West. There’s maybe some truth in this statement. If the Internet is the tool through which a certain middle-eastern culture looks for spaces of self-assertion, yet it’s true that the Net is still the place through which a certain Western popular culture virally filtrates.

What can we say about the video of an Iranian girl dancing to the rhythm of Persian techno-pop music in front of her webcam, probably imitating an American same-age peer, and yet, maybe, perceiving her own manifestation as a kind of temporary TAZ in which she can state her rejection of the constraints by the ruling regime? Is an expressive form which we may define as underground – in the sense of a minority push for change – really channelled by the predominant culture from another country? When do girls’ dances in front of their webcams become a basic need for appropriation of a public – albeit virtual – space, thus immediately assuming a political value? 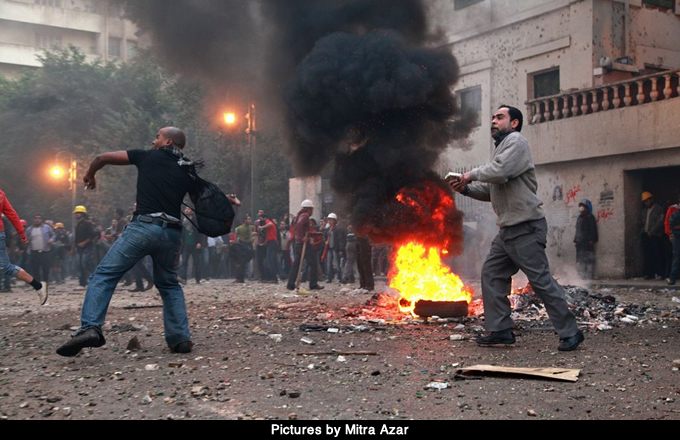 Is there perhaps the same (unaware) desire for politics and representation in a similar performance by an American girl, child of Western democracy? What pushed Aliaa Magda Elmahdy, an Egyptian teenager, to publish her naked pictures in her blog, A rebel’s diary? And why was Samira Ibrahim, an Egyptian activist, subjected to a virginity test, after her arrest? Airport body scanners spring to my mind.

The influence of the Western world on the making of Arab revolutionary public opinion is therefore not to undervalued, in this sense. If we look at the activists’ profiles on the Internet, many among them have a mixed cultural background. In January, at the place of one of the best-known collectives in the Egyptian post-revolutionary digital landscape, I took part in a workshop by a former English soldier on how to behave during clashes between security forces and civilians. It was directed to citizen journalists of any age, race, gender, cell phone.

The diffusion of new media and the integration-hybridization between them and traditional media is certainly playing an important role in the shaping of new middle-eastern sociopolitical scenarios. From this point of view, I think that the theme of intra-/intermediality is one of the most interesting one, especially if we consider the relationship between mass media and one-to-one media. If, on the one hand, citizen journalism creates problems in terms of abuse of the cognitariat, on the other, citizens’ direct participation in the creation of information turns the passive perception of TV into a slingshot ready to fire at the viewers’ comments and to real-time information shared on the Internet by users’ interaction. 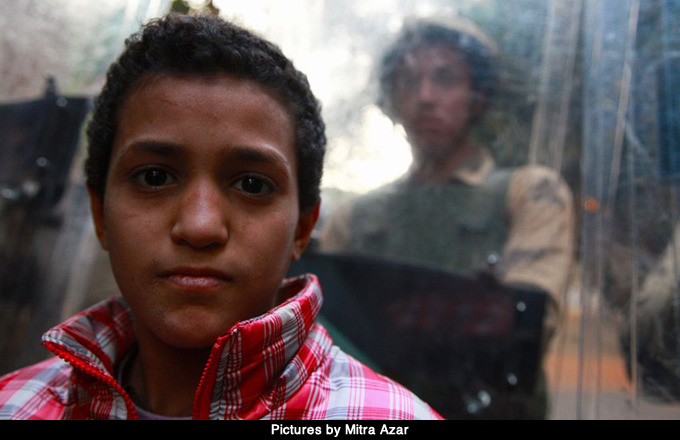 An unanswered question is therefore what are the ways through which mass media inevitably filter the information galore available on the Internet? Besides, we should not undervalue the fact that citizen journalists are organizing themselves through independent networks and websites, irrespective of traditional media’s functioning, or, more precisely, in their directed alternative and competition – in the perspective of the cancellation of the separation between TV an the Internet, and in the civil perspective of new form of active citizenship, of which the silly definition citizen journalism (linguistic indicator of a downgrading of a new form of civic sense to a mere more or less amateur job profile) doesn’t seem to consider.

In this direction, the 18 Days In Egypt collective is to me an exemplary case. 18 days is a platform for documentary crowd-sourcing. This is how it works: my friends and I decide to take part in a public event. Armed with cameras, smartphones, Internet connection, everybody has a task to do: one takes pictures, another shoots videos, a third twits, another one posts. Once at home, each one of us will freely edit the stream of images and language generated by the collective narrative of the event in which my friends and I have just taken part. All the participants to that event can potentially take part in the narrative.

I’ve got the impression that the basic need underlying this project is translatable in the attempt of an evolving-tidy-up in the senseless flow of images and words circulating on the Internet. Someone is likely starting to feel the need for tidying up the bottomless reservoir of digital-semantic glossolalia generated by exponential uploadings: opening and closening files, storing, localizing, temporalizing, counternarrating, connecting the dots of the digital puzzle, and counterinformating. 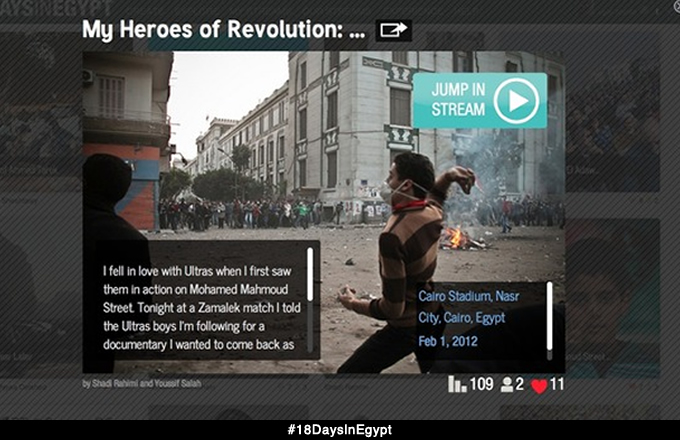 Let’s not forget, in this context, that the mass media mythologem claims the Egyptian revolt started from a Facebook post. I’ve recently heard about it from the Egyptian activist Alaa Abd El-Fattah, while he was talking it over via Skype with Julian Assange. Alaa believes that Western mass media have overdone new media’s central roles in the Arab revolts in order to immunize their revolutionary message, while pushing through a basically domesticating and comforting counterrevolutionary narrative: the Egyptian revolutionary looks like Britney Spears’ son. Nonetheless, this does not explain why, a year after the revolution, 49% of Egyptians vote for the Muslim Brotherhood, while 25% vote for the Selaphists.

By the end of the call, talking of this and that, Alaa reminds Julian how counterproductive closing down both the Internet and phone lines has been for the regime during the 18 days of the Egyptian revolution, since it was exactly thanks to the inability to access information via the media – from computers to cell phones, to home phones – that a large slice of the population poured out into the streets, relying on old social networks – neighborhood tea-rooms, mosques, churches, squares. One of the graffiti I saw on the walls of Cairo springs to my mind: Twitter’s blue bird behind a backslashed circle, as in a no symbol: “The revolution will not be twitted.” Almost an appeal for a physical presence on the field, a statement of distrust and powerlessness towards one of the most popular tools of the so-called Arab Spring. It made me think of Gil Scott-Eron and his The revoution will not be televised.