Eloquent Pixels. Interview with Games for the Many

In May 2017, the UK was going through a divisive political stage; the Tory PM Theresa May indicted elections in order to gain more power to use at the table of discussion regarding Brexit. Harsh political propaganda was spread by both Tories and Labour members, wich messages developed to attack each other and propose projects that could appeal the electorate.

In the midst of this turmoil, nine Labour-supporting game designers, developers, activists, musicians released CorbynRun under the name of Games for the Many. It’s a platform game that let the players play the role of the Leader of the Labour Party and win the elections by gaining supporters and defeating political opponents. The game has been a hit and the team didn’t stop to promote political agenda by developing new projects.

I took the opportunity to interview James Moulding (Co-Founder, Producer), Rosa Carbo-Mascarell (Co-Founder, Designer) and Tim Phillips (Designer) about what it means to design political games and how game design can shape such a message. 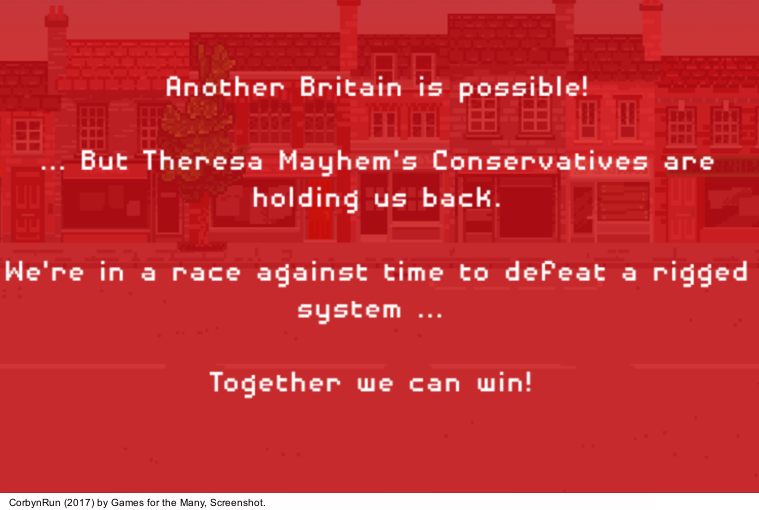 Filippo Lorenzin: Who do you try to appeal to your projects? In the last few months, figures have revealed that there is a renovated interest in politics among teenagers and people in their 20s, but I have the feeling your platform is not meant to engage only this demographic group… What do you think?

James Moulding: Whilst CorbynRun was specifically produced during the 2017 General Election with the aim of targeting 18 – 25 yr olds, the largest demographic with over 44% of our players were in the 25-34 yr range. Games for the Many is likely to continue placing a special emphasis on this 18-34 range given these are the most digitally adept and therefore the most likely to take to playing a game. Young people are also more politically apathetic, fewer of them turn out to vote than in older generations. Young people often feel politics doesn’t speak to them and doesn’t understand them. We’re attempting to change that. This may vary on a game by game basis.

Filippo Lorenzin: Is there any project of the past that inspired your platform and strategy?

James Moulding: There are various strands of thought that make up Games for the Many. Prior to the game jam that started the whole project back in April, I had been working on analyses of the French presidential election and Jean Luc Melenchon in particular. Melenchon’s campaign created an excellent game, Fiscal Kombat (sadly offline now), about the candidate tackling tax dodgers, IMF leaders, and his rightwing opponents. The game demonstrated in a funny and accessible way how Melenchon was to raise funds enough to finance his programme of public works and reform. This, in turn, informed the design and spirit of CorbynRun.

Games for the Many is influenced in large part by the thinking of sister project Class Wargames, run by Richard Barbrook, Fabian Tompsett, and James Moulding. Class Wargames is a situationist ludic-science group who play games in order to discern political meaning and inform political strategy. Games for the Many’s co-founders James Moulding and Rosa Carbo-Mascarell also both have a familiarity with situationist and psychogeographic discourse albeit from different wings of situationist thinking – James from the political side, Rosa approaching from the literary side. These influences will likely find an expression through our games and future concepts. 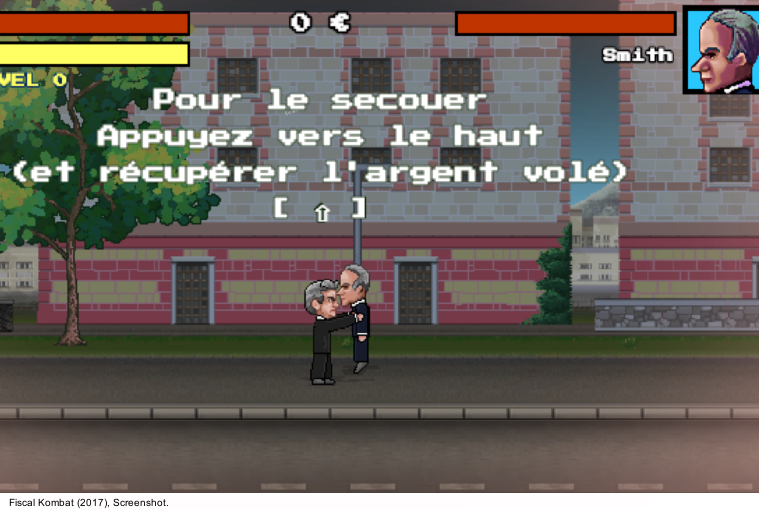 Rosa Carbo-Mascarell: I’ve been a fan of Paolo Pedercini’s games. He focuses on current topics and creates small games that question and analyze the current state of affairs. We took on this spirit of making short and accessible games when we first outlined what sort of game CorbynRun should be. Another influence was Ian Bogost’s book, “Persuasive Games” (2007). While he focuses mainly on simulations, his work on rhetorics is reflective in how we went about the language of CorbynRun. 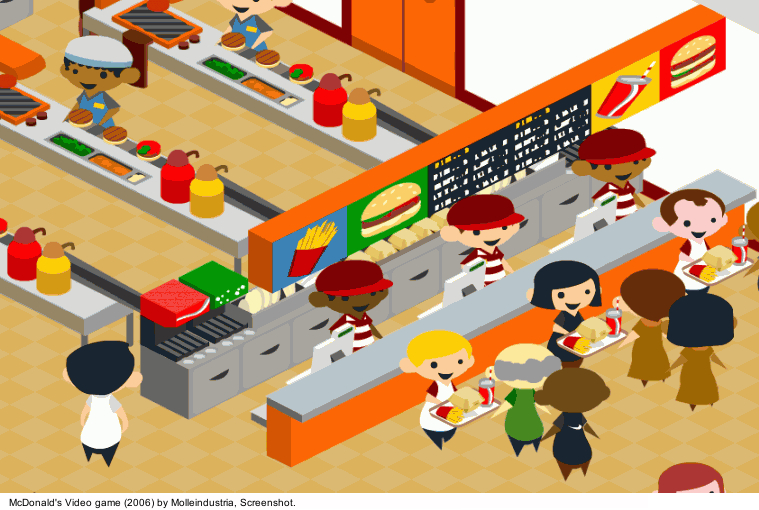 Filippo Lorenzin: Corbyn Run has been a huge hit. The mood of the game is eccentric and funny, with bosses like Boris Johnson coming down from the sky. Impersonating Jeremy Corbyn, you can’t actually attack anyone. Could you tell more about this game design decision?

James Moulding: We were heavily constrained by the political circumstances around the election which impacted heavily on the design. We made the game in one month from the first storyboarding to final playtesting. However, the design at the start of this process was miles from what we ended up with. The first few weeks of the election were very different in tone to the remainder, in that many Labour activists were downbeat about our chances.

The initial game design focused on the Tory battlebus scandal, it focused on chasing a group of scandal-complicit Tory MPs into prison and was named Grand Theft Tory. By the 10th May, the Crown Prosecution Service announced they had ceased investigation into all but one of the implicated MPs. This forced us to ditch our work up to that point and start again on what then became CorbynRun. 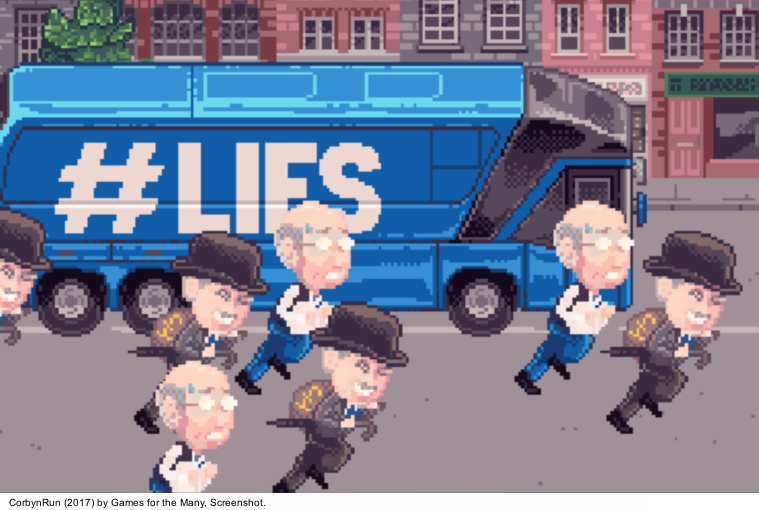 If we’ve learned anything from this experience it’s that these games have to be accessible, witty and funny. The reality of the bosses design decision was that we simply didn’t have enough time in the short production period to improve on that design. Regarding Jeremy’s lack of aggression, we didn’t really feel that Jeremy attacking Tory MPs in the same way Melenchon in Fiscal Kombat attacks his opponents truly reflected his beliefs. We made sure that JC was just knocking them out of the way.

Filippo Lorenzin: Usually, video games reward gamers who are the best at beating opponents or enemies; do you think these basic game mechanics may be used to convey a positive message?

Tim Phillips: I think that a lot depends on how those mechanics are presented, the system itself is really only half the equation. Any mechanics can be re-skinned to convey a variety of messages. Typical RPG combat, for example, could be reskinned as conversation or debate fairly easily without changing the way the mechanics function; whether that game would be marketable is another question.

I would also say that, while power fantasies have been the dominant experiences produced from the AAA sphere for the majority of video games history; with the current explosion of indie, mobile, and web games, there has never been a better time to explore the frontiers of game design with bold and new ideas. 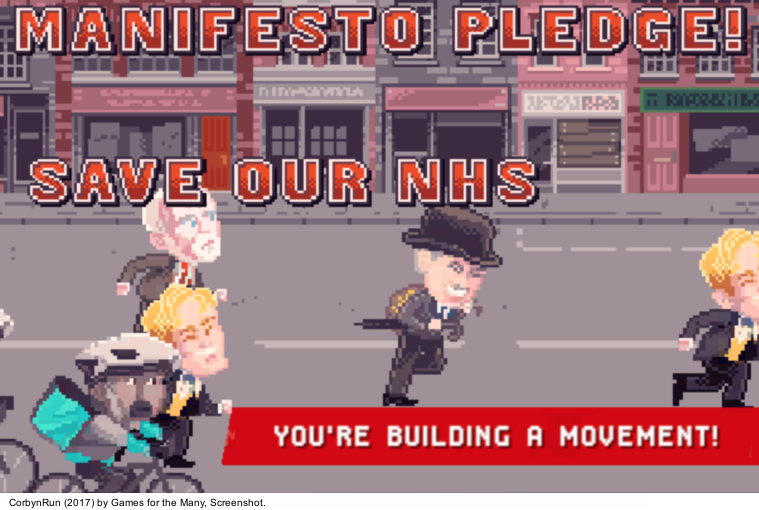 Filippo Lorenzin: Game design often relies on well-established mechanics and tropes – records, points, rankings are systems to classify the ability of a gamer. What does happen when you’re supposed to make a game with a political purpose? Do you exploit the same mechanics or invent new ways to engage gamers?

Rosa Carbo-Mascarell: We are trying to answer that question now. During the design of CorbynRun we went for a familiar mechanic since this is more conducive to virality. However, as a game designer, I’m interested in finding ways to inspire political thought through play. The problem is politics moves quite fast. We are running game jams to help us explore the possibilities and learn how to design quality new games quickly.

Filippo Lorenzin: Political propaganda has been produced for years through video games. US Army’s America’s Army series (2005-), Chinese  People’s Liberation Army’s Glorious Mission (2011) and Hezbollah’s Special Force (2003) are examples of games produced by governments with their own specific political goals. What is the difference between these and your games? 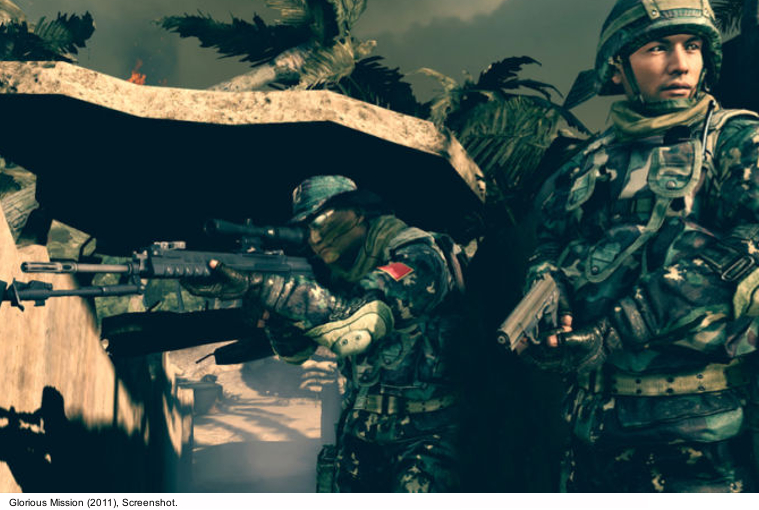 Tim Phillips: We tend to focus on the informative content of our games; with CorbynRun that was Labour’s manifesto pledges. You could see the other elements of the game, the arcade style gameplay, the caricatured sprite art, as a vehicle to promote those points. What might set CorbynRun apart from the other games mentioned is that those manifesto pledges were real, not simply rhetoric. To my mind, that makes CorbynRun closer to a party political leaflet than pure propaganda.

Filippo Lorenzin: When does a video game stops to be a game and becomes a mere political message? Of course, political messages can’t be spread without relying on a media, but I wonder what makes your games political. 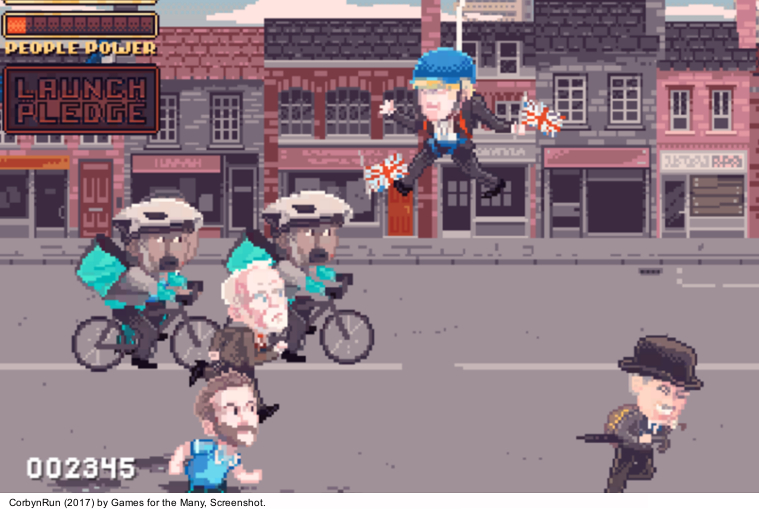 Tim Phillips: In my opinion, a game would stop being a game only when it lacked the formal elements of one; even the simplest game could become political if it was interpreted as such. In that way, what ‘makes’ our games political is everything that sits on top of the mechanics themselves, the metaphor, the presentation, the conversations surrounding them, and the way they are collectively interpreted.