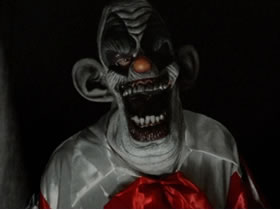 You need a little bit of sense of humour to face horror. This seems to be the moral lesson of the tales of ordinary craziness by two video-artists whose technique and thematic are very different.

The New York-based German artist loves to involve a range of non-artists in the creative development of his works. His exhibition, called Us and Them presents a series of dreamlike situations focused on horror as a state of mind and a cinematographic genre.

Angels of Revenge (2006) is a new video for which Jankowski asked contestants from a costume contest at a horror film conference to recount acts of betrayal and tell stories of imagined retribution. The video goes with a series of photographs showing the protagonists and their revenge letters.

Lycan Theorized (2006) evolved out of a real horror film. He intervened into the script  which contains all the werewolves movies clichés  with quoted observations on the philosophy and nature of horror generated from conversations with high-profile academics and cultural historians working in the field. The black and white 16mm silent film titled Playing Frankenstein features Jankowski challenging a Frankenstein impersonator to a game of chess mixing again fiction, extracts and reality.

The more intimate Finnish artist Ahtila is well-known for her desperate household female descriptions. MoMA’s presentation of The Wind is the first exhibition of Ahtila’s media work in a New York museum. Her three-screen, fourteen-minute installation offers simultaneous perspectives of a single breakdown: a confused and angry young woman invites, in a sense, a strong wind to scatter everything in her apartment to free herself from phobias and obsessions.

This installation also appears as a single-screen episode in her feature-length film Love is a Treasure (2002): 5 women tell about their fantasies and neurosis mixing happiness and bitterness through real and mental landscapes.

These two exhibitions gently investigate on common feelings and troubles we often hide behind a mask or in our unconscious, but ready to unexpectedly kick up.