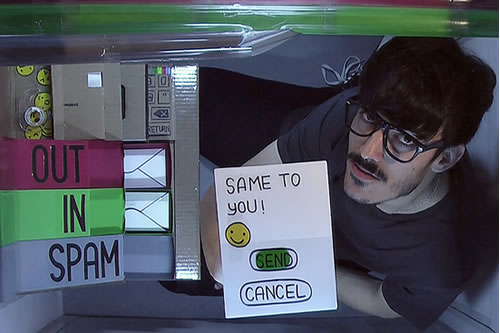 “In the last years technology has advanced in giant steps”…this is not a new thing but today it seems to be a reality for everybody. Open source is now an open door that will come into all houses, exponentially speeding up creativity and development possibilities.

Next, a short introduction that will analyse the key moments in the last ten years of technology and creative development in the field of interaction and new media, and end with the performance and interview of one of the most interesting artistic collectives in the last few years: Multitouch Barcelona.

The web has always proposed dynamics connected to interaction (Action/Reaction) used everyday by all the net users. Flash in the ’90s has given colors to this panorama, giving to all interested (including me) the possibility to create funny experiments with animation, colors and graphics.Nakamura, Amit Pitaru, Naztke, and Jushua Davis, only to name a few, have recently proposed experimentation born under the flash movement and its creative possibilities

On the other side of this scene, in 2000, I remember having gone to the Offf Festival in Barcelona to the presentation of the installation of Golan Levin and collaborator. This installation was opening up new possibilities in the coding, interaction and MIDI, including all its infinite applications. In 2001, when processing was founded by Ben Fry and Casey Reas, and later the turn of Reactable, a project created and launched by Interactive Sonic Systems Team directed by Sergi Jordà (Università Pompeu Fabra, Barcellona): a electronic music instrument was presented for the first time in 2005 at the International Computer Music Conference Barcelona, to be used later at the Coachella Festival 2007 in California by Bjork, and presented subsequently in diverse events across Europe.

From here we started to develop a project connected to Multitouch technology as a natural touch screen evolution (the first one is sensitive to touch at the same time in different point of the screen) and in this year 2009, after nine years from Offf ’00 Barcelona, the neo format MultiTouch was presented at The Offf Oeiras ’09, in front of 4000 people. The interactive installation Space Invaders XL, exhibited at one of the main festival rooms, consists of one video screen of 6 X 4 meters and allows all to play the well known video game Space invaders. Hundreds of balls were launched from public to “a sensible screen” to hit the target and eliminate it. It was a moment of collective euphoria!

Interaction is a kind of action that occurs as two or more objects have an effect upon one another. The idea of a two-way effect is essential in the concept of interaction. (Wikipedia)

…When we add to this simple principle, the passion for the code, creativity and the natural human aspects for fun-born Multitouch Barcelona. The collective born just one year ago was able to quickly enhance his international recognition thanks to his experimental, fresh and funny video installations.

Multitouch was founded by four young designers, based in (X), who work across interaction and New Media, and develop platforms linked to entertainment, play and experiment, by constantly exploring the communication between people and technology.

Contrary to many different projects made in this last period in this field, MultiTouch was able to show, in his artistic projects, the human aspects, and opened up another interesting option in the education and entertainment fields. Next is an interview of Xavier Vilar de Paz, one of the four collective founders that will tell us in a better way how MultiTouch was born and how their artistic projects are developed, by going through a selection of his more representative interactive installation analysed by the eyes of the author to achieve and locate the concept of art and design in this right historical moment.

Marvin Milanese: Hi Xavier, tell me a little about how was MultiTouch Barcelona born and what are his principles.

Xavier Vilar de Paz: Hi, Marvin. Multitouch Barcelona is a group-of-four-project born a year and a half ago. Within a context where a lot of new interactive paradigms where appearing we focused in multitouch technologies, hence our name. We wanted to see how it feel to manipulate this kind of interfaces and so, we decided to build our own prototype.

Soon, we realized the power such interfaces -not only multitouch interfaces, but all the new ones that were appearing- have to connect with people. They involve senses in a whole new way and people feel more comfortable using them. Thus, a new way to communicate people and technology was appearing and we felt like contributing with our project. We saw the opportunity to make technology warmer and more close to people. This was the aim of our early works: to create or use technology to trigger emotions on people.

Later on, we discovered that even though this interfaces were an improvement in emotive technology they would never -or at least for now- beat human interaction complexity and richness. So we redefined our goal, we wanted our work to serve as an excuse for human encounters to occur. Really shiffting attention from our work to what people feels in the environment it generates, we clearly aim for the experience, which is personal, unpredictable and unique. I believe that to be, currently, the main principle of our work.

Marvin Milanese: What is your connection with Barcellona?

Xavier Vilar de Paz: We live in Barcelona and we enjoy it a lot here. However, something tells me that you are refering to our original name, we could have make it better with it, we know, but we did not expect the project to evolve as it has and so we went for a practical descriptive name: what you do + where you do it. As it turn out, we are no longer doing multitouch -or not only-, who knows if we will be moving someday too. Anyway, we will always have a part of Barcelona in our insides, and this is reflected in our projects. So it makes sense to us.

Marvin Milanese: What kind of technical support do you use in your installation, and exactly, what is your relation with technology?

Xavier Vilar de Paz: We all have a little background on computer science and we love design and interaction. That is nice because it has allowed us to work without any technical support. Everything in our projects we made it in our own from hardware -not the computers itself, everything but-, software, design, grahpics and so on; we even designed and programmed our website and recorded and edited our videos. We work this way because the main intention we had when we started with the project was to learn, and that stucked. As any way to work, it has advantages and drawbacks but we are happy with it. The main advantage -a part of learing with every new project- is that we can integrate everything perfectly since we have control of all the layers of the project. The main drawback, we work slower with new technologies we do not know. All in all, for us, the results pay off!

Marvin Milanese: Your Demo-Reel “Guten Touch”, transfers a lot of emotion, the belief and the passion for your work. Interactive installations are often cold. Now, it’ s nice to see how it is possible to combine the cold technology aspects with the human contact, the game, the entertainment…your slogan “ready to play” doesn’t leave any doubt…What can you tell us about this?

Xavier Vilar de Paz: As we said, there were a lot of new interaction paradigms coming out at the time we started and we saw their potential to warm up technology. By involving the whole human body and senses into the interaction process we believed that technology could become closer to its users. It is all about making technology warmer. When a user sweats in front of your installation, while playing around, you realize that he/she is not perceiving it as technology but as fun. We want our projects to benefit from that kind of interaction.

Marvin Milanese: Tell us a little about your installations…how and from where did you start? Which was your first project or experiment as a team?

Xavier Vilar de Paz: We started building a tabletop multi-touch interface prototype. We wanted to experiment with it and building it allowed us to develop several simple applications and start messing around. We learned a lot out of this period and we applied this knowledge in the conceptualization of our first serious intallation: the Guten Touch Installation.

Marvin Milanese: One of your last installation “HI – a real Human interface” has demonstrated a major importance of human aspect in your work. Tell us two words that can used to describe it…

Xavier Vilar de Paz: Well, “HI” is not an installation really, HI was intended to be a concept project that somehow descrived vaguely our phylosophy. At one point we realized that people no longer understood what we did. We believe our misleading name to be the blame for that. However, we wanted to find a way in which to reflect our project essence leaving room for interpretation. HI contents our point of view on how interaction design should be and how we like to approach it. At the same time we wanted it to be though provoking with the possibilities that technology is providing. The most incredible and useful output we got with HI were the comments people make of the video. They help us to define ourselves, then we knew it was a succesful project. Since HI is a descriptive project, it is not closed, so HI fans should wait for new releases… there will definitely be

Marvin Milanese: Have you ever thought of involving children and old people in your project? It could be the principle of new educational aspects…

Xavier Vilar de Paz: Defenetly! Children are wild, creative and playful; an actitude that we all should try to maintain as we grow old. This actitude turn them into incredibly interesting testers -since they challange the rules all the time- and a great source of inspiration. It would be a great to develop a project specially devoted to them, sure we will enjoy! In the other hand, developing for old people will also be interesting. They tend to be unfamiliar with technology and usually affraid of it. Making technology closer to them would be a great challange and would test our skills in warming up technology.

Marvin Milanese: Which are your dreams in short, medium and long term?

Xavier Vilar de Paz: We love what we are doing… so I guess that the answer to all the questions is to be able to keep doing what we do. Part of our philosophy is enjoy while doing, we’ll try to keep it up!

Marvin Milanese: In the last years we have seen an exponential growth of new communication media. Thanks to the democratic power of the net, every day a new blog, radio and streaming TV are born and seems to arrive to a bigger collective consciousness. Where are we heading to and what function does art, design and technology play in this historical moment?

Xavier Vilar de Paz: We think is a great historical moment for creativity. The ability to share and the creation of exchange places have triggered the most important thought revolutions in human history. Internet has become the place to share work, knowledge and exchange it with other people and influences. It has become a place where hierarchies blur. No matter who you are, just what you do. For us this has been crucial for our project to exist.

Marvin: What do you want to tell to the world?

Xavier Vilar de Paz: Always think that computers are wrong, not you!