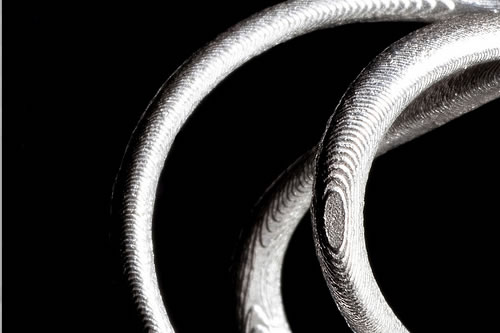 3D printers are machines which allow us to “print” a physical object starting from a digital model. The name “3D printer” is explicit enough to let us imagine what it is about, but also unknown enough to allow our imagination to travel towards sci-fi-like scenarios.

There are several technologies of this kind, which usually are grouped under the name “numeric-controlled machines” or “digital fabricators”; numeric-controlled mills and lathes, for example, use a tip (similar to a drill) which carves a block of material and outlines the shape of the desired object; other machines instead use heads or lasers able to fuse, sinter or stick dusts of various materials (ceramics, metals, plastic). The “numeric-control” definition means that these machines are controlled by a software which takes care of “translating” the 3D model created by the designer, into commands.

Initially these technologies were used for quickly prototyping, but today, also thanks to the costs lowering, they are even used for production. It is in fact possible to purchase a 3D professional printer for less than 10,000.00 Euros, and low-cost printers – for less than 500.00 Euros – were also produced; these remain too inaccurate for industrial production, but they risk to become economically revolutionary.

Imagine you could freely download the 3D project of an object (or to draw it yourself), and to own a machine which can print it, what would you need the hardware store for? You could print bolts, handles, even plastic shoes at derisive costs, and then you could melt the object once you don’t need it anymore, and recycle its material for other objects. Anyway, beside the futuristic scenarios, the diffusion of these machines has already brought forward a revolution called mass customization.

When a design becomes original, it means it can be spread through the net, so it can be shared, downloaded, modified. This is true not only for music and digital arts, but also for 3D projects to be used with digital fabricators. These objects – or to be precise their printable 3D projects – become digital thus can be shared, downloaded, modified.

The diffusion of 3D printers, apart from giving life to debates about copyrights, allows for the return of an old practice very common in the handicraft world while nowadays it it only used for luxury goods: personalization. Before the industrial revolution, anyone could personalize an object simply by communicating their preferences to the craftsman who would create it. Today, this is not possible anymore, apart from isolated cases, and the new diffusion of numeric-controlled machines.

What is the 3D printers revolution? If we have a digital design, it means it is possible to program softwares that allow the customer to manipulate the data that describe that object, thus modifying it. The next step is to project these softwares so they can be hosted on a website so they are accessible to many. Anyone can connect to the Internet and customize the desired object, if the Company allows it.

There are many Companies which are moving in this direction, but only few of them offer a full personalization. You can choose the color of a t-shirt or decide to engrave your name on a watch, you can ask a tailor to modify an item of clothing following your taste, or choose the accessories of your new car. We can personalize an object more or less and in the most different ways, but the choices we make will influence not only the economical value of the object (i.e. the case of the car’s accessories) but also its emotional value.

The website NikeID (www.nikeid.nike.com) allows customers to change the colors of a shoe, to choose the materials and even a text to be embroidered on it. The website Freitag (http://www.freitag.ch) allows users to choose the piece of cloth, and the model of bag which will be created with that cloth. The emotional value these objects gain is in the customization itself, in being able to say “I chose the colors” or “look, my name is on this shoe!”.

This kind of experimentation is interesting, but do not make the most of the potential of mass customization. Fluid Forms, a group of designers based in Graz, Austria, further developed this concept thus giving life to many interesting projects.

Earth bowl pinstripe is, for example, a fruit basket, but also the 3D topographic prospect of a place. Through Google Maps, the online software created by Fluid Forms selects a geographical area, which will then be turned into the fruit basket. This way, it was possible to trap into a piece of wood the aerial view of a city, or any other place on planet Earth.

Moebius Ring is a ring created following a data processing algorithm. QR Buckle is a belt whose buckle is engraved with a 2D bar-code where a certain number of  characters is codified – i.e. a URL. QR codes are very popular in Japan: it’s enough to install a dedicated software to allow your cell-phone, once you’ve taken a picture of the code, to decode it and eventually to connect to the obtained URL.

These are just some of the projects of the Austrian studio. The resulting objects are elegant and finely crafted, besides being great examples of computational design, that is projects which are shaped following algorithms. It is programming that allows the creation of a specific shape. Fluid Forms is in fact also a group of creative coders, or creative programmers: Once they choose the object they want to create, they program an application that allows them to manipulate its shape by assigning values to variables. These variables can be geographic coordinates, dates, code sequences or many more depending of the algorithm describing the 3D shape of the object.

The costumer becomes thus a co-creator, is able to take part to the creation process of the object by defining the shape it will have; he doesn’t only participates by choosing color or other details. The emotional value these objects acquire is very high: through online softwares it is possible to trap inside the object personal information, like a beloved place, an important date or your website.

What Fluid Forms projects is not only an object, but a family of objects, a series of possible solutions. The design is not pre-defined, it instead constituted by various realizations, a set vast enough to offer many different possibilities, but small enough to not diversify these possibilities too much. We are not talking about design anymore, we are talking about design-space.

The work of a designer nowadays, is not to find a sole interesting shape but a family of shapes, not to define solid and static forms but fluid forms which can change following the desire of the customer while keeping their own characteristics and their functional and aesthetic value. I discussed about this and much more with Hannes Walter, CEO of Fluid Forms.


Elena Gianni: Could you introduce us to Fluid Forms and its basic concepts?

Elena Gianni: Big companies as Nike are coming out with therir wbsite for customization. But the customizations that you offer are different: I think you exploit the emotional value that can be embedded in the experience of customization in a way that those companies do not (I refer especially to earthbowl project). If you think I’m right, how you would describe those different types of customization? In which ways yours could be different (and better)?

Hannes Walter: There are two types of customization. 1st. Functional personalisation like medical implants, custom cut cloth, and 2nd emotionals customization like for instance Fluid Forms or Freitag F-Cut bags. We enable our customers to integrate their emotions and feelings into unique products. By involving customers in the design process we can create products that are emotionally engaging conversation starters and a source of pride.

Elena Gianni: I would define your design as conceptual. You emphasis on concept more then on function or on shape(s).What is the process underlying the realization of projects like the “QR buckle”?

Hannes Walter: Fluid forms are used as a statement, because the persons personality is always a part of the product. Fluid forms are not mass-market products, they are something special that combine aspects of our society, human nature and personal experience. Digital production is important, because that enables us to produce unique pieces for the reasonable price. Our whole world is becoming digital and in the case of QR we reference this fact. The initial idea was that once QR Codes reach the main-stream as they have in Japan we will be able to leave our business cards at home and wear our twitter of facebook QR belt or brooch. Some customers have used it to hide puns or references to their personality. Since the QR Code technology is still new to the western world there is a level of early adopter aura to them.

Elena Gianni: Bruce Sterling define generative art and design projects as Kaleidoscopes: they offer a variety of different visual outputs. When you design an object you define a space of solutions that has to be wide enough as well as little enough. The problem is that you should create a family of objects with similar aesthetic but interesting differences: your Kaleidoscope.  How do you define the boundaries of this “design space”?

Hannes Walter: Emotional with as much personal input as possible; the developer or designer defines the aesthetic freedom for the customer or co-creator; we call the kaleidoscope meta-design; on the technical side it ensures that every product is producible and functional.

Elena Gianni: Mass customization, 3D printing diffusion and the rising of DIY culture should spread “design Piracy”. A lot of designs should become open-source (as they can be shared for example as CAD files) and self-produced with desktop-fabricators. Should the industrial design business be affected in the way p2p music sharing affected music industry? How designers could face the problem?

Hannes Walter: The real interesting thing that comes with the new possibilities is the remix culture. We like this culture very much, because it will bring much more variety in our lives. But at the moment just a small minority are able to work with 3D-programs. You can see our Design-Tools as very simplified 3D-CAD-programs for anyone. Many people can use Word and many designers can use photoshop, but the program does not make the good design. It’s the designer – in our case the creative coder who’s defining the meta-design or design kaleidoscope. We aren’t afraid of design Piracy at all, because good design will always have it’s place and the really interesting things are a combination of technology and craftsmanship. As soon as a product can be printed on your 3d printer at home its day is probably already done; onto the next idea. The first products to be produced by home 3d printers from pirated STL files will replace cheep utilitarian products not objects of desire.