The digital violence of cyber-weapons in the exhibition “Terror Contagion” 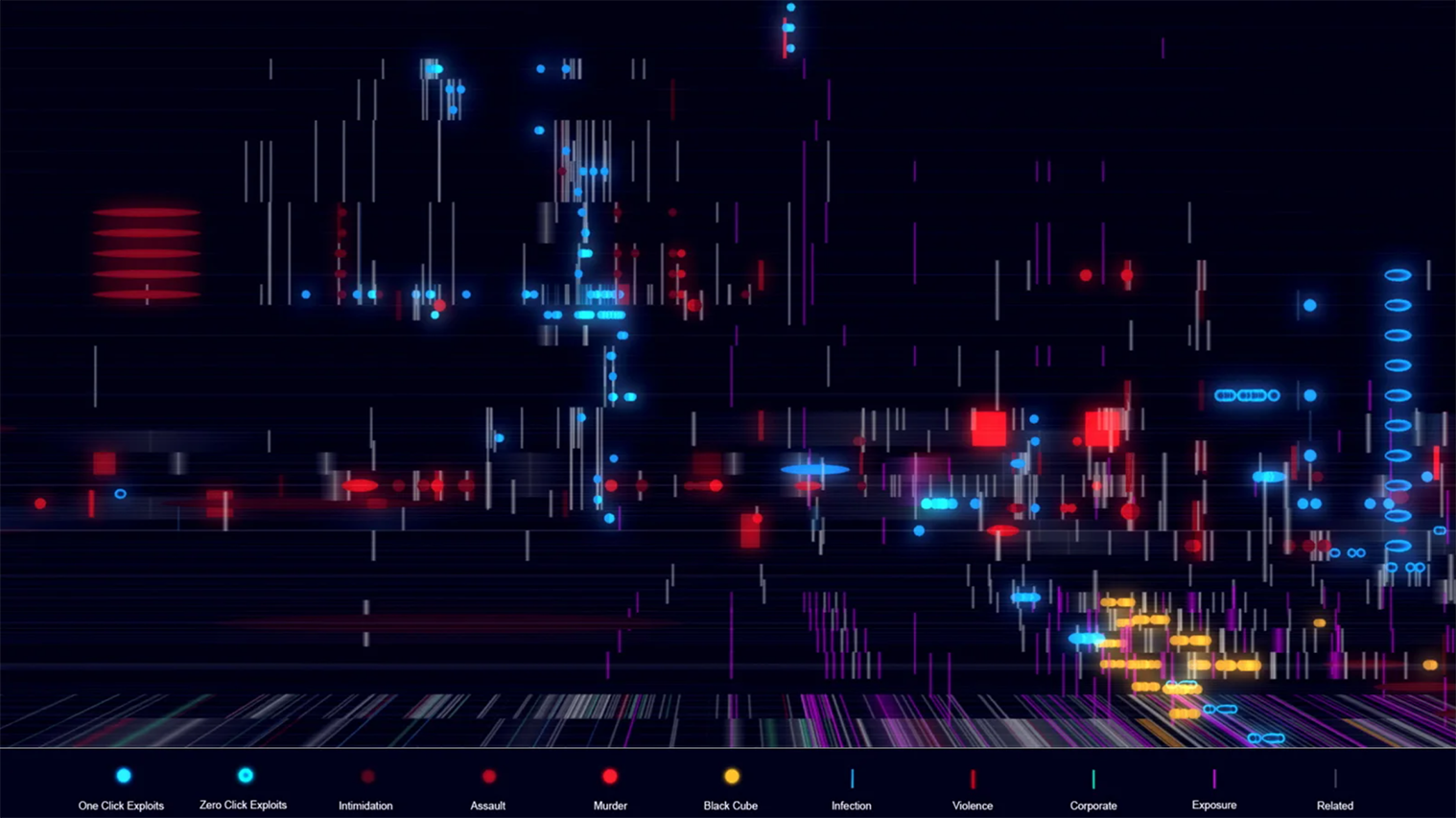 The Musée d’art contemporain de Montréal (MAC) launches Terror Contagion, by Forensic Architecture with Laura Poitras, an immersive installation that pulls visitors into a graphic, three-dimensional representation of the sprawling connections, patterns and consequences of acts of digital violence documented through the investigations of the research agency Forensic Architecture. The exhibition, co-produced by the MAC, is based on a project undertaken with the support of the Toronto-based Citizen Lab and Amnesty international. The exhibition is presented at Place Ville Marie—the MAC’s newly minted, temporary location in the heart of Montreal’s business district during the architectural transformation of the institution’s headquarters—until April 18th, 2022.

In Terror Contagion, Forensic Architecture used the condition of global lockdown to turn its gaze to the digital violence of cyber-weapons. Contagion is the operative metaphor for this ongoing investigation of cyber-weapons manufacturer NSO Group, and the much-discussed abuses enabled by its malware Pegasus, sold to governments across the world. A powerful cyberespionage tool, Pegasus can enable its operators to infiltrate phones, access personal and location data and surreptitiously control a device’s microphone and camera.

The investigation, Digital Violence: How the NSO Group Enables State Terror, led by Forensic Architecture founder and Professor at Goldsmiths, University of London, Eyal Weizman and researcher-in-charge Shourideh C. Molavi in collaboration with Amnesty International and The Citizen Lab, examined dozens of targets of state surveillance — fellow investigators, journalists, opposition figures and activists, including the group’s friends — to map the terrain of a new digital battlefield in which the state wages war against its own people. The 2021 Pegasus Project revelations rattled the world as a list containing thousands of potential “infections” of high-profile individuals was leaked. 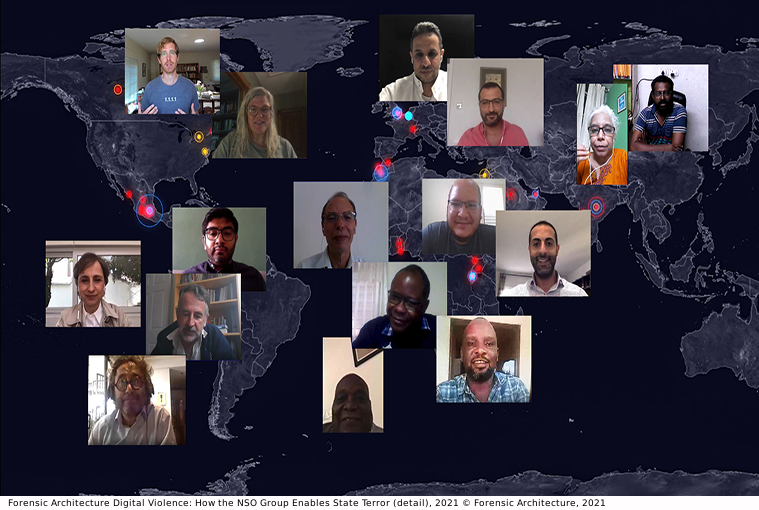 Hundreds of Pegasus infections and the corresponding physical violence are mapped in the installation presented at the MAC. We are brought into the workings of an ever-expanding digital platform visualizing almost two thousand data points documenting digital infections and physical attacks, as well as other related incidents. A sense of pervasive menace is heightened by an accompanying data sonification, a collaboration with renowned musician and producer Brian Eno.

Collectively titled “The Pegasus Stories,” the video testimonials are narrated by renowned whistleblower Edward Snowden and give voice to activists who have been targeted with Pegasus, anchoring the investigation in the lives of real people and their grounded struggles.

The exhibition also features a new short film by acclaimed documentary filmmaker and artist Laura Poitras, a long-time collaborator of Forensic Architecture, who accompanied the research agency throughout the investigative process. Poitras’s film is a visual study of the investigation by Forensic Architecture. Poitras has herself experienced invasive surveillance by different US agencies and as recently revealed, high-level CIA officials had lobbied to designate Poitras as an “agent of foreign power” to pave the way for her prosecution.

The exhibition concludes with two FA projects involving friends and partners hacked by Pegasus. The first is The Enforced Disappearance of the Ayotzinapa Students, which investigated the orchestrated attack on a group of students from the Ayotzinapa Teacher’s College in Mexico, in which six died, dozens were injured and 43 were forcibly disappeared. The investigation illustrated that, contrary to the state’s assertion that the attack was committed by organized crime, assailants included police, military and other branches of the Mexican security forces.

More recently, Forensic Architecture’s partners at the Palestinian human rights organization Al-Haq were also targeted by Israeli security forces using Pegasus. The Extrajudicial Execution of Ahmad Erekat, an investigation made in collaboration with Al-Haq, at the request of the Erekat family, and narrated by Angela Davis, examines the killing of 26-year-old Ahmad Erekat after his car crashed into a booth at a checkpoint in the Israeli occupied West Bank.