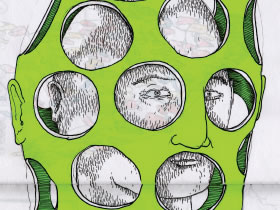 This year from 5 th to 7 th February The Influencers festival was held at the premises of the CCCB in Barcelona. The minds that are behind this exciting event, at its fifth edition, are: Bani ( lively and curious curator and designer), Eva and Franco Mattes ( 0100101110101101.org), and Marco Deseriis (journalist, researcher at the Department of Media, Culture and Communication of New York University and author of the book “Net Art, the art of connecting”). The large audience consists of people of all ages, many supporters who go every year to the Catalan capital just for this event not to be missed.

As the festival gives importance to the message on disadvantage of the medium, this year’s edition emphasized largely other components as opposed to the technological quality of the assembled projects. To tread the boards of The Influencers, artists must work in unclassified areas, embrace transversal sectors (including the political and social ones), propose collective and entertaining actions, are not afraid to get into trouble, absorbing arts that come from the street and that want to go back to the street, against homologation and market mechanisms.

The star of the 5 th edition was unquestionably Blu, an Italian writer who travels around the world and who attracted loads of admirers and curious people. Many of them, not satisfied, incessantly looked for him during the days of the festival to find the mysterious wall (the place was revealed only at the end of works. His gigantic shark made of 100 Euro bills, by itself lapsed to the inclemency of the elements, now sets off a street in the Carmel suburb.

This artist appeared with a Groucho Marx disguise, a mask and a wig, he didn’t grant interviews and didn’t reveal his name as well as any other information. As he is satisfied of his lifestyle where his inner creativity is the main luxury (an incontestable richness), he prefers the media to speak of more serious hidden facts, rather than deal with him. It’s an admirable modesty, although his point view is somewhat questionable. Luckily the media don’t exclusively talk about catastrophes, wars and injustice, but also about culture and art. And luckily there are journals merely devoted to these aspects of human history.

Among Blu’s most remarkable creations, we remember the external decorations of the COX18 in Milan, lately storm centred on account of its unjust closure; the painting on the wall that was built by the Israelite government to isolate the Palestinian territories; a very interesting experience of animation (“Muto”, a Creative Common movie you can download from the artist’s web site) that was realized in Buenos Aires in less than three months with 4000 shots and (and designs).

During his presentation, Blu wanted to give a little space to some local colleagues, who denounced a more and more extreme process existing in Barcelona since 15 years: the exclusion of art from the urban areas, the tendency to drabness and to institutionality, at the expense of some forms of expression that characterised this town and that represented spaces and social dimensions of great importance.

Another event guest of the festival was the New York group Improve Everywhere, embodied by the founder Charlie Todd who is famous for his urban actions (or Flash mob) organised with great groups of people who gather through web sites and social networks. In their web site we can see the results of their works: off-the-cuff musicals, metropolitan railcars full of people in pants, twins who act as human mirrors, raids at the Best Buy dressed in clerk suits, frozen travellers in stations. People’s reactions are exhilarating: some are lost, some panic, some burst out laughing, some others try to formulate hypotheses to explain the anomaly.

The taller related to the festival and organized in collaboration with Enmedio, was just the preparation of a mob in Barcelona: the bola. Unfortunately the event was decidedly below expectations, with the aggravating circumstance that who was not on the road by chance, but was placed there waiting for him, he had to suffer the cold gusts incessantly beating the town. The meeting that should have struck passengers actually camouflaged among the usual impenetrable crowd in Portal del Ángel. In addition, loads of people was advised and stood on both sides of the street waiting for the event, jeopardizing the surprise result. Some other time perhaps.

Other guest stars of the festival were: Julius von Bisbarck and his “Fulgurator”. A student whose look is anything but ordinary (Cleopatra style bob and beard till the belly) and is already very famous … how could he escape notice when he merges into the crowd of journalists to flash their shots. In his curriculum there are very interesting projects like the Stimmungsgasometer, an emoticon that reveals the Berliners’ general mood on the Schönenberg gasometer through a complex software that can read facial expressions.

Another peculiar experiment was the “Top Shot Helmet”, a hat giving him the aspect of an alien. From the top of a balloon a cam was shooting his promenade around the city, through a video-game frame technique. But the project that made him popular (and virtually rich if only he sold them to the advertising agencies and his ethics was less strong) is “The Fulgurator”: a camera in reverse that doesn’t shoot, but whose light sensor rapidly projects pictures as the photographers shoot photos with flashes. That’s how he generated (or rather caused a generation) the photo of Obama on the platform and next to a cross, the tourists’ photos with the Google logo on the triumphal arch and the photos of Mao with a dove on his face in Tiananmen square, Magritte style. The Fulgurator now looks like a camera, but at the beginning it had the shape of a gun as a symbol of mediatic weapon. But the risk of being arrested was too high…

After him the scene was set by our Wu Ming, which broke the dynamism and vividness of the meeting and broke off a great part of the audience, in spite of the themes’ exemplarity and depth. Maybe their Orpheus strategy (a way to contrast stories, information by giving other news, counterinformation) and the demonstration of how a deep analysis of a text and one word can completely invert the message. In this case they should have been presented in a lighter and more visual form.

That’s a shame, because after them, a great part of the audience was tired, hungry and it was quite late, so they couldn’t enjoy the meeting with other important artists like Wolfgang Stähle, who is one of the founder s of net.art, who invented “The thing”, and who is well-known on the history of art books.

Alas, a serious problem detained in US Mark Pauline from Survival Research Labs, a group that works on industrial and war technologies extracted from the context to create robotic performances full of special effects. But Mark gave the public of the festival a short video-connection via Skype.

And moving away from the Italian, American and German context, there is a group from Czech Republic: Ztohoven, a name with two meanings (“Cento merde” e “Fuori di qui”). The group displayed the preview after the process they faced because of their intervention on occasion of one of their actions, Media Reality. The group managed to go into a meteorologic programme on Czech TV and show the images of an atomic expplosion. After a long process for which they risked to go I prison, they were acquitted and they even won the price NG33 at the National Gallery in Prague. But although this event made them popular, they are used to the risk to go into trouble.

With the connection of the nucleus of 10 components with the dozens of collaborators, Ztohoven managed to cover with their manifestos many of the adverts stuck up the metro spotlights, until they organized an abusive vernissage; or they transformed the question mark into their own symbol, in which the heart is made of a red neon by Jirì David installed on Prague’s castle in honour of the president Havel.

And a woman at last! Swoon, a delicate street artist full of anxiety. She’s well-known for her collage-pictures but also because she changed a reality into a dream: to go through a river on a boat of artists. After a first experience with the project “The Miss Rockaway Armada” (2006-2007), in 2008 she created “Swimming Cities of The Switchback Sea”, a well-articulated itinerant installation this time made of seven boats.

Who couldn’t participate to the event and now is in despair, should simply look at the festival web site, where the conference videos will be published , and by now you can watch the past editions.