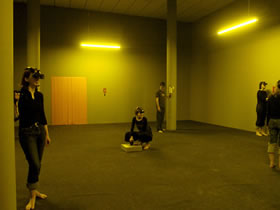 Mathieu Briand ‘s first US solo show recently opened at L.A.’s REDCAT gallery. Briand, who was seen last November on the occasion of the lap of Emergency Biennale in Chechnya at the Stecca degli Artigiani in Milan, works at interactive installations where computer, electro music, robot, video etc., make up situations, environments and atmospheres to explore and stimulate our perceptive system through experience, game and presence.

The use Briand makes of new technologies requires yet the active participation of the audience. Such as it happened the first time the virtual world was travelled, his installations work “hooking” the visitor in an environment “other” and playing with the point of view of the viewer in order to bring into question the truth of his perceptions. This extraordinary connection, this gate, this way out from the user’s world through technological mechanisms, represents an autonomous and personal answer for each “explorer” to the common dynamics of fruition, especially of rave and techno culture, and, in a wider vision, to the constant ongoing struggle to increase our daily experience with technology.

Briand’s show at REDCAT is named after Philip K. Dick ‘s novel Ubik (1969) and, exactly as this novel does, explores perception, presence, expectations and utopia of the future. Dick’s novel is a fascinating proof of the inadequacy in the linear, reductionist and rational last century’s dominating thought, symptom of an apparently inexplicable anomaly, of a split between what appears and what could be.

Such as Dick undermines the basis of the rational thought- the cause-effect relation-replacing a plurality of interactions, events, perceptions which do not lead to a single necessary solution but to plenty of possible solutions, Briand too suggests a universe, where what you expect does not happen necessarily, where our cognitive reference system is altered, based on laws different form those making daily life a whole perceived to be coherent. The final effect (?) is a deep mutation of our perception of the world, no matter which perception. Briand’s Ubiq is then a mind odyssey investing the body all, shaking and pervading the senses, from which it is impossible to resurface without keeping the physical memory of a dazing experience.

For this show Briand presents different installations, among which SYS *05.ReE*03/SE*1 \ MoE*2-4 : four made to measure helmets housing little cameras and screens guests can wear to observe the installation. A commutation device connected to the helmets allows the visitors to exchange one another their visual perspectives.

SYS*011. Mie>AbE/SoS \ SYS*010 (the spiral) is an installation provided with loudspeakers, rotating platforms and a mixer connected to an editing system guests can use to handle the original samples generating new sound tracks. It is even possible to mix your own electro compositions with the artist’s original ones and record a vinyl. The copies of the vinyl will be available at cost price in the gallery. Ubiq involves the prototype of a new video installation which let you observe a simulation of Earth’s rotation in real time: a part of Briand’s work studying the sci-fi future promised by Stanley Kubrick in 2001: A Space Odyssey.