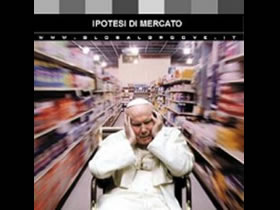 According to some scientists the word “virus” does not indicate a living being, but “information” contained in the DNA/RNA with a various alignment at some point of the genome. The virus enters into the organism and taking advantage of vital cycles and nutriment it infects it, it modifies the cellular morphology succeeding at times to prime modifications in the informative matrix of the host, represented by the DNA. From some years the macro international advertising organism has been suffering from a singular viral infection that has been slowly fighting internally in order to change of morphogenesis and reproductive mechanisms: cultural jamming.

The cultural jammers, cultural saboteurs, are advertising groups, communication artists and professionals that, taking advantage of an individual’s/consumer’s addiction to publicity, inoculate into mind television advertising, pseudo-events, posters, stickering, fake sites, underhanded viruses that replicate themselves among the minds provoking semantic short circuits and derailment of the advertising content from the straight path of produce-consume-die.

Born in Italy in 2003 Guerrigliamarketing.it , is an advertising agency that uses non-conventional communication techniques, like the creation of fictitious events or campaigns reaching the limits of the legality, through which “fuck the market in order to enter it”, entering the media system and taking away the automatism communication. Among the campaigns of the guerrillas: Rottama il Brand (Wreck the Brand), that promotes the appropriation of incentives for those companies that decide to junk their own obsolete marketing plans; Shock and Hoax, network of urban marketing actions on the national territory during which areas of various Italian cities have been swamped with alarming Military announcements of “prohibited Limits” and “military drills” in order to provoke in our life of western tranquillity a small shock and a lightning bolt of thought towards the war in Middle East; the creation of t-shirts Spazio Disponibile (Available Space) in order to make us think about the unpaid promotion of the brands through the clothes that we wear; the site of Espropriproletari (proletarian expropriation) that ironically promotes the actions of expropriation of companies as a tactic to obtain unexpected st raightening of media antennas, ergo advertisement at zero cost.

We had the opportunity to meet and have a chat with Andrea Natella, founder and chairman of the project Guerrillamarketing.it; this is what came out.

Claudia D’Alonzo: how did Guerrigliamarketing.it come about: who are the members and after what experience did you reach the decision to start this project?

Andrea Natella: Guerrigliamarketing.it was born out of a bet. Is it possible to imagine modalities of radical participation on the universe of brands and at the same time present oneself as an advertising agency? Is it possible for the professionals of communication not to give up their own political ideas in carrying out their job? Guerrigiamarketing.it is still a bet that is up against demands of income and the need not to betray this projectuality.

Our backgrounds are various. Personally, I come from experiences of alternative transmission, from the Luther Blissett project and an other strange experiment called Men In Red, a false collective of Radical Ufologia. The other members of the group have origins from the world of the political militancy, art, comic strips etc. We have always taken hand in hand these passions with average boring jobs, in the best hypotheses of little interest. With guerrigliamarketing.it we are trying to get away from some kind of schizophrenia. Objectively, however, we are precarious workers.

Claudia D’Alonzo: what are the techniques of guerrilla that you prefer to use?

Andrea Natella: There is no preferred technique. Each time it all depends on the idea that must be communicated. We enjoy ourselves more when we play with what is false, we invent unlikely stories and the mass media bites.

Claudia D’Alonzo: i have noticed that compared to historical organisations of culture jamming, like Adbusters, you don’t make use of television advertising. Can you explain the reason for this choice? How do you think the scene of culture jamming is changing in relation to the choice of media in which the viral communication is injected?

Andrea Natella: Actually, at the beginning we made a false ad for Esso. There is a couple that is coming back from a party in a car, they stop a garage and fill up the car. We see, however, that the petrol ends up in bottle and not in the tank. A moment after we see the man transform into black-block activist and he throws a petrol bomb. Then we see the slogan: “Esso good for war, better for guerrilla”. It was an attempt of repositioning the Esso brand during the war in Iraq to face the boycotting that came from the no global front.

But it is true that we don’t do many videos. This is because we try to keep a high profile and, nevertheless, keeping the technical costs down, making videos at an “advertising” level remains expensive from a productive point of view.

Claudia D’Alonzo: I would like to talk about the birth of cultural jamming in Italy. What are the roots of phenomenon and what influences have characterised its development?

Andrea Natella: we can say that cultural jamming has always existed . In a certain sense also the futurists did cultural jamming. More correctly I would identify the metropolitan Indians and the experience of the magazine Il Male as more direct premonitory group of the CJ today. I think that the true impulse, however, came from the experience of Cyberpunk that represented a new position within the mainstream media.

Claudia D’Alonzo: Speaking about psicogeomarketing, are there any general differences between the feasible strategies of guerrilla in Italy compare to those put into practice in other countries, for example compared to the United States?

Andrea Natella: More than anything else there are various inheritances. The European Cj tends to be more political. There is always a deeper consideration than is expressed in the United States. I would say although the label is American the European Cjs are more mature, they are not simply interested in raising a problematic question and each time they try to give an open reading which always remains complex. It sometimes seems to me that the American Cj stretches simplification to the maximum, this in some way facilitates the result but weakens the content: it is tinned more easily.

Claudia D’Alonzo: Among the techniques of communication used, how much has it mutated from the tactics of commercial marketing and how much from the contra-culture, from street the cultures, like for example stickering, the horizontal word of mouth of the mailing-list…?

Andrea Natella: Innovation is always born out of conflict. If there is no conflict there is no development. For this reason the street is the territory where innovation is consumed. Marketing is always subordinate from the point of view of innovation; otherwise you would not be able to explain the necessity to hire cool hunters, the really true strike-breakers of stylistic innovation. What we try to do is to increase the awareness that true value is produced by the consumers. Marketing has an exclusively managerial ability to put value into this innovation. The true problem is that street cultures are the true research and development units of post-fordist Capitalism. A unit to which, however, no economical counterpart is recognized.

Claudia D’Alonzo: You are an advertising agency and as such realized similar campaigns on a commission basis. Do you give yourselves ethical limits regarding the jobs you accept?

Andrea Natella: We will never make publicity for companies that produce weapons, furs or for any military forces or police forces. Having said this, our ethical limit is empiricist. Are we able to say something interesting with a campaign? If we accept the assignment, otherwise we try to refuse it.

Claudia D’Alonzo: Let’s speak about proletarian expropriation. How did this come about and what is the concept of this campaign? Is it a type of “historical” action of the antagonist movement; through which communicative strategies have you reinvented it?

Andrea Natella: Espropriprolatari (proletarian expropriation) was born out of ascertainment. To endure expropriation in the society of show business is objectively an advantage for he who endures it. Objectively it would be an advantage also for he who realizes it if issues of the legal type did not arise. We wondered about this labile legal border, for example the issue of how legality can at the same time transform an illegal action into a value and an action that creates value in something illegal.

Claudia D’Alonzo: You certainly expected the controversies that arose in the public opinion after some proletarian expropriations, but do you not think that for actions of this kind there is a risk of not reaching the people, not succeeding in communicating the message one wishes to communicate, but to provoke a closure in the average Italian, who is immediately ready to label you?

Andrea Natella: When the Corriere della sera (national Italian newspaper) titled with: “We offer an expropriation, it is worth more than an advert” a communicative short circuit was created. With this operation, we exposed ourselves as an advertising agency. We made people think that in order to sell a company it is ready to do anything, also on the border of illegality. We tried to confuse these borders. After that it is not always necessary that decode is linear. When we see a work of art by Duchamp we are not trying to find the one and only meaning. Works of art open worlds and this is one of the aspects of the things that we want to do, without necessarily being confined to the world of art.

Claudia D’Alonzo: do you think that guerrilla techniques risk being, at times, reabsorbed by the advertisng trade? Think for example about the Diesel Wall, about football championships on the Nike roof… are you running the risk of being ripped off by the market again?

Andrea Natella: There is an issue that every culture jammer should ask themselves when they think about an action: is it aversive, radical and innovative enough? Would it be even if it were “sponsored”? If the answer to this second question is no, then the answer to the first question is probably negative, too. If an action is radical enough it would be even if it had a sponsor. For this reason truly radical actions find it hard to sponsors.