If we just trace an imaginary line from the word object arrives to instrument, passing for artefact, we will soon notice the proximity between puppetry[1] (an always fertile breeding ground for a cross-disciplinary experimentation) and some contemporary concrete and electronic manifestations.

It’s with an approach that comes from performing arts and theater, in fact, that we will look into a noiseland that grows up above all in spaces dedicated to contemporary art (from art galleries to squat in Italy like in Europe). First thing, what we observe is that many of the researchers in this field, who operate mainly in the field of digital (electric and electronic), sometimes return to build the mechanisms of sound production in a completely analogical way (by tampering with the systems or creating from scratch an ex novo and ad hoc set for their performances).

That’s how often situations arise in which the visual aspect of instruments (everyday life objects or artefacts) overflows from a sound dimension. The formal outcome underlines the relationship between who plays and the tool that produces sound focusing on gesture and physical involvement of the artist (a builder and/or an assembler; a performer in his own right that interacts with all the elements of the stage).

This is an outcome not so far from what we call “object theater”, crown jewel of a festival like Incanti – Rassegna Internazionale di Teatro di Figura (Torino, Casa Teatro Ragazzi e Giovani) that has just dedicated its last edition to music and not so far from the atmosphere that sound draws in Giulio Cesare by Socìetas Raffaello Sanzio, when a series of mechanized lightbulbs just fall down and shattering. 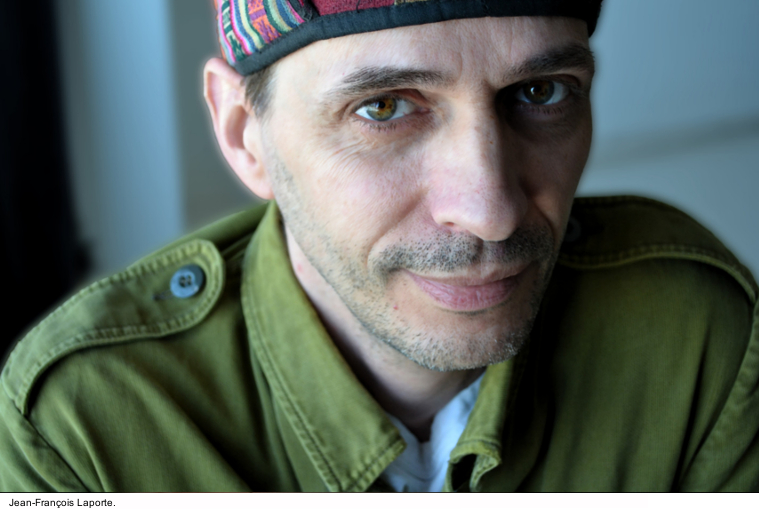 The presence of an object, picked up from everyday life, is something that sounds for the Japanese artist Ryoko Akama, currently based in Manchester, that moves into the dimension of almost nothing applying little magnetic mechanisms and shifting paper balloons, crockery and other small metallic tools. A very thin line divides the “concert” of this composer, with her silent presence and phlegmatic gestures, from pure performing arts; on the contrary, we have another composer like Jean-François Laporte using intensely the whole body applying his self-made music tools.

We can say that with “artefact” we mean basically the outcome of a process of self-building of a sound tool. This is what happens thanks to the assembly of simple objects that are often combined with musical instruments or that are controlled by electronic devices.

This is what happens in LBB, in which Laporte (frequently in Italy from Biennale Musica 2011) works with Carlo Barbagallo, songwriter and founder of Noja Recordings (here playing electric guitar, effects and samplers) and Emilio Bernè who conducts a personal gesture research combining metal strings and little objects on a minimal drum set that simulate electronics.

With LBB, trio that we saw in different stops of Multiversal festival (Turin and Marseille), Laporte manages a combination of prepared piezoelectric elements, acoustic feedbacks and little vibrant objects controlled by pads. In LBB, where electronics mingle with rock and free jazz sounds, the process of self-building and the performing dimension of the musician are visible, but we can see better these elements in works like The Pipe or (on the opposite side) The Flying Can.

The first is a perfect example of a theater machine, or better, it underlines the possibility that a theater could be contained in a unique and fancy object. This device, despite a great presence as installation, is an instrument that (like many of them invented by Laporte) can meet later the hands of other musicians eager to compose and perform with that (Stefano Bassanese composed Le Perroquet for Pipe and electronics). 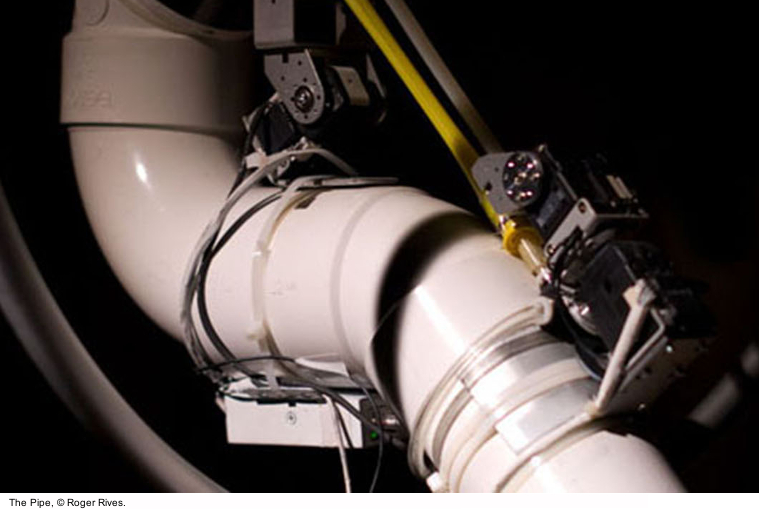 The Pipe is literally a big pipe that works thanks to compressed air, a robotic windwood with mechanized parts controlled by a pad or a laptop. Laporte’s assemblies look like “macchine inutili”[2] such as those of Munari or Tinguely, showing a mechanism, but it’s not true at all that everyday life objects are absent. They are into Laporte’s tools but stripped of any reference to everyday life, they are transformed and unrecognizable, incorporated into the sound process.

The Bol (Bowl), for example, is another compressed air instrument: in this case this is a membrane of a balloon that let the emission of frequency. The Flying Can is maybe the instrument that most of all moves the central axis from Laporte as a composer/musician to a creator of situations and performer. During the performance with the Flying Can, Laporte is on the middle of the space and of the audience, he stands up on a chair and let his instrument (made with a can and attached to a wire) drawing ellipses in the air and emitting ambient sound vibrations.  An action that Laporte himself defines as a “ritual” and in which the musician and his artefact are the pins for creating a community.

Giulia DeVal: My point of view on your work in not quite musical, but more linked to performing arts and theater in a kind of way. I would like to propose you a reflection on three words that are related and that are part of your practice: “object”, “artefact” and “instrument”. How do you build your mechanisms and how important is building, for you?

Jean-François Laporte: I think I’m more a scientific researcher in the way of thinking, this approach covered all my works. I’m very interested in discovering, researching in new technologies and this attention brings me to look things in a different way, more open and not stopped at the first line, for example thinking “this is a violin so you have to play this like that because it’s a violin”. It’s more like giving a violin to a pygmy, he can do other things, maybe music, maybe not, by the way it’s something more interesting for me.

About building, I was born in a family of people that build houses, so I’m used to working with materials since I was very young and it’s a sort of background that is always there. 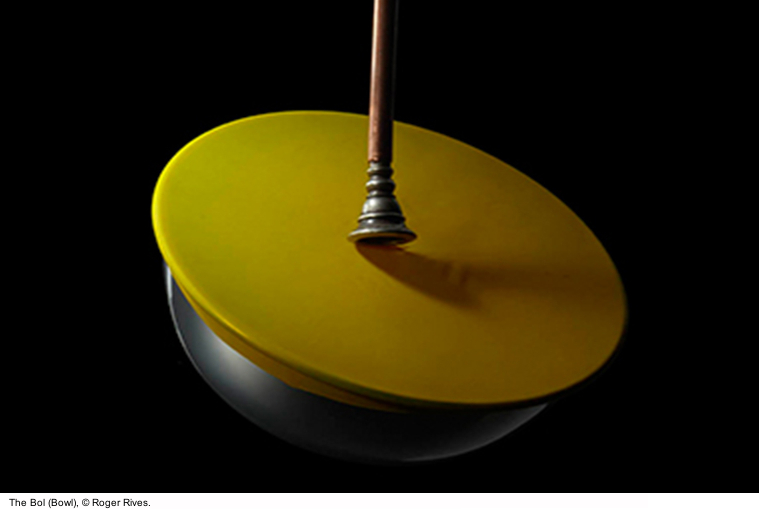 Giulia DeVal: How do you define the mechanism that you produce?

Jean-François Laporte: I try mostly to develop instruments able to produce different kinds of music, they become objects when there’s not much potential for sound. Every instrument that I invented arise when I discover a principle, there is a richness in this moment, it’s like a sparkle; something happens and – wow! – you see this richness e you feel the potential, that’s how you start the process to discover other principles and you have to play with techniques because it’s all new.

Giulia DeVal: I notice that you don’t use everyday life objects that have a reference with a precise imaginary (cups, spoons etc.). As you told me, you develop “instruments”, but can we say that yours are “artefacts”?

Jean-François Laporte: Yes, in a kind of way. When you see the entire instrument is something more imaginary, there is a second level. For example in The Pipe or The Flying Can. The same with The Bol (Bowl) that is covered with a balloon; it produces an incredible sound and when you know that is a balloon you think “Oh! It’s just a simple object”. Working in this way with objects, that are something very concrete, can bring to an abstract outcome.I remember very well the impression that I had when I discovered the basic principle of this works, I was very inspired by sound and now they have become instruments for which people write music. They come with their idea and they play. When I play I focus myself on some things that I like, other musicians play in a different way so they show me other unknown aspects of the instruments. 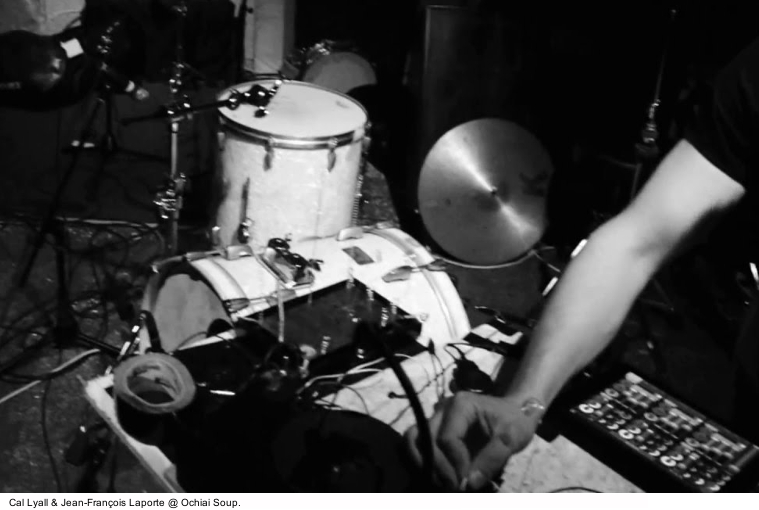 Giulia DeVal: How important is the visual aspect as installations of your artefacts/instruments?

It’s very important, I had a teacher when I was studying at university that never talked about music. We always reflected on other things: the title, the light, the visual aspect of the object, where is the audience, how the audience get close to the sound and the object… All of which led me to think not only on the musical aspect but on the entirety of the creation. Mostly for installations the object and its visual aspect are very important, I try to build that as beautiful as possible. There is a good phrase of Henry Partch, who is a Canadian instruments maker, that says basically this: a long time ago people lived in tribes e passed all their time building an object producing sound as beautiful as possible, after, it was used in rituals to give sense to their life. For me it’s the same: to develop something very beautiful that produce sound, then I can live with this instrument a moment of ritual.

Giulia DeVal: As a performer, which is your relationship with the sound tools you create?

Jean-François Laporte: Well, the performance is connected to sound, the objects/artworks are there, but it’s more like a game between me, as a musician, and sound. While playing I try to be less intellectual I can, which is why many of my instruments are very physical.  I don’t like it when in a performance I don’t see the body involved in the process, for example when a performer just pushes bottons and the sound comes out by itself (he can go to take a coffee and return and the music it’s still there). I like the tension generated by the human being producing the sound (even when he is not). Also, the electronic musician has to be like a violinist, he can’t stop playing, take a coffee etc.. The body is very important in the process and so is the ear, in relation to the body.ù

Jean-François Laporte : Yes, I have never studied motion, but I focus on intuition. I just observe what they do and steal images, ideas… I think that is the best way because only sensitivity can create music. I never composed for the dance, it’s not my way of working. It is not music serving dancers, on the contrary, it’s the dancers’ body responding to an impulse started from my mechanisms. I have a project with a company to which I asked to create a choreography starting from sound installations; this is something very different from what they normally do, they have to create something about that, they have to react. Especially when you work with physicality I think you are working with the universal at a certain point, because everyone can discover the same things, there is something that is natural, so everyone can tune their body, mind or ears related to the physical phenomenon and it comes natural. 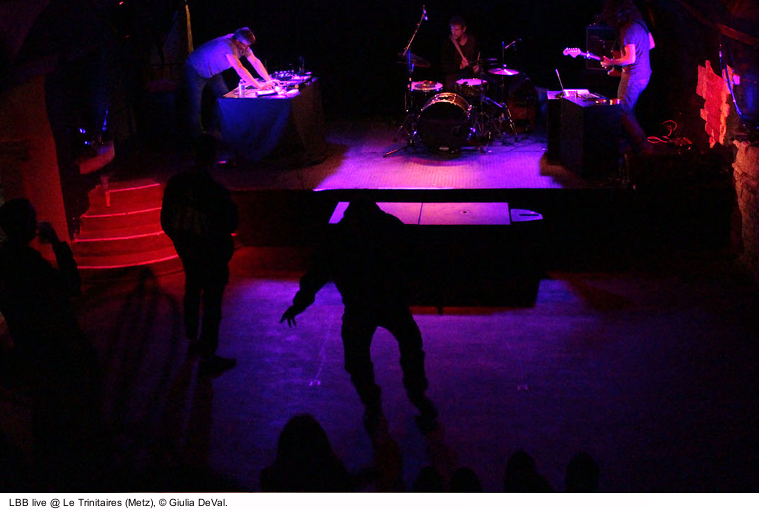 Giulia DeVal: In your opinion, could an object be a theatre? Could a mechanism work as a small but complete theatrical machine?

Jean-François Laporte: Yes, of course. But we have to put imagination into things. Sound is something abstract, even if the phenomenon is not, for this reason I think we can create any kind of image, many visions at the same time. People often ask me what the meaning is, but there is not a meaning, it’s your meaning. When I go to see a show I want to be surprised and simply live an experience and I don’t like someone telling me how to do it and what I have to watch or listen to. This happens especially in classical music and that’s why I’m not very attracted to it. Wherever we have rules, I like working freely and creating something different.