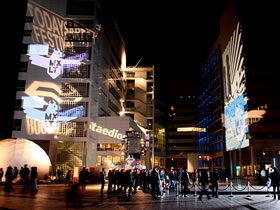 The Hague , The Netherlands, is a little city with no more than 1million inhabitants and 1hour and half from Amsterdam . A grey sky as scheduled, avant-garde buildings, cycle facilities and the hundred-year-old Royal Art Academy . This Academy pays attention to anything artistic or modern. The weekend of 21 st – 22 nd September was dedicated to the Todaysart Festival. I’m coming from a couple of days in Amsterdam and the impact with the political capital of The Netherlands is completely different.

Here you can find the politicians’ chairs and the noble room of the royal family, one of the richest in the world, as it is said. And this is due to its trade and a politics of marriages with the most important and wealthy European royal families. Here the guys walking on the streets show a different mood and who lives in Milan can understand what I mean. There are just few tourists round the streets of this city which is getting ready for the beginning of the impressive kermis. Digicult is present as media partner and for this occasion a quick thought accompanies my arrival: how can I follow all the events proposed by Todaysart in a span of 2 days? How will I find the connection, the main idea staying behind all that and where the time and way to enjoy all the offers? I won’t tell you how, but I did it. I walked for more than 12 hours a day among the 25 locations (!!!) settled in a fortunately restricted area around the Grote Marktstraat. The purpose of these locations was evidently the creation of a continuous stream of people (according to figures the visitors during the 2 days were above 20000), lights, visual, sounds, music, installations, performances, shows, workshop and chattersa lot of chatters!

It’s not simple to describe the Todaysart FestivalPerhaps the best thing to do is, as well as the art director Olof Van Winden did at the opening, starting with the code of the airport accompanying this 3 rd edition. THX  The Hague International , this is the code for a so desired airport which has been subject of heated debates for ages: The Hague hasn’t got an airport. This is a real fact. But at the same time it hosts one of the most interesting and flourishing modern art festivals. And every year this festival allures over 200 artists from all around the world for more of 350 exhibited works on the whole. Moreover it makes the city a hub for intercultural and professional connections. And this represents another reality the organizers wanted people to think about.

Which way was better than using art as a communication mean to make both the city and the present public consider the topic? No other. And so the main street of the city, that above mentioned Grote Marktstraat, an about 500 m mall and cycle facilities , represents the perfect setting for one of the most powerful and effective city installations we have ever seen. Imagine to drift around enjoying the lights of a airstrip, fixed on the bases set on your right and left along the cycle facility, each at a distance of 5 m . Imagine to be slowly but unavoidably overwhelmed by a deep, low, powerful sound flux, spread through over 100 speakers at over 80 db coming exactly from the light bases. All this reminds you a plane motor. But you grasp it immediately: it’s not a suggestion, it is the noise of a plane and more precisely, the sound of a Boing 747 taxiing in the airstrip! You walk along the cycle facility clearly changed in an airstrip of an unreal airport, still not built. The sound grows, surrounds you, lights are periodically turning on, something is going to happen: the plane is about to take off. And when it departs, impact and feelings are just indescribable.

I started with the work THX, The Hague Int’l realized by LUST with Mike Rijnierse and Detlef Villerius‘s soundscape because I wanted to underline the remarkable city impact that most of the Todaysart Festival installations had on roads, buildings and square in The Hague. Near the festival core, the City Hall and its Atrium, it prominently stood the Tryptich installation by the English collective United Visual Artists, well-known for having created visual productions for bands such as U2 and Massive Attack on tour. The installation consisted of 3 columns of interactive led. Their intensity and sound depended on people movements and their distance from the light array. As they stood in the middle of the square Spuiplein, a simple degree of interactivity and intervention in the city landscape was reached, being at the same time fit to draw the normal relations among people and the city environment. And always at the Spuiplein, during the 2 days, other interventions on the building surrounding the square took place. They were bound both to graphic designers shown at the Art Gallery “Maxalot” in Barcelona and to Inocuo Design and Build‘s live performances. These latter were directly casted on the external walls of the City Hall, a project of Richard Meyer.

Inside the huge Atrium of the City Hall the installations and performances are several. First of all Daan Roosegaarde’s marvellous work Flow 5.0, an interactive installation very concrete and very little digital for its aesthetic: a track through 2 barriers full of fans set side-by-side. It is able to turn on when people pass and when they perceive every lowest sound produced thanks to sensors set at the work basis. The final result is a visual and sensorial effect of certain effectiveness. And yet: how could I not mention the surprising live of Claudia Marzendorfer and Nick Hummer with their Frozen Records? Cool sounds and noises conveyed through a physical work: they come directly from a sort of ice disks lasting maximum10 minutes, sampled through a range of electronic instruments and spread with ethereal charm in the wide space of the Atrium. Louder, more playful and amusing were the guys of the Kabk in The Hague , more precisely those attending the Interfaculty Image and Sound/ Art Science of the The Hague Royal Academy. This academy celebrates this year its 325th foundation anniversary with the students’ projects referring to movement.

Yet, in the Atrium there were also other interesting live performances. They were exhibited by The Hague Tag Gallery and were part of the Information Aesthetics project. The first one deserving our mention is surely Man in E.Space , a project of multimedia interactive dance shown by the Belgian Lab (au) in collaboration with the French group of dancers Res Publica. It dealed with a very refined and well dramatized performance representing the relation among body movements, neon lights and videos projected on cloths hung in the middle of the stage. The 2nd one was then an outstanding live of Kangding Ray. The architect and musician’s performance created a very interesting sound pattern composed of digital, electrical and analogue sounds.

But Information Aesthetics didn’t end here. On the contrary, its most appealing side and very close to the project title was the long conference organized in the FilmHuis halls. It was focused on the visualization of complex structures of digital data, as for instance the reproduction of real and concrete fluxes and phenomena, using generative art and graphics. The hosts of the panel were: Casey Reas, Marius Watz, Aaron Koblin, Karsten Schmidt and others, taking over in their role of presenters of the respective works. They explained the work methodology and applications of code in shapes and ways which have taken inspiration by graphic and project design. From this point of view, the festival offered very interesting works such as Alex Dragulescu’s Spam Architecture printing, the installation of Reas at the Tag headquarter, Aarn Koblin’s Flight Patterns visualised on the walls of the buildings surrounding the Grote Marktstraat.

Other installations were all around the city, especially inside the 3 main churches in The Hague , something just unimaginable fro Italians like me. The Lutherse Kerk was assigned to Robert Henke aka Monolake who presented 2 projects: Layering Buddha (based on the sound produced by the notorious Buddha Machines) and Linear Grid (based on the possible ways of voicing the relations among people in the web with the purpose to overrun any physical space-time barriers); the Nieuwe Kerk hosted a playful I nteractive Playground cured by the Dutch Villa Nuts foundation and at the end the Grote Kerk witnessed Daan Roosegaarde’s 2nd scheduled work (called Dune 4.1 , it is a luminescent-stemmed flower-bed able to interact with sound and traffic in order to draw a fascinating track mid-way between nature and technology) and also the marvellous interactive work of the young Daan Brinkmann, 16 pillars , a design project composed of 16 sound and light linear structures moving at people passing by near them).

Indeed at the old church, the Grote Kerk, each evening saw the most intense part of the festival: the very beautiful live performances by Pierre Bastien and his fascinating Automatic Orchestra, not to mention those of William Basinski and of Phil Niblock. Appeal, research, original work on sound: there are the projects of some pioneers very different from each other, but perfectly at ease in the strict spaces of a church in Northern Europe . And it was even permitted to smoke inside the church, can you imagine that? (In Italy , as well as in France , Spain and other countries there’s the prohibition of smoking in public places)

Other prominent performances were the audiovisual work Rhythm Exp by Frank Bretschneider, played on minimal rhythmic glitch aesthetics. This feature, also present in all his previous works, made his label Raster-Noton (in partnership with Bender and Nicolai) famous . The Berliners Mikomikona and their performances are worth as well. They exhibited the proven audiovisual performance Fourier Tranzformation I + II. There sound and images are obtained by a fascinating game of electromagnetic fields induced by 2 overhead projectors and a sequence of patterns drawn on transparencies mirrored by the same projectors.

And at the end the club side couldn’t miss in a respectful electronic art festival! Actually it was impossible to follow the whole program comprising several locations and clubs: the new church (!!!), the clubs Asta and Paard Van Troje, Korzo and the King Kong Galerie. Techno, ragga and dubstep are the main music types. They occupy whole halls and programs as we would like at our latitudes. Noze, Boxcutter, Legowelt, Modeselektor, Ascii.disko, Spindokter Ries, Tommy Sunshine  these are some of the prominent names in the program.

During these 2 days I tried to see the most I could remaining fascinated by the organizers skills in keeping a common underlying theme and not to exceed in making the festival spectacular at any costs. Installations, urban interventions, workshop, round tables and live clubs were integrated in a weekend characterised by art and innovation. If I didn’t manage to see and tell you everything I apologise, better luck the next time.