NOME is pleased to present Nora Al-Badri’s and Nikolai Nelles’ first solo show, Not a single Bone. The artists will show their most recent project Fossil Futures which results from research (funded by Haus der Kulturen der Welt), at the Tendaguru Beds in Tanzania, a former German colony that was the site of systematic excavations of dinosaur bones during the colonial era.

Art historian W.J.T. Mitchell writes that the dinosaur is “the totem animal of modern culture”— whether analyzed by empirical scientific methods in the West, popularized by Hollywood, or the object of native ritual practices. For Nora Al-Badri and Nikolai Nelles, the dinosaur activates a public dialogue on mass extinction and extraction, also in terms of a “cultural fracking” related to a hierarchy of knowledge and the role of Western science.

By manipulating and reproducing these fossils with the help of artificial intelligence and leaked data as well as with the classic tools of natural history museums, the artists question the fictions of authenticity told by Western institutions, and seek to uncover alternative emancipatory narratives. 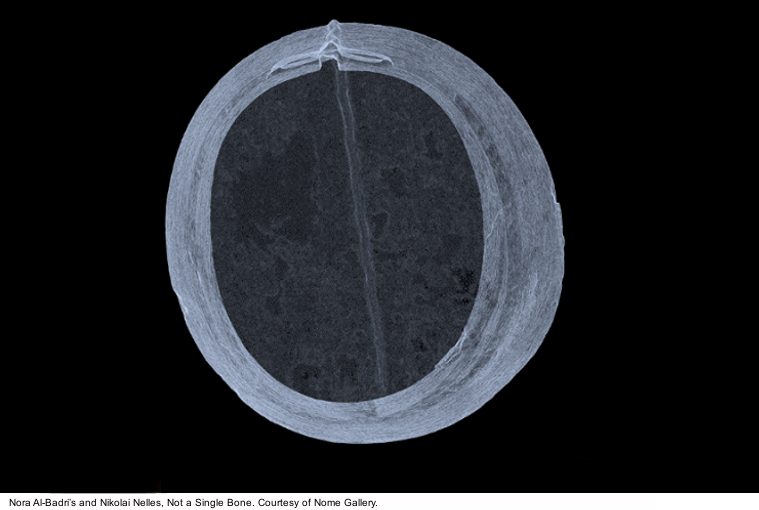 The duo also presents an iteration of their acclaimed project The Other Nefertiti (2015), based on an “open-sourcing” of the Ancient Egyptian Nefertiti Bust through a data leak, in order to make it publicly available and display it in Cairo—an intervention into the production and commodification of global heritage and cultural goods.

The replica and its various representations, along with The Other Nefertiti’s remixes which have emerged across the world, address the exploitation of colonialism and unequal global power relations, and critique the continued display of such “treasures” in Europe.