Walking In The City With Christina Kubisch 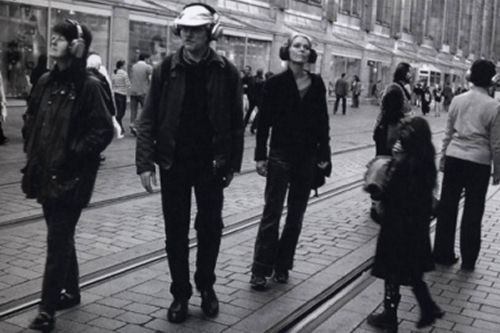 Christina Kubisch, one of the most important sound artists on the European scene, began to work in 2003 on a project called “Electrical Walks”. This project uses custom-built headphones which transduce electromagnetic fields into audio signals, through an interaction between force fields which allow the audience to listen to a concert of ambient sounds in public spaces specifically projected.

Christina Kubisch‘s activity consists therefore in mapping a territory, in order to detect hot spots where audio signals are especially strong or interesting. The audience wearing the headphones takes part this way to the discovery of new acoustic spaces, by means of an aural itinerary through a thick net of electromagnetic information which are invisible and omnipresent. Actually, the activity of the German sound artist is much more varied and it has started many years ago: in the 1970’s for example, she had many performances, even if she has always declared to be “unhappy with the predetermined or limited time for the audience to take advantage of the “works”.

Also for this reason, Christina Kubisch has always desired to do something more open, where people could manage their own time, without stopping too long in front of the work of art or the artist himself. Still today, her work is tied to different elements, and resumes some interests related to the work with light, coming from her experiences with theatre and dance. Light has in fact for Christina Kubisch the same qualities of sound, being a non-material phenomenon that can, and has to be, used as a narrative element; sound and light are for the artist two interlaced elements, so that the first can be used for the visualization of the second (like in the case of ultraviolet light, normally not visible), and vice versa (like in her most renown work, ” Licht Himmel “, 2006, which she created for the magnificent ex-gasometer of the city of Berlin).

Christina Kubisch lived in Milan from 1973 to 1987, and our encounter with her took place at the Palazzo della Triennale , during the Milan show of her touring project called “Electrical Walks”, invited by the gallery O’ and by Die Schachtel for the project realized for InContemporanea and Uovo performing arts festival, which I thank for their collaboration they gave me for this interview.

Matteo Milani: Christina, could you tell us about your background, and how you arrived, through your career, to conceive the “Electrical Walks” project?

Christina Kubisch: When people asks me what I am, what do I do, I always struggle to answer. I am an artist, a composer, I work with magnetic inductance, but I also write pieces for other musicians. I am a performer, I draw. It’s hard to define me. I was a flautist, I studied Composition with Franco Donatoni at the G.Verdi Conservatory of Milan, and also Electronic Music with Angelo Paccagnini . At the end of my studies at the Mila Conservatory, I started a much more personal and effective research, attending for 2 years night courses in Electronics. During these courses, I discovered a telephonic amplifier, a small cube, from which came curious sounds. This cube had inside some coils, and it amplified the magnetic sounds close by. Fascinated by this system, I had 50 special cubes built, and with them I created my first installations.

Sometimes at night I go through electronics catalogs and ask myself what I can change, subvert, using some components in an improper manner. Then I discovered headphones. I had them built in Bologna , after having projected them with an engineer. I still use them, only the internal components are different, but the exterior of the headphones is authentic, dates back to the first years of the 1980’s. Obviously, the listening is easier than with the cubes: it is more comfortable now to go around with wireless headphones. It is interesting to see how people move, some run around in the space, some go around slowly: the more people move around, the more interesting are the things they hear. Each movement of the head produces big changes in timber and amplitude to the sound people listens to through the headphones.

Matteo Milani: This project is an important document to understand the state of electromagnetic saturation on our planet, it is a study on the “invisible” noise pollution

Christina Kubisch: In every city, especially in the big ones, an incredible number of electromagnetic waves is hidden; they’re everywhere, we can’t hear them but they’re here! Everyday there’s a bigger amount of digital communication on one side, and all the security systems on another, and they all bear substantial magnetic fields. I began to plan routes in the big cities, just when I started to receive in my headphones disturbances I couldn’t analyze (very strange buzzes & rhythms): actually, for some years (since the beginning of the 1990’s) I had to stop doing my walks because my gear was broken and I could repair it only with the help of a sponsor. In 1999 I found the sponsor, but during those few years of interruption, the world of magnetic fields had grown exponentially! For this reason, I decided to use those disturbances like sounds to explore: one of the first cities I explored was Tokio . I also gave my headphones to Alvin Lucier , who was there for a festival, he had a long walk with them and than he told me: “This is a concert!”

The city is both an individual and globalized element, and with this experience I could expand both aspects, documenting them through pictures as well as video: lighting systems, transformers, ATMs , electronic security systems, surveillance cameras, computers, antennas, navigation systems, cash registers… the city itself can become a concert.

The oldest sounds (trams, train stations), the ones dating back to the last century, are also the most musical. This is what I define “Electromagnetic Anthropology”, in the sense that each and every station has its own distinctive sound, usually connected to the date of its construction. The Stazione Centrale in Milan , for example, is fantastic, I almost got crazy when I went there, and I will be back soon to do some more recordings! In Milan you can actually hear the trams from far away, not only when the listener is close by.

Matteo Milani: Are there places where you actively look for “hidden” sounds, and others where you instead wait for aural information which renew periodically?

Christina Kubisch: Sure, there are sounds I exactly know where to find, in places like banks, or close to light signs. Lights actually emit curious sounds, just like LCD or plasma TVs. Internet or Bluetooth antennas emit very strong and annoying sounds, but they are part of our life. It is always nice to find something new, very strange sounds, but their source remains unknown. In some Countries, especially in North Europe and the USA , it is mandatory for stations to have induction systems for hearing-impaired people, so every kind of announcement can be broadcasted . These systems often are in places where they shouldn’t be. For example, it happened that while I was walking around a street, I could hear everything that was going on inside an office, including voices and computer activities. I have a collection of hundreds of hours of recordings in my archive: I don’t know if this is music or noise, but I’m always fascinated by this aural universe halfway between heavy metal and pop music!

Matto Milani: What are your analogue and digital work instruments?

Christina Kubisch: All the sounds I record with my headphones are so interesting that I don’t need to transform them much. I mainly work with Pro Tools for editing and pitch-shifting. Besides, I use filters in the frequency domain, with which I can do many things, finding sounds hidden behind other sounds. I have always been fascinated by some instruments which cannot be immediately recognized. On this subject, I published several records  using the Glassharmonica , an instrument invented by Benjamin Franklin in 1761, and Diapasons. Some of these instruments are quite big and they reach very low frequencies, up to 40 Hz. I also used signal bells used in underground excavations: they are partly electric, partly acoustic.

Furthermore, I like to work on spatial, four-channel diffusion systems, where I can obtain remarkable results. Nowadays, we think we have any sound at our disposal on the Internet: my students for example rarely record anything, they look for sound files directly online. They do not realize that the offer is limited, pre -determined. This is why I always use field recording in my compositions, so I can show a world still existing today; working with field recordings has become more intense lately.

Matteo Milani: Which cities surprised you the most on an electromagnetic level?

Christina Kubisch: In Oslo I found beautiful, strange things, that I couldn’t find anywhere else. This is the real pleasure of going around like in a safari, especially at night. It may sound like a joke, but the kind of sound I prefer is that of Perfumery lighting systems (for example in Via Dante, Milan ). Banks instead have a very high pitched, sinusoidal-like sound. Never heard such high and strident sounds! The map of Electrical Walks for me is like a score: until now I made 23 walks, and the next stops will be Copenaghen and Leeds . In 2010 I’ll be invited to map the Ruhr region, one of the biggest urban areas in Europe , which will also be the European city of culture in 2010. I’ll follow a walking route in several cities, but also by car, train and even bicycle.

For this, I’m trying to enhance the headphones by building an instrument I can carry in my backpack so that I can listen to high-tension lines in the countryside, some kind of electromagnetic Land Art. By using very strong and heavy coils, I could pick up many magnetic fields, thus breaking the limits of the present receivers

Matteo Milani: What are your considerations on the present situation of Sound Art?

Christina Kubisch: What’s really new today is the desire to create art which not only sits on the wall, but which instead can be a deep personal experience. Sound Art, when it’s good, allows this experience through an individual listening, which arouses ideas and memories, different for each of us. Furthermore, Sound Art moves through time, and this makes it more difficult to use it as a collectible object, as it often happens today.