The Explosion Of The Arts. Sineglossa Live Performances 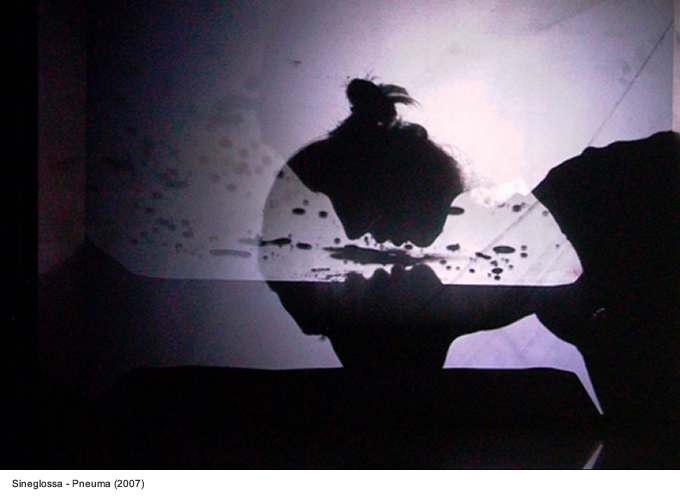 Sineglossa is an artistic collective living in the Marche region in Italy, including personalities from different disciplines with the same purposes and the same sensitivity. Created in 2006 by director Federico Bomba, painter Luca Poncetta and performer Barbara Hall, the theatrical debut happened in 2007 with Camera Verde, to which followed in 2008 Pleura e Pneuma. In 2009 are among the companies winning the contract ETI New creativity, working on Undo and Remember me.

Federico Bomba is a philosopher, a true connoisseur of image and vision dramaturgy. As emphasized in the group, their main strength lies in the limit of presence, where everything happens here and now and especially in real time. No records, no virtual simulations, but tangible bodies uncovered and covered by a light that makes it look stylish but can also obscure, overlap or photograph.

Their human software is a sort of recognizable “label”, connotative, bold and brave but true, that goes right to the problem of representation. A simplicity to our eyes, conceived as a concrete invasions of crafts machines, subtle and detailed movements, image phase displacements and dematerializations, hides and apparitions, shadows and reflections that lead to the phenomenon of mirage and of change of perception. 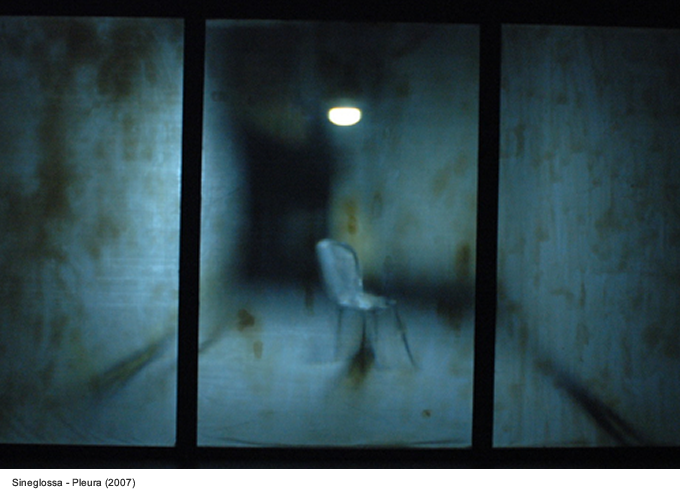 We can say that the work of Sineglossa is “an explosion of the arts”, where the importance of sculpture, painting, space, lighting and body movement is undeniabled. Within the complexity of their staging, kinetic art and light art enters in – as Rosalind Krauss points out when she speaks of theatricality in his 1981 essay Passages in Modern Sculpture – evoking a Moholy-Nagy‘s space-light modulator or some scenes for Swedish Ballets designed by Picabia.

We can come to evoke the task performances evoked by Annette Michelson, where “a dual strategy was served at the same time: replace the real-time with illusionism”. We can speak about a thousand of returns, but the truth is that these languages-movements of the past serve as a pivot to be treated, subjectively bypassed, extended and interpreted in a contemporary world where digital is king. We are witnessing today, with live performances of Sineglossa, to a reunification of the arts dedicated to the show, thus restoring the primacy of the eye.

There is a tendency to explore repetitive compositional systems, simultaneously hallucinating, altered and accelerated / slowed at the same time; the visionaries values are enlarged. The scene is now given through the intervention of light, that escapes and emphasizes, remove and alter. The physical human presence almost remains impalpable, as a frantic and never banal research; human presence as paradoxical dematerialization of the entire stage event. It is the public who chooses, who decides and who is identified with certain mechanisms and metaphorical associations. 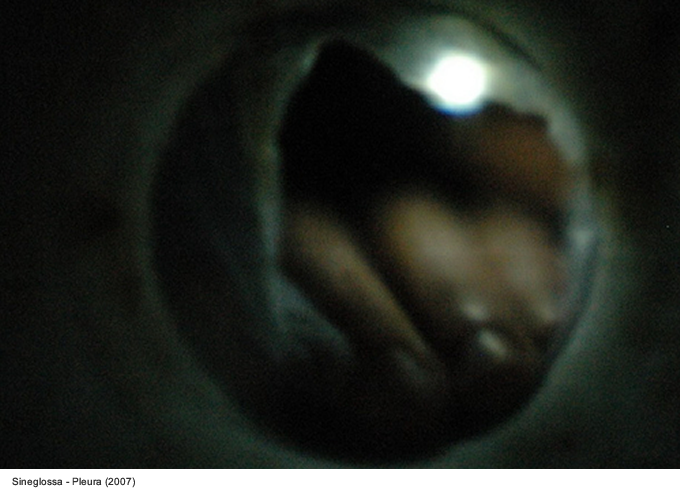 Massimo Schiavoni: How and in what circumstances was the company Sineglossa born?

Federico Bomba: Sineglossa was born in a few days of reflection, with me as glue. Each of the components (we were 6 at the beginning) was barely knew, but I esteemed them all. I knew they were waiting to leave everything and to begin an art project where being not only performers. Sineglossa was founded at Pianoterra, a small industrial warehouse close to Santarcangelo in Italy, in which the Teatro Serra company hosted us for the first residence: it was probably the best ever.

Massimo Schiavoni: I am interested in this first residence; you always said that, at that time, something borned, evolved and implemented. What technical-dramaturgical or theorical enrichments took shape there and what motivation forces supported you later during your first experiences in the contemporary theater scene?

Federico Bomba: In that context, while we were creating Camera Verde, our skills tried an approach. We needed to build up a common language, shared codes. We were seeking an imaginary to be quickly communicated to each other. Today, this process is initiated: the empathy that we have achieved is amazing, like the one that couples who love each other for years reach. Our first project was nothing but a bunch of professionalism, far from uniform: it was predictable. But, there were already all the elements that distinguish us today. The dramatic focus, the relationship between the actor’s body and the light, the presence of temporary collaborations which inject new energy inside the group.

Massimo Schiavoni: In your creative language the light and therfore the darkness are very important. What do you mean when you say that “the presence of reality tends to disappear?

Federico Bomba: We think there is great potential of the imagination in what you do not perceive with clarity. Part of our poetic dialogue with the public requires the completion of the vision by the viewer. I think the over and under exposure are enough fertile extremes, which immediately remove the idea of verisimilitude, to be confronted with something completely known. So does our image work: as soon as we think to possess it, just vanishes, leaving the retina impressed. 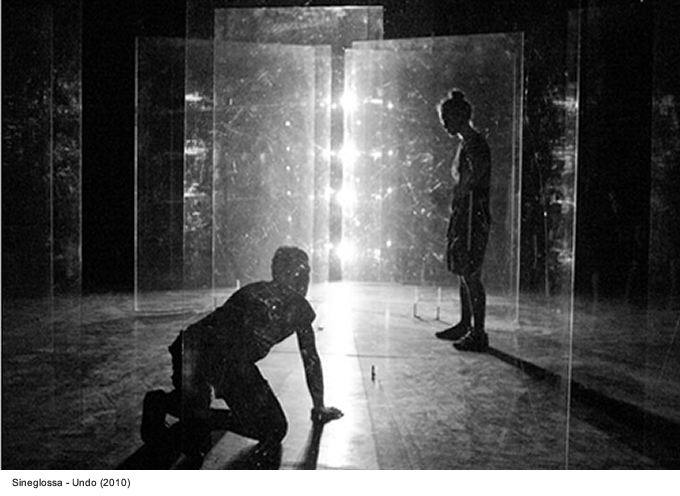 Massimo Schiavoni: In your shows, everything happens ic et nunc; no reproducibility, no past and no future, direct as a thread linking image, representation and audience. So, how is your link with technology and the digital? Is it possible to talk about technology and humanized effects in your works?

Federico Bomba: As regards Eresia, our last project, we are continuing our choice of independence from technology, forgoing even the lighting console and building a xylophone with sticks which, through the percussion of copper platelets, activates the light sources on the stage. Even the electronic music, we always used in previous works, is disappearing, to make room for voices of the people who inhabit the places we create.

The goal for Luca, who is managing lights mixing, is to experiment as “human software”. Changes in light intensity are calculated for the entire event in the same way that a program would be able to drive the instruments used. The gap between the human and the technology remains, not running a very strict pattern, which requires continuous practice, but in the possibility of micromovements a few tenths of a second. Movements that would not be possible with any machine, however sophisticated. 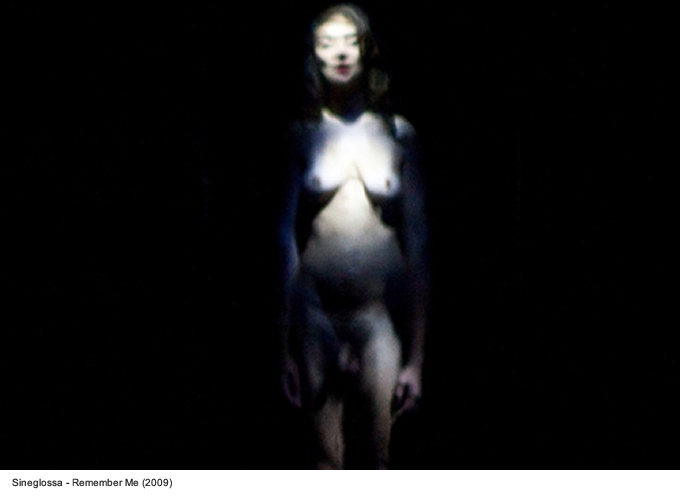 Massimo Schiavoni: What does it mean for Sineglossa to be contemporary?

Federico Bomba:Probably it means to politically deal with daily emergencies. Working in financial hardship, considering other routes of exposure than the most obvious ones through festivals, catching the largest number of viewers without reducing the metaphorical level, being sure that there is still a big room for wonder in the everyday life. Our challenge to contemporary is being popular without giving up to the more traditional narrative, which even manages to achieve moments of excellence but remains bound to a vision of the human beings often foregone and harmful, because sitting on ancient beliefs. We believe the contemporary drama can find an unexpected way, yet unknown, that we will look for in the next years.