The Cognition Of Gesture. Composition By Wayne Mcgregor 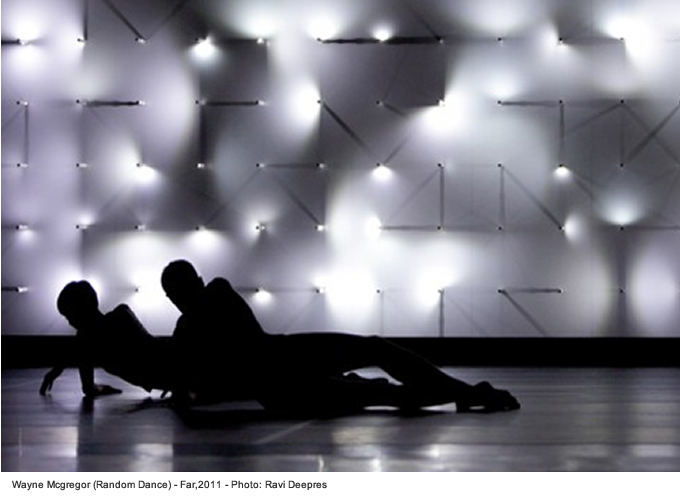 Perception and movement are the base upon which English choreograph Wayne McGregor founded all of his work. In 1992, when he was only 22 years old, he founded Random Dance Company, taking it to an international level by means of a radical exploration of the relation between dance and technology, and collaborating with multidisciplinary artists in the realization of works that widely contribute in making his company one of the best British reality of the dance panorama.

Wayne McGregor received commissions by Royal Ballet and Rambert Dance Company, realized the choreographies of Woman in White, a Andrew Lloyd Webber’s musical, made site specific installations for Hayward Gallery, Canary Wharf, Centre Pompidou, and has been director and choreographer of Dido and Aeneas by Henry Purcell at Teatro alla Scala, a work that was re-edited at Royal Opera House along with Acis and Galatea, another piece he directed and choreographed.

In 2004, after he composed Ataxia, he started a project that still marks his choreographic career: his research on perception. In 2008 he collaborated with cognitivist scientists for Entity, in a theoretical-practical elaboration on the identification of kinesthetic intelligence, deconstructing it anew with a series of technological inputs. In 2006 he has been elected the first president of the Royal Ballet in 16 years, and the only one coming from the world of modern dance. His works has been presented at the best international exhibitions. 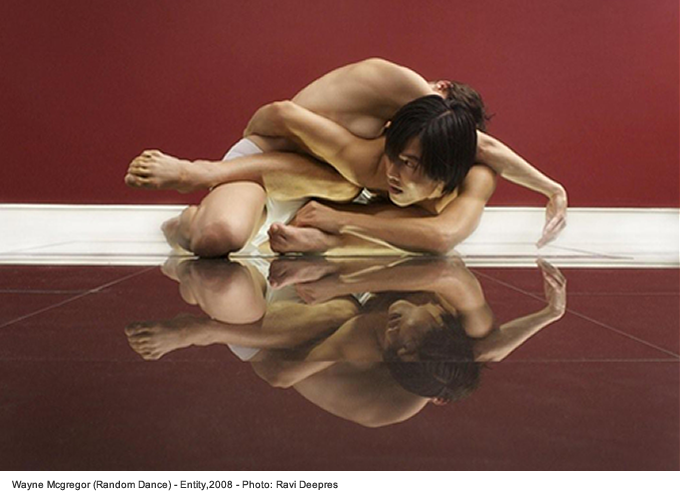 Wayne McGregor is currently working on the composition of L’anatomie de la sensation for Opera de Paris that will make its debut in June.

An anatomy of sensation is just what he shows in every work. From Ataxia (2004) till FAR (2011), going through Entity (2008), a logic of movement is analyzed on the basis of a logic-formal and compositional idea – almost an epistemology of gesture, we may say – the deconstruction of the formal asset of body and its reorganization.

In detail, the inspiration for FAR comes from Flesh and the Age of Reason, by Roy Porter. It is a story about exploration of body and soul in the XVIII century, an age of great discoveries in medicine and anatomy and many radical philosophical questions about the mechanisms of thoughts and emotions. All these ideas and concepts establish a direct relation with McGregor’s work, with particular attention to his collaboration with cognitivist scientists. The body here is put under a microscope, in order to better understand the processes through the movement that defines itself to create an action.

FAR is the result of a complex research, carried out in collaboration with Random Dance dancers on the original music by Ben Frost,- a leading figure in World electronic music – highly evocative light architectures by Lucy Carter and a setting by Random International.

The compositional structure takes its form from the interception of these aspects, utilizing polyphonic and punctiform sequences – duos, solos or trios in synchronization, starting from an unpredictable and prismatic object – prolonging and cutting space by different geometrical figures and volumes. 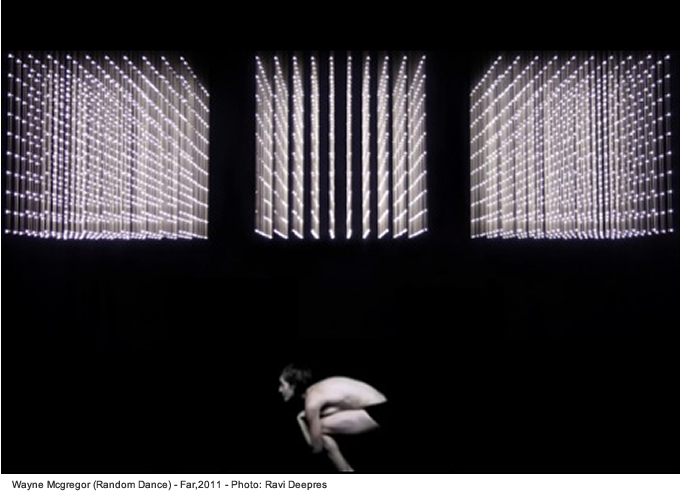 A similar architectonic construction even touches Ben Frost’s sound composition: a series of acoustic wounds cut the setting space as if they were arrows that – always metaphorically speaking – seem to open and prolong bodies, under a sound shape, by revolting them on the scene. In this way we experience the elaboration of a veritable sound body which rethinks sound in its material concreteness: crackling and screech, and a series of sequences fill the air and establish a direct relation with bodies, in the same direction or opposing to them.

Sound creates the atmosphere that determines the temperature of the scene. Moreover, it is a temperature that turns into logic of colour thanks to a brilliant intervention by Lucy Carter, who sees light as a matter investing and sculpturing body in movement by bestowing a kinetic aspect upon it: this logic of colour is actually a hand lens aiming and exploring – as if it was in a tactile dimension – the dancers’ body: it runs through the bends, focusing on the uncommon architectural structure. In other words we may say light, in FAR, makes the bodies visible, reveals their animal dynamic – how closely these figures seem to remind us of Francis Bacon’s thoughts – and they imprint on the observer’s retina, as they would do on a photosensitive plate.

So the research on movement in FAR (2011) reveals a radical elaboration on the connection between brain and movement. It seems to conceive brain as a simulator of the external world. In this context, the brain casts on the world its hypothesis of action and uses the information obtained from senses – like sight, hearing and olfaction, just to mention some of them – as feedback to control the coherence of its predictions. In other words, the body relies on the real world in order to control and embody its predictions.

Since the Entity project, McGregor’s work makes use of technologies – the programming of intelligent choreographic agents by utilizing AI algorithms – to develop autonomous choreographic sequences, capable of supporting both the choreograph and the dancers during the elaboration of uncommon scores. In plain words, technologies intervene on the imaginative faculties (fiction), thus modifying the performer’s scheme of movement. This research on the relationships between brain functioning and composition of movement – with the support of technology too – leads to an opened choreographic structure, founded on the principle of disarticulation of body expressing, as aforementioned, in solos and duos. 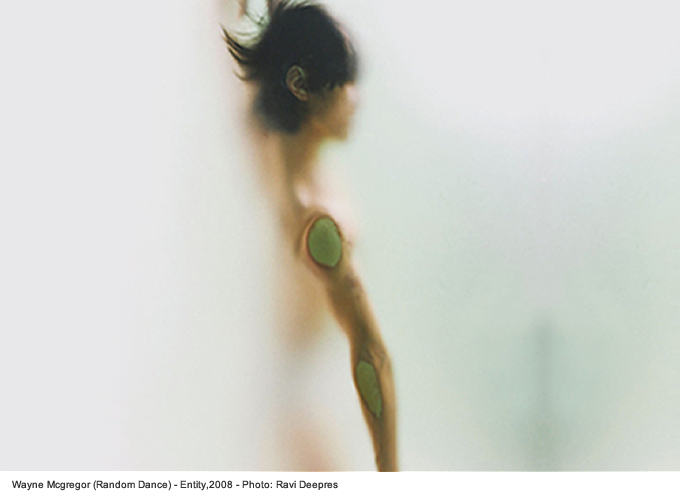 And here McGregor’s conception comes into play, by analyzing and selecting the physiologic and cognitive mechanisms which lie at the base of movement: he investigates the way they influence choreographic procedures. It is all about compositional strategies that make bodues literally blow up, recalling into question their morphological asset in favour of an exploration of its trajectories into space. It looks like each of the dancers is dismantling their movement in the very moment they make it, and every part of their body is articulated and aimed towards an unexpected trajectory.

Moreover, this principle reverberates in the general structure of choreography. McGregor works towards a scientific research which finds its way in a fluid, instinctive and visceral movement body. It is a calligraphic writing that requires steel legs to support pelvis and arms that seem decomposable in the end. We are talking once again about a total deconstruction of body and movement, a syncopated yet disarticulated and fluid process of gesture: a nervous yet controlled fluidity.

FAR is a step closer to an evolution that forces us to face new and uncommon modes of composing gestures, deriving from the elaboration of a precise strategy of perception renovation: according to McGregor, to renovate perceptions means to alter ways, colours, temperatures and intensity through which first simulation and then execution of gesture are structured. It looks like the choreograph claims it is necessary to imagine oneself in another way, to move the body in another way, in order to change movement and reach an epistemology of gesture.

So, reorganizing perception, as shown by McGregor and his dancers in FAR, means finding new strategies to provide the brain with a new stimulus for it to elaborate on new hypotheses of movement, anatomic configurations, spatial trajectories, and subsequently, new forms. On the other hand, the problems in virtualizing – that is to imagine space, characterizing it and making it dynamic by projecting uncommon hypothesis of movement – comes from the application – always the same – of the gesture composition schemes. It’s all about avoiding a sclerosis of movement. 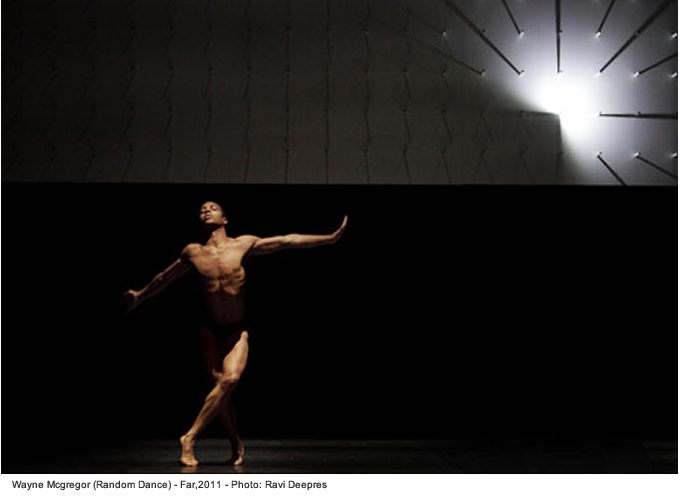 In other words, the body in FAR is subject to a veritable destructuring and formal recomposition process. Its anatomy appears as it is re-made. In the absolutely concrete images deformed by McGregor’s work, Spinoza’s thoughts seem to rise in all its radicalism. The philosopher conceived body as a relation of vectors, velocity and slowness, movement and rest. The dancers’ bodies have exactly this paramorphic architecture – for their morphology is in constant variation – that rethinks and redefines itself under the spectators’ eyes

Wayne McGregor seems to suggest that composition leads to the creation of a counter-intuitive, never predictable body, capable of remaining impressed onto the observer’s emotional (and muscle) memory.