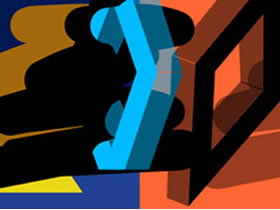 MOMO is an artist whose work is not easy to catalogue. Defining it as a street artist would be boring and reduced. His life and his adventures are surprising as his experiments and they don’t deserve being limited within no definition.

Disembarked from Brooklyn after several years of wandering, they’ve seen him moving in Jamaica, Spain, New Orleans, Key West, Taos, Georgia and North Carolina, living in tents, caverns and barracks. MOMO is a Californian artist, for this reason the labels are useless. His essential and at the same time original and coloristic style makes his works recognizable at first sight.

Curious and relentless, he has experimented all in its path, from writing in poster art to realistic picturing in digital art. In 2006, he has tagged the entire length of Manhattan by a MOMO label of two miles and with Eltono installed a series of mechanic sculptures on the beaches and water of Manhattan, filled the city with the covers of New Yorker, constructed a sculpture of spandex for the Spring Street Show and coloured the streets of many world cities with his collages. Momo has exhibited his work in New York, Seoul, Cologne, Manchester, New Orleans and collaborates in a stable manner with artists such as Melissa Brown, Jimmy Debuffet and Eltono and which affirms his inspirational source as Sam3, Influenza, Zosen, Sonik and Blu.

A strong tie connects him to Madrid, where we have interviewed him in the occasion of his Underwater exposition in which he presented the latest evolution of the MOMOMAKER, a web page which is also a mini software that plays with graphics, randomly binding a series of geometric forms together and giving light to a series of experiments which take absolutely unconventional form in serigraphy.

Silvia Bianchi: First of all where and when was born MOMO?

MOMO: In the San Francisco Bay, California, in the mid 70’s.

Silvia Bianchi: Your style is so clear that in the same time it’s so complete, it seems as a result of coloristic balancing and plastic rhythm. Is it a result of a stylistic progress starting from realism?

MOMO: Progress! sure.  I spent the first 15 years of my life learning to draw and paint well.  I some of that seems like a waste, except its great to practice looking and studying.  Now I’m chasing experiments that I believe continue to look farther.

Silvia Bianchi: How the metropolitan context and support influence your work? I’ve read that in order to realize the MOMOMAKER you’ve started from observation of the scratchings. Can you explain exactly how the idea was born?

MOMO: It began as a joke, just to say a computer was making my artwork, and I can relax. But it became true, I’d discovered a tool, and I’m still interested in it a year and a half later.  The MOMO Maker combines elements randomly and they look good or they don’t.  Generally a design is exciting when there are dynamic contrasts between elements.  There becomes a little story of what happens when, for example; hard enters soft, lite covers heavy, heavy rests uneasily on sharp, etc.

One day I recognized that graffiti over graffiti has this special need to make dynamic contrast, to be seen at all.  That idea really blew me away.  You see it best in scratchiti because its all transparent (on glass).  Thick lines might overcome thin, Straight over graceful, jagged over straight, etc.  So the the same thing is at work- and what is that? Vandalism is only vandalism, when its different than what was there (you can’t vandalize anything with more of the same).  This appears to be everywhere really. In a spiritual sense I’m taking on faith that its natural and beautiful.

Silvia Bianchi: I am very interested in the type of technique, which you use to print your designs. Are your printings, serigraphy? or do you use an overhead projector aren’t you?

MOMO: When printing very large posters I cut black paper for the shapes.  The seriograph comes directly from the shadow of the scissor cut paper.  For the latest series I printed the forms from photoshop onto transparency to make the shadow (that’s the normal seriograph process).  I wanted it directly from the computer files so we can say the ‘Maker animation performed a real test of possibilities, before ink hit the paper.  In the past there are so many handmade variations in the printing, that you could only say the “Maker was inspiration.

So the squeegee leaves an unpredictable part to the result? For this latest project there’s 3 shapes per design, and 27 shapes: 19,683 possibilities.  I printed just 1000 of them (well 1300, to discard the worst and doubles). So there was randomness of “1000 within 19683”.  I certainly had not seen most of the artwork I was going to create before it happened.  I didn’t think of it, it was discovered (!).

Silvia Bianchi: Would you describe us the various phases of your work?

MOMO: Pretty basic – catalogue favorite shapes and colors. Use several java script random slide shows on top of each other (on

layers) to combine your favorites.  Watch.  Change things that don’t work, like the order on layers, position, proportions of large to small, filled to half filled.  Now make your seriograph. I have my own interests and rules for what I’m looking for – such as; each shape should try to be as much itself as possible.  Once I find them, the shapes don’t change like swirling 80’s patterns (of floating geometric bits & triangles) only the contrasts change.  Colors, positions, orientations, and sizes for each shape is pursued seriously, so I find it and keep it.  But that’s just me.  I think this multi-slide show MOMO Maker could have other applications for other users.

I very much want to work with someone that writes code for real, to write the easiest cleanest version of the online ‘Maker.  There’s three or four scripts that I’ve used, but none do it all.

Silvia Bianchi: You’ve approached various means of expression in your work: from sculpture to drawing until aerosol. The MOMO maker is the first of u’re works  to involve the use of computer in your art?

Silvia Bianchi: I am very fascinated by seeing that the use of computer in your work is very instrumental and not substantial. Your work is very analogical and seems like organic but at the same time it has something digital. It’s as if you had organisized a graphics of digital origin valuing the part of unexpected result, which we graphic designers are not used to seeing. Can we say that for you’re the computer is an aid?

MOMO: I actually went to college for “computer art” – isn’t that funny?  I was extremely interested but then turned off at the same time.  I dropped out after a year. I guessed I could spend 3 years learning something that would become obsolete, or I could lean core art stuff, and apply it when computers became easier to  use.  Of course that was 95, and immediately I missed the internet bubble that was forming, and all the money and rock and roll (I really fucked up haha).  In the fine art sense artists occasionally receive attention for demonstrating new technology, but of course its better to chase something substantive.  You don’t want to loose the forest in the trees.  I think the MOMO Maker is a really fun invention,  but like most tech, I’m half in, half out.  You could do these experiments other ways, its just faster and reliable and accessible like this

Silvia Bianchi: At Subaquatica you have exhibited 1000-printed serigraphy made by the MOMOMAKER, underwater. Do you have any ideas of how to present the project in the future?

MOMO: Yeah, every time I try to finish the MOMO Maker project, I end up with more questions.  I’d like to experiment one more time, with 3-d looking shapes and shadows.  That will have to wait, until maybe next year, I’m booked already for a while.

Silvia Bianchi: What are the next projects, which you will work on?

MOMO: I can’t mention most of these things.  Some are not 100% certain, but I hope to travel to a handful of countries this year, making video based street experiments, I’ll have a show with Rojo in Barcelona in June, Something with Paper Monster in April, I’m really into zines (if I can find anytime).  I hope to work with some friends of mine on things, some experiments and jokes in NYC.  Right now I’m working my day job in Hawaii while it snows in NY.  That’s a project called survival (!), I hope to do some 5 day sailing off Key West Florida with a friend who built his own sailboat!.