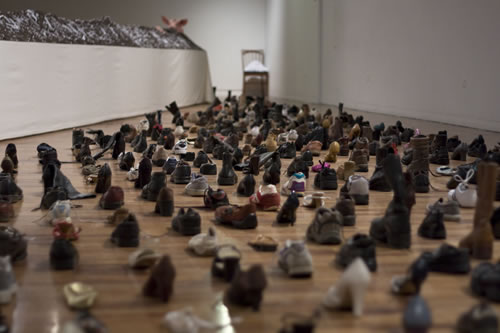 For about 2 weeks, between last July 3 & 19, the Manchester International Festival commissioned and produced the performance Marina Abramovic presents..., created by the Serbian artists especially for the festival. For the performance, the spaces of Whitworth Gallery in Manchester were completely emptied of all arts pieces, and put at the performance artist’s disposal, event almost unique in the contemporary art’s world.

Born in 1946 in Belgrade, Marina Abramovic started her career in the 1960’s as a painter, and later, by the beginning of 1970’s, transitions to performance art. From her debut it was evident the desire she had to communicate directly with the audience by creating a synergy, which is a fundamental element to the success of her performances. Her early works were characterized by extreme dangerous and violent rehearsals, through which Abramovic pushes to the extreme her mental and physical limits, by reaching a trance status which prescinds from her consciousness of pain.

An example is the cycle of 10 performances titled Rhythm’, during which the artist, through the use of knives and other torture devices repeatedly risks her life . The intermediate phase of Abramovic’s career, sees a collaboration with artist Ulay (Uwe Laysiepen) and ends in 1989 with the final project “The Great walk”, a 90-days walk on the Chinese Wall. Her latest works are characterized by a search for purification and mystic introspection, connected to her studies on Shamanism, Tibetan Buddhism, and Tantric and Sufi philosophies. A constant in Abramovic’s works, which we can see in the various phases of her artistic evolution, is the energy that arises from the interaction between artist and public, transforming the audience into a participant element, and not a mere spectator.

Marina Abramovic Presents… begins at 7 pm and lasts 4 hours; the public is expressly requested to stay until the end of the event. At the entrance of Whitworth Gallery, us spectators (about 250) are invited to wear a white lab gown: time stops, the experiment begins. We are then taken to an enormous room in the gallery and take place on small stools, the atmosphere is pervaded by a common anxiety and tension.

The first part of the performance, The Drill’ consists in an 1-hour long de-programming and re-programming of the audience by Abramovic, who in this occasion takes on the role of shaman, and starts with having us drink very slow a glass of water. Through a series of exercises for relaxation and concentration, the artist, undoubtedly endowed with a magnetic charisma, prepares us to face as best as we can the remaining 3 hours, which will consist of 14 performances of the artists displaced in the various rooms of the Withworth gallery.

At this point, we are free to explore, attend, participate. The performance by Irish artist Kira O’Reilly, was the one which interested me the most. Kira slowly falls from a staircase, naked but a pair of driver’s gloves, in silence, controlling her gestures up to making her movements almost imperceptible. Italian artist Nico Vascellari, in a cupboard, repeatedly hits 2 huge stones, producing a constant and violent sound which becomes an obsessive, disturbing, almost apocalyptic loop, which accompanies us until the exit of the gallery. Ivan Civic with Back to Sarajevo …After 10 Years… goes ideally back to his hometown by climbing on a wall where scenes of the city, excerpts from interviews to people who aren’t there anymore, are projected; a kind of visual diary which tells the story of a Sarajevo on war.

Irish Amanda Coogan, throws herself repeatedly on a huge mattress, screaming and groaning in ecstasy as if she was possessed by demons. Scottish Alastair MacLennan creates an installation with shoes of any kind and size arranged on the floor, and an enormous table covered with earth, paper, cotton thread and the head of a pig divided into 2 parts. Russian Fedor Pavlov-Andreevich, of whom we can see only the mouth, asks the members of the audience to feed him, give him something to drink, or to engage in other actions through a small window, The Glory Hole; and for those who do not comply with his requests, there are unpleasant consequences.

These are just examples of what happens during the “experiment”, naturally the artistic value of some performances is highly questionable, but the event in its whole is undoubtedly a unique and unforgettable experience, that takes the spectator in the middle of performance art, overcoming the distance between artist and audience. Paradoxically, after the 4 hours spent inside the gallery (where time, actions and space dilate), once we strip off the lab gown and take back our identities, the routine of everyday actions becomes quite surreal.