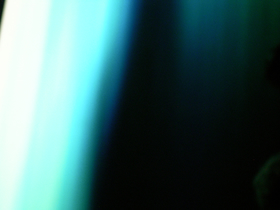 Here comes another chapter of the series of interviews dedicated to the most interesting representatives of Sonic Acts latest edition (Amsterdam, February 21st  24th), which we started in March with a long virtual conversation with Ken Jacobs. (“Jacobs: il demiurgo dell’immagine in movimento” di Alessio Galbiati e Paola Catò  Digimag32/marzo08).

This time is Ulf Langheinrich‘s turn, “a contemporary artist who has always struggled for a production aimed at reaching an emotive and effective unicuum”. (this definition comes from Mixedmedia Milan festival 2006 online pages, from Audiovisual Art section crated by Marco Mancuso).

Born in 1960 in Wolfen (Eastern Germany) he lives and works between Vienna (Austria) and Accra (Ghana). Leaving the land of real socialism, in the middle of the ’80s he moves to the western part of his country, having already had a varied education which included (compulsory) military service and the fundaments of industrial design, painting and music. The experiences with Eberhard von der Erde in painting as well as his experiments on unusual musical instruments such as organs and the harmonium played a very important role. He soon develops a study on electronic music starting from his own musical language.

In 1988 he moves to Vienna, to the WUK (Werkstätten und Kulturhaus), where he is given a flat to develop his research. Between 1988 and 1991 he mainly dedicates himself to painting, being featured in many exhibitions and having a personal exhibition at Vienna’s Kunsthalle Exnergasse, whose catalogue can still be found wandering on the web. These years witness the growth of Ulf Langheinrich’s creativity, the will to increasingly cross borders among artistic disciplines finds its expression in the usage of photographic works and images in motion; soundtracks and soundscapes for installations are part of his production during these years.

At the beginning of the ’90s Langheinrich is involved in the creation of the multimedia group PYRAMEDIA, as well as in the coordination of the independent project WUK. In 1991, together with Kurt Hentschläger, he founds the collective GRANULAR SYNSTHESIS (Digimag n. 03, April 2005, includes an article about it: “Sintesi granulare e universo percettivo”, by Isabella Depanis), one of the most important international groups in the field of audio/video experimentation, which over the last 20 years has produced several films and installations.

Their works have found space in almost every country of the World (Italy included), from the Museum of Applied Arts in Vienna to the Contemporary Art Museums in Lyon, Montreal and Seoul, from Stedelijk Museum to Hannover’s Kunstverein, Montreal’s ISEA, Tokyo’s ICC, New York’s Creative Time and the Austrian Pavillion in Venice’s 2001 Biennale. Many GRANULAR SYNTHESIS works have been published on DVD, among these REMIX/INDEX (Austria) and IMMERSIVE WORKS (ZKM/Cantz). Langheinrich has produced a CD, DEGREES OF AMNESIA (1998), and from 2003 he has developed other solo projects. He was a visiting professor at the HGB University for Graphics and Book design in Leipzig and has held several lectures at the Multimedia department of Salzburg’s FH. The 2005 edition of Ars Electronica featured a retrospective on his works and in 2006 he held a series of lessons at Melbourne’s RMIT.

This short biography aims at giving some hints about an artist who could only be better known through the fruition of his works, which bring the spectator into an immersive dimension beyond reality.

Alessio Galbiati e Paola Catò: Can you introduce the topic of the conference held at Amsterdam’s Sonic Acts, starting from its title: “Interference Moments”?

Ulf Langheinrich: I was emphasizing on a number of my own artistic strategies in connection with the above stated topic. By introducing examples of quite early sound experiments in contrast to the presented installation I intended to give a better understanding of the core motives behind my artistic work.

Alessio Galbiati e Paola Catò: Last February at Sonic Acts, you presented 3 artworks: “Drift”, “OSC” and “Soil”. Do you want to speak about them?

Ulf Langheinrich: DRIFT is a film while SOIL and OSC are installations. SOIL is already a few years old and based on found material. It deals with the idea of extracting essence and transform it into something new. OSC is based on an algorithmically generated still image that has become transformed into a multilayer image stream in 60 hz real image replacement. This is layered and overlaid with other light patterns in order to focus on sub-patterns that would otherwise stay invisible to a slow sensory system.

About all work I could say that I approach sound and image as a space, a resonating matrix for an aesthetic matter. This matter realises itself as parallel streams of sonic and light projections. The specifications of those interfaces significantly determine the immediate sensory impact, thus, the audiences encounter with the matter.

There are multiple parallel spatial and temporal layers that constantly reform through processing that alters the consistency, viscosity and transparency. Each layer is pulsating energy in sync and out of sync to others, in phase or in phase shift, fields of oscillating energy, sometimes clustered into one vibration. The permeation, stacking and re-visualisation of these layers results in visual qualities of symphonic noise permutations or as aseptic, pure, at times even emptiness.

Generally there are no specific objects or movements, there may be mirrored movements like a continuous flow from top to bottom and slightly different from bottom to top. The absence of signs, gestures or objects in the apparently dimensionless audiovisual meta-movement evokes the notion of primal and total aesthetic matter resulting in a hypnotic audiovisual space. Such a situation is contrary to how a viewer seeks to track and observe elements of a plot, a sense, a meaning. The sound-image flow arrives gradually, generating a delicate and subtle tension.

The visual space opens and closes, from surface to deep space and back to just pure screen and light appearing as an inverted illusion. The unavailing fascinated look onto a resonant matrix builds to an immersive deep glow.

Direct sensual impact is first of all achieved by precision and high resolution and gives way to an awareness of and excitement about minimal shifts. An important aspect is that certain shifts and oscillating movements occur outside of the actual displayed images. They are sensations resulting as interference between the perceptive and processing potential of the eye- brain- apparatus and specific modulations of resolution of the projected material in time and projection-space. These interference movements are not simply OP-Art related side artefacts but are the central focus of these works and their characteristics are designed over time.

It is the exclusion of computer aided interactivity that activates and empowers the viewer’s sensitivities releasing them from the promise of navigation and allowing them to accept the internalisation of their activity as viewers, or experiences. This active viewer will however not embark onto a playful or intellectual or emotional narrative structure; but just seeing feeling and being in the present and now.

Since the membrane of the projection area is constantly presented to the viewer in hyper-realistic synthetic waves, they are propelled into a constant contradictory perceptive situation: He is confronted with a minimal and strict aesthetic statement that demands and rewards for concentration and awareness of subtle drifts. At the same time the viewer finds himself in unsettling sensory overload.

Alessio Galbiati e Paola Catò: The sound is a primary element in your works. How do you define your creative relationship with it?

Ulf Langheinrich: Much like in the visual aspects sound changes happen on a general level, as reformations of all sonic layers. This loaded and fluid sonic texture may be considered analogue to the sonic situation inside a small aircraft during descent. The general appearance of the sonic image is massive, invasive and surround: Subtle differences in speed between turbines result in rich interferences phase shift, drifting rhythmical phenomena and shifting resonance response to shifting sonic energy.

Due to the impact of the sonic and subsonic sound the virtual space gains immediacy however, its proximity and tension and the impact that the sound and flicker have on the physical body, feeling the sound through your core, takes it away from the virtual and makes it a direct external and internal physical experience: that is what I intend.

Ulf Langheinrich: No I don’t think so, as a general statement, however many of my own experiences proof that statement wrong. Perception is eventually something you learn. Improving the “processing” of sensory information and understanding its information is training, and today it obviously is training with digitally generated material and digitally
controlled presentation environments. This first of all applies to audible and visual information.

Alessio Galbiati e Paola Catò: Looking at the technical specifications of your works we get the impression of a hypothetical reproducibility. It seems an application of Walter Benjamin’s “The Work of Art in the Age of Mechanical Reproduction”. Can we say that mechanical or technological reproduction has become art itself?

Ulf Langheinrich: It is the very nature of many art productions that are based and dealing with media that are reproducible, to be have reproducibility as a core quality in it self. It is the art market that sometimes demands for an artificially established singularity of a product while the actual physical object is all but unique as an object. But I wouldn’t go as far as to call technological reproduction an art in itself. The art is to create work in awareness of the nature of the medium and to investigate it.

Alessio Galbiati e Paola Catò: Did you browse through the Sonic Acts programme? Were there any artists or moments which you found particularly close to you, your life and activities or you could draw inspiration from?

Ulf Langheinrich: Since I had only limited time to see other work and consequently have not seen as much as I would like to have seen, I hesitate to make any specific statements here.

Alessio Galbiati e Paola Catò: Thank you for being our guest and having answered these questions. Do you have a suggestion on “where to go next” as far as this series of interviews dedicated to Sonic Acts XII i s concerned?courtesy by Ulf Langheinrich

Ulf Langheinrich: I believe kurt hentschlager and TEZ would be inspiring partners for an interview which maybe also tells you a bit of what I liked at sonic acts.