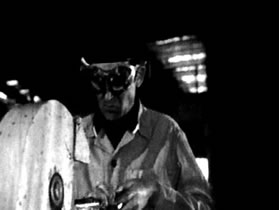 They say the purpose of their work is rhythm, the passing of time and its deep relationship with the flux of images, texts and sounds collected from the Internet, which is seen as an enormous hard disk, an infinite database free from authorial limits and so available for creative re-interpretation of its contents and for a free from territorial limits and geographical barriers redistribution of creativity and knowledge. Nothing new, these are theories and concepts internet and new media philosophers and theorists have stated a lot of times, but that are not easy to put into practice.

This is the difference of Mutaforma project. I talked with the two members of Mutaforma project to better understand the concept of Collective Intelligence and figure their modus operandi out. That is, how they take internet files to mix up the contents to create their project and how they use the dynamics of the Internet to spread and redistribute these contents.

Beatrice Ferrario: you use internet files to ex post manipulate to create your artistic performances. What are your purposes? Have you got a muse?

Mutaforma: we are basically involved in audio and video and we try to experiment or freely express our emotions. We don’t have a specific purpose, we start from an idea but during the building up of the project we can completely alter the nature of this idea.

For the C.I. project we took inspiration from Pierre Lévy’s homonymic book which looks at digital revolution as a possibility to enlarge knowledge through sharing. Geographic distances are annulated by virtual communities putting at everyone’s disposal their competences.

Mutaforma: The internet is a huge database everyone can take some part of data away. In our case we exploited the potentialities of the Net to artistically re-elaborate files which were born with other purposes. Almost nothing has strict and precise boundaries but thanks to the binary code you can manipulate and re-categorize everything.

Beatrice Ferrario: On your web site there’s the introduction to project video whose title “Man and Machine” suggests a cyborg universe. How did you build it up?

Mutaforma: Our passion is also our work, actually we have a production studio of audiovisual and multimedia. This project doesn’t include files taken from the Internet. The cyborg idea is well-designed to introduce the C.I. project theme Man and Machine. You can freely download ending videos and manipulate them. As a matter of fact we want our project to go on and we hope people accept the inducement to manipulate Man and Machine videos and all C.I. videos.

Beatrice Ferrario: Creative Commons licence is the symbol of file sharing philosophy and prerequisite to give others the possibility to use your creations. Is this collective intelligence?

Mutaforma: C.I. has a Creative Commons licence but we don’t have a licence for all our works, it depends on the purpose we create them. Our project is constantly changing, mutable. The concepts of sharing, freedom of expression, and the right to manipulate represent collective intelligence because they create knowledge and common knowledge. There’re no more cultural differences because everyone can give his contribution to the virtual community growth.

Beatrice Ferrario: According to your point of view there’s a medley between artist and hacker. They seem to be superimposed in a net art project. Can you tell me how?

Mutaforma: The whole symbolic universe was sensitively influenced by digital techniques that has been re-writing values and cultural aspects of the artistic event. The binary system conferred the same substance to different ways of communication and legitimated the representation of visual thought and the manipulation of languages which were far away from each others before. The medley between artist and hacker is the conception of a new material shaper that collects and re-uses codes inserting his references and symbols.

The continuous echo of signs recalling images, experiences, and knowledge produces a bewilderment between the original work and its re-elaborated clones. The uniqueness is lost in favour of an infinite semiotic amalgam. The hacker artist is aware of the continuous changing, of the fact his inspiration is made up of the combination of thousand of thoughts and images, which are the re-elaboration of something. The hacker artist has to propose new solutions experimenting language medley. He has to manipulate binary data, violate the rules and share his experiences in favour of a common knowledge.