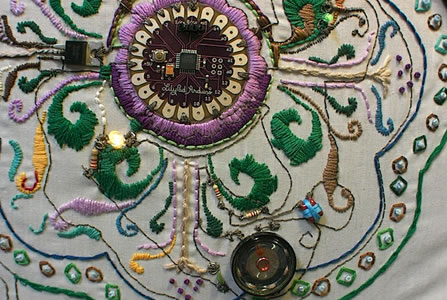 This major exhibition at BildMuseet brings together individual and collectively made artworks by artists, makers, computer programmers and html users that explore the relationship between craft and code through social and digital networks. The works experiment with interdisciplinary approaches to modifying patterns, the DIY culture of hacking and sampling in sound, GPS and mobile technologies.

The history of computing as craft began with the Jacquard Loom (1801), the first programmed machine which used binary punch cards to design woven patterns. The loom inspired Charles Babbage in his design of the Analytical Engine, often described as the precursor to the modern computer.

Flare Productions’ documentary film about Ada Byron Lovelace To Dream Tomorrow (2003) highlights the significance of her extensive notes about the Analytical Engine, and her insight into the potential of the machine to operate not just as a calculator of numbers but also as a computer of symbols and information. 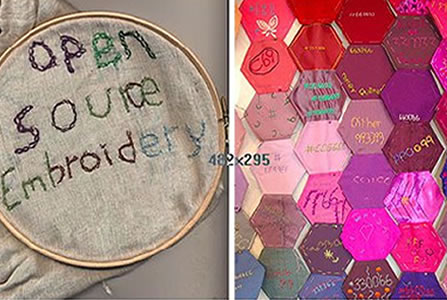 Richard Hamilton also featured Ada Lovelace in a poster campaign to save free public entry for the South Kensington Museums in London (1998). Issues of access to code and culture are still pertinent questions of our time.

Using open source software Hamilton, Southern & St Amand are facilitating a new production of Running Stitch creating a map of Umeå. Visitors to the exhibition are invited to take a GPS walk around the city and sew their paths onto a giant canvas in the gallery. The activity will take place June 6 and 7 and every Sunday until September 6.

Open Source Embroidery is curated by Ele Carpenter, HUMlab Research Fellow in partnership with BildMuseet. The exhibition has been developed by BildMuseet and the Museum of Craft and Folk Art, San Francisco, and supported by Arts Council England and Canada Council.