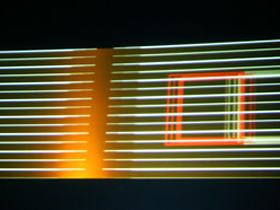 TeZ is Maurizio Martinucci ‘s stage name. He was originally a musician and he became then a 360° media artist thanks to his creative inclination. TeZ is not famous in Italy yet, but he’s considered one of the most complete and versatile electronic artist abroad.

It’s not easy to give a plain definition of his work. It’s almost impossible to visualize it for the ones, insiders or not, that don’t understand the crossover potentialities of new electronic arts and the fact it’s not always necessary to define the level of meta-language electronic arts naturally create. We should be proud one of the most aware meta-artist of this period is Italian and we shouldn’t let these artists forcedly emigrate in the direction of Amsterdam and Holland digital channels.

TeZ is above all a musician. He has been working with electronic music for years and he has collaborated with famous artists such as Kim Cascone, Taylor Deupree and Scanner . But TeZ is also a sound artist. He’s interested in the technique and expressive potentialities of the 5+1 system and in acousmatic too. TeZ is a video artist, an experimental director, a video-clip author and a graphic designer at the same time. In a word TeZ is an audiovisual performer in the literary sense of this term, an aware researcher of the use of these expressive instruments possible synaesthesia. Maurizio Martinucci is also a generative artist. He’s an independent producer of codes and software to real time generate audiovisual products to enjoy by means of installations or to live manage on the stage.

This and much more  is TeZ: he’s a subtle theorist and an explorer of new boundaries on the non use of random parameters in generative art and on the possibility for sounds and images to self generate starting from their intrinsic values. He prefigures new expressive languages with his Generative Live Cinema (GLC), Scanner ‘s video stooge in the Blindscape project presented as a world première at the Electronic Night at the Rome Europe Festival 2005 , one of the most effective and emotionally involving audiovisual lives I’ve ever seen. The following part of this article is the result of a chat I had with TeZ on that occasion. I think it reveals the purpose of Digicult, which is the real and not only theoretic comprehension of the possibility for an individual to start a meta and transversal dialogue between arts and disciplines.

MK: Can you talk me about you, your work and your artistic inclination? Can you explain me how the collaboration with Scanner started?

TeZ: I met Scanner fifteen years ago. Coil gave me a list of contacts because I wanted to get some of the material they produced and Scanner was their experimental art events producer. So we met. Scanner was becoming famous and I was starting to work with music and video so we started to think of making up a project. I usually work on software and on the concept of integration between music and video and now I’m working on a Generative Live Cinema (GLC) project to real time manage my lives and the audiovisual integration. I’ve been theoretically and practically working on generative art for three years starting from Protoquadro, a generative digital painting project, which is now economically supported by some people in Holland.

MK: Can you talk me about the Sub Multimedia Research Lab you set up some years ago in Rome ?

TeZ: yes you’re right, I actually set up a laboratory in Rome called Sub Multimedia Research Lab , and there as years went I’ve been working with almost 30 people. Federico Bonelli and I have been the hinge of this laboratory since 1999 and we decided to leave Italy because we couldn’t find some financial help to start a creative and artistic research project. We usually work on three levels: the writing of self-contained software, the work on sound, imagines and text integration and finally real time generation connections among these digital media. The Lab is now formed by 6 persons working together on specific projects: two of them live in Amsterdam , two of them in Paris and the last two persons decided to stay in Rome.

MK: Blindscape, the project Scanner and you are presenting tonight, is a world première. Can you talk me about your artistic vein astride audio and video?

TeZ: Blinscape is a world première and it’s the first time we appear together. I’ve been working chiefly on the image and video composition for the last five years, even if my background is largely a musical one. To give a visual character to my electronic lives it was necessary to work on images. This led me to the writing of my own software I called Trivid I’m still using in a different way. Every software I subsequently wrote derive from Trivid included the one I’m presenting tonight Generative Live Cinema (GLC), which is the core of a very clear-cut idea of generative art and live expression. Working with Scanner was very odd because we are both involved in music and images and for that we have a lot of affinities even if I’m more visual skilled while he’s more audio skilled. So he was the one who proposed me to give a visual composition to the sounds of bats he recorded with special radar. Our project is an open one and it’s already changing. We think of turning it into a DVD and we want to work together on the audio and visual level to have the possibility to confront ourselves.

MK: You worked with Kim Cascone and Taylor Deupree, who are music and sound researcher. How much are you fascinated by sound art concept and the idea of giving sound the effect of space?

TeZ: As I was saying I’m coming back working on the sound, mainly on giving sound the effect of space. I’m looking for an effective use of 5+1 system and I’m exploring out of the ordinary uses of it. Plus I’m still involved in the VillaLogicaSonora project presented at an Amsterdam ‘s square and managed through a joystick and software I wrote. Finally I’m working out with Kim Cascone some projects focused on the acousmatic concept and the idea of giving sound the effect of space.

MK: Can you explain how could you put together this artistic approach with the generative cinema concept you was talking about before? Last Transemediale edition coined a neologism “Live Cinema”. What in your opinion do this new word really mean and how can some project there presented be included in this category?

TeZ: I’m working a lot on my generative audiovisual projects, video and music real time put together. I’m sure there’s some misunderstanding on the use of new terms and my project is in this sense a little bit provoking; In Holland I’ve seen many works belonging to the so-called Live Cinema and at first I thought it was a good way to presents some live projects as they were a cinematographic product. Actually no one of the projects I’ve seen is really a cinematographic product because they include no narrative. So I decided to create my instrument/software to live and real time gain a series of visual and sound effects that could make use of a visual element that can lead back reality as we know it to make a more comprehensive, emotional and (so) cinematic work. Today we don’t use digital significance potentialities to connect it to something beyond digital itself. Something we normally see and observe.

MK: How is the concept of generative art included in this process? One of the concepts of this creative universe is connected to the ability of laying hands on code as it were a real artistic inclination, waiting for a final result which is made by a machine according to random parameters and almost ignoring the aesthetics of the ending product.

TeZ: Generative concept is fundamental but I don’t agree with the tendency you described even if I know it’s on the increase, almost out of control. The term “generative” surely indicates the capability of creating a code to transform and generate something. But how does the code generate it? What does it generate? Many algorithms are generated through random parameters, but I’ve been working for one year and a half to create an algorithm that was not based on the random concept, which I think it’s an unreal thing, a function written by someone else to create an unpredictable number of events. In my opinion this represents a limit and I’m more interested in recycling a material which can self determine the unpredictability of a composition. This is what “generative” means for me; so the simple and maybe trite idea is to produce an unpredictable number of events without using random functions.

MK: Do you think these things give you more potentialities as an artist/performer?

TeZ: Well, if you work on a project like Protoquadro unpredictability and generation don’t derive from a random code or a function; they derive from the very nature of the photographs, in my case I used images colours as a parameter. I like to work on something that makes sense, I like to think that image can self determine its evolution  following unpredictable paths obviously. In an audiovisual context this let me work on sound and images which are indissolubly connected; I use the sound as a parameter to generate variants on a predefined visual matrix. This leads to a technical result which is a real audiovisual connection and let me explore absolutely new aesthetics territories giving new life to live concept which is so vituperated in the today electronic art universe.