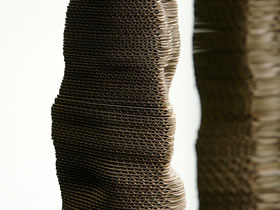 During the presentation of GeneratorX 2.0, which took place in Berlin’s DAM in collaboration with Club Transmediale 2008 and Hyperwerk, Marius Watz, the one who organized and curated the event, concluded his introductory speech inviting the audience to go and visit the generatorX exhibition, soon to open its doors. An exhibition of objects which are yet to exist.

GeneratorX 2.0 Beyond the screen was the second edition of the most important event in the field of generative methods applied to art and design, with the aim of investigating new possibilities of creation through the usage of code and custom-made software. Divided into three different moments, that is a workshop, a series of conferences/performances and a final exhibition, the festival has undoubtedly been a success.

The GeneratorX 2.0 workshop and the following exhibition, during which the objects produced during the workshop were displayed, are worth going deeper into, as rather than a traditional course they have been an occasion to set the starting point of a new era of creation. The participants confirmed this theory, if we take into account their different backgrounds and level of experience. Architects, designers, artists, researchers and students formed the “class”. Far from being a teacher, Marius Watz acted as the moderator of the series of intuitions, ideas and reflections which came up during the first days of work.

It has been extremely interesting to witness in first person the different approach every participant developed in such a new and unexplored creative challenge. In spite of possibilities being wide and undefined and time being short, all results were excellent. The research on new forms of sculpture and architecture was the leading trend, represented by the works of Andreas Nicolas Fischer, a project of data-sculpture or by the L-System visualization created by David Dessens, coming along with more traditional works (Leander Herzog, Dennis Paul, Nick Bruscia) and others more strictly linked to architecture (Eno Henze e Tim Schork, Satoru Sugihara).

TODO and Susanne Stauch took different directions, turning to decoration (the first) or to product-design (the latter). The exhibition was completed by some works not related with the workshop, by Jared Tarbell, Marius Watz and Commonwealth. All this was made possible by machinery which allows the quick creation of prototypes, such as laser cutting machines and numerical-control milling cutters, as well as by the recent reduction in the prices of such equipment, which made it peculiarly attractive for artists and designers.

We are witnessing a new step of the digital revolution, where bits are turned into atoms, somehow closing a logical and conceptual circle.

GeneratorX 2.0 can be seen as the basis for a new way of creating and producing structures and objects, in which generative techniques, evolutionary and adaptive systems, the analysis and the usage of databases can somehow lead to a new aesthetics, besides making easier solving complex problems in the projecting field and allowing a considerable opening towards the chances of mass-customization.