Tafkav And A Flower Called Vanda 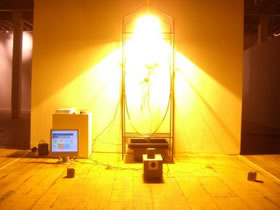 Communication between different entities, in an age of deep anthropologic changes, is the topic on which the complex research of TAFKAV , “The Artist Formerly Kwon As Vanda” , develops. That is a fully Italian installation which brilliantly deals with uncertain and controversial questions that still have to be discussed, thus succeeding in giving a glimpse on digital arts’ next future and more.

The installation is a cage containing a flower with purplish nuances and a solemn appearance, whose galvanometric variations are measured by a psycho-galvanometre which sends the data it gathers to a computer able to turn them into musical sounds. Presented at the Body-Process Art Festival AMBER’ 07 in Instabul, TAFKAV is an experimental laboratory set up to analyze the methodological possibilities for art, science, technology and nature (technoethic) to interlink and a demonstration that those links are necessary, possible and effective. The installation shoul not be considered just an actual object working according to set mechanisms; indeed, it implies a process of conceptual research (the theoric considerations can be read in a paper available to anyone who would like to read it) which precedes, follows and gathers both the teoric questions and the results the machine gradually helps to obtain about the nature of communication a human being can develop with another world par excellence: plants.

TAFKAV is the result of a long work of research and study carried out by one of the most eclectic supporters of digital thought and aesthetics among Italian scholars: Francesco Monico, who directs the Media Design School of the New School of Fine Arts in Milan. Currently he works as a Ph.D researcher at Plymouth University where he studies Syncretic Arts. We interviewed him. The work is complex and needs attention, but, believe me, it is really worthwhile. Let’s start.

Teresa de Feo: You presented TAFKAV as “a work on the communication between different worlds in an age of deep anthropologic change, which proves human beings urgently needs new and original interpretations of themselves. What do you mean by that?

Francesco Monico: The main subject of the work is the pragmatic of communication and the end of the humanistic paradigm according to which human beings were the centre of nature, where nature meant the world. In an age when cybernation has given us moist technologies, hybrid chips where the dry silica meets the wet biological material, we have started to understand that biological living entities have their own languages, cultures and feelings and our relation with them has to be connected by a cultural negotiation which goes beyond the ordinary human boundaries. In short, it will be necessary for mankind to go beyond humanism towards a new approach to nature and technology.

Teresa de Feo: As far as we can examine, TAFKAV is a complex work that builds its contents through the intersection of two levels: an aesthetic level and a theoric-conceptual one which follows scientific methods (paper available for users). So, the machine represents the possibility to create, verify or refute heuristically what is written in the paper which, in turn, changes every time new results are obtained by the machine. Does that mean creative methods and the role of the artists themselves are changing?

Francesco Monico: My work is more than just the installation and the theory behind it: since it is “research art”, I conceived it as a real research based on theories which are verified through a pragmatic  “experimentum”. The work has a scientific side and the paper follows the rules of scientific publications both from a formal and from a substantial point of view. So theoric research and artistic research are inseparably linked together. Through that point of view the artist is like a researcher who goes beyond commonly recognized aesthetics and, more generally, cultural rules, to reach the boundary of knowledge and new human sensory experience.

Teresa de Feo: What is the relation between concepts and “laboratory experimentation”, between “paper” and “machine”?

Francesco Monico: The relation is the same as between metaphysics and pragmatics. The paper presents the assumptions and the operational background (metaphysics ); but in order for the hermeneutic relation started by the communication of the plant expressed through music (pragmatics) to work, we have to consider the plant an ethical subject. To do that, we need to take the paper and read the story of a certain kind of ecology and of a famous American sentence according to which the trees of a wood were recognized the damaged part in a process and so identified as individuals with both a telos and an ethos, thus with their own rights.

Many colleagues of mine argue that the operation towards biological or technological diversity is not sustainable as long as the majority of people live in almost desperate conditions. That is understandable, but let’s not forget that many times in history a part of mankind started worrying about the identity of subjects who then were not considered human, such as native populations or African people. Well, at that time those western people who fought for their fair rights were accused of causing famines which had been provoked by Western people themselves. Today the approach towards technology and biology reality is similar. In the centre there is life, which is information production.

Teresa de Feo: In short, what’s the meaning of the project?

Francesco Monico: The project is meant to build a technoethic installation based on a metaphysic artistic process that creates ideas and concepts and a pragmatic one that defines experiences; the dialectic tha the process creates is an experimentum.

Teresa de Feo: What do you mean by tech-noetics?

Francesco Monico: The term is a mix between tecné and noetikos : Technoethic is the speculation about the impact technology has on conscousness processes. Technology can be telematic, digital, genetic, organic, moist, linguistic. Currently available technologies influence consciousness and have turned into third millennium art substrate: particularly the most interesting technologies are those mixing telematics, biotechnology, nanotechnology and inform the process of artists, designers, performers, architects. The aesthetic definition of the above-mentioned contemporary technological paradigm will be tech-noethics, that is to say the fusion of what we know and can investigate further about consciousness (noetikos) with what we can do and create through technology.

Teresa de Feo: Can you tell us how the installation actually works? What happens to Vanda (the beautiful flower is a vanda cerulea orchid )?

Francesco Monico: The orchid is connected through sensors to a psychogalvanometre, a device measuring body galvatometric electricity (which is very slow);the psychogalvanometre in turn is connected to Arduino, which turns electric impulses into Max Msp, which finds sounds in a computer ram which amplifies sounds’ sequence and transmits them through loudspeakers.There is then the Life support system: the plant is suspended in a structure where there is a 400 watt sodium lamp and a water nuking system including an underlying tray in which the water is gathered and which activates according to the commands of a computer checking the plant’s vital parametres. The whole technical device can be created thanks to the cooperation of two great experts, Massimo Banzi, who dealt with the construction of the psychogalvanometre, while Steve Piccolo dealt with the creation of every single note, noise and sound with which Vanda communicates.

We suggest that you should take a look at it.