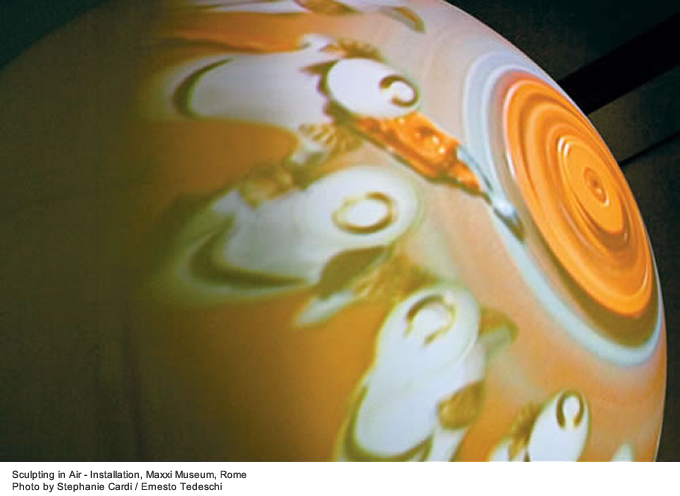 A survey between the real and the virtual, one which inhabits the intermedia territories, is spreading across museum exhibition spaces, housing works of artists who also develop their repertoire outside the Internet. This could describe curator Elena Giulia Rossi‘s latest exhibition at Maxxi, Rome: NetinSpace adds to the long conversation on Net Art and its complex relationship with a museum which has housed many such works previous to archistar Zaha Hadid’s fascinating exhibition.

The exhibition, open until 23rd January, has among others, the works of three artists set between physical space – inside the museum but in places of transit – and virtual space within website dedicated sections. These are the works of Miltos Manetas, Bianco-Valente and Katja Loher.

Katja Loher is a versatile young Swiss artist living in New York, who is also presently (until 26th September) exhibiting her new work Collapsocope in the prestigious XII International Architecture Exhibition. Looking at her works, transdisciplinary and intermediate, one can appreciate the utopian visions of early 20th century avant-garde artists, in her attempt to fragment and reassemble a grammar that is at the heart of her work. There is likewise a taste for mixing culture, overlapping media and skills, combining sculpture, video, installations, dance, architecture and alluding to the difficult and increasingly urgent relationship between Art and Science. 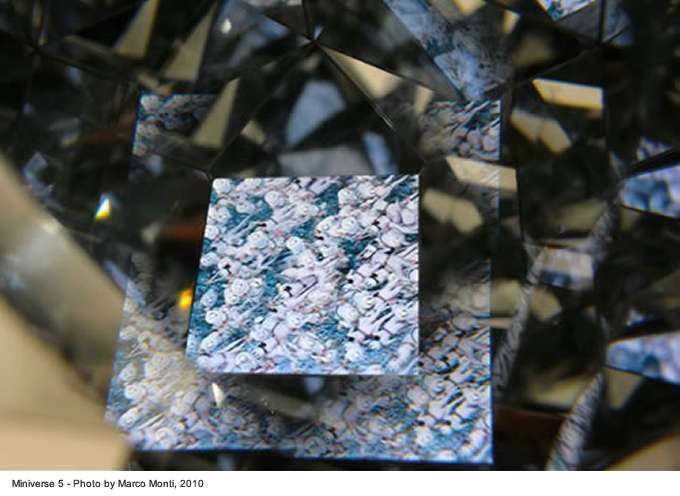 Katja Loher conducts a rigorous, almost obsessive, investigation which passes from the projection of videos on spherical surfaces – often suspended – with a reference to the organ of vision, the eye, but also to the form of planets. Videoplanets (the expression is the artist’s) simultanously pinpoints visions of simple and complex organisms, constructed thus that it is able to give us, with amazing proportion, extremely multi-faceted and powerful images about the nature of the world.

With the omniscient eye of the scientific observer, seen from a bird’s eye, Katja Loher plays with many aspects of human identity and the relationship between the individual and the community.

Its multitude of perfomers, choreographed in essential and serial movements, push the body to the limits of human capability, finding the abstract and geometric forms typical of the molecular vision. The individual melts in the community, resulting in unexpected and powerful evocative images. It is a provocation of the limits between art and science, which finds its strongest common denominator in the mediated and non-figurative vision.

We met Katja Loher and we asked her to tell us precisely its practices and its languages. 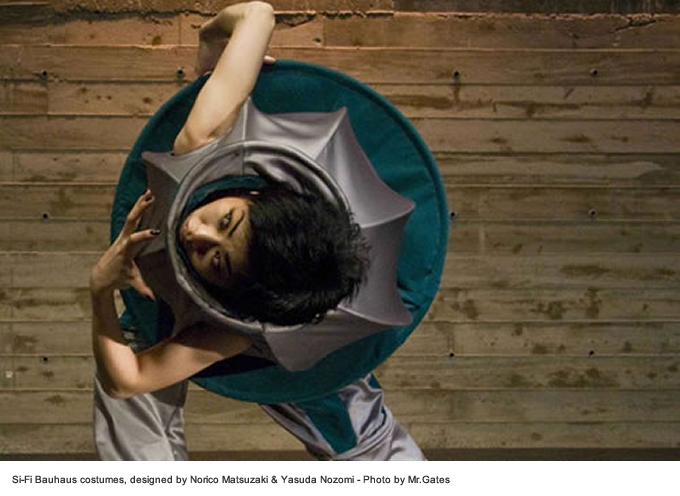 Giulia Simi:Your work is almost obsessively concerned with the spheric shape, which seems to refer immediately to the world’s and eye’s shape, as a kind of metaphor for the mechanism of vision and the relationship between the human being and the outside world. Would you like to tell us more about the motivations behind this choice of concept ?

Katja Loher: A projection is a surface that can be shaped in any ways. I create three-dimensional manifestations of the medium video. The spheres, fused with videos of choreographed crowds seen in the of bird’s eye view, create planetary constellations. The message is about locating a new identity in space and time. I try to depict a temporary definition of an altered global image, and reproduce – in a model – a hastily moving planet to understand its changes and directions. While offering a view from abroad I reposition the audience as observer. As if under a microscope we can study the movements of the crowds for meaning, we begin to see that they have formed letters and questions. A consistent practice in my work, asking questions, allows me to communicate concerns through metaphor in artistic syncretism.

The approach of the planetary identify is simple and becomes more complex. An apparently simple object is found; there begin the infinite findings. The Videoplanets changes the direction of the view of the observer therefore we suspect it just may as well be huge shimmering eyeball in turn watching us just as we are watching it.

In the most recent piece that I am showing at the Architectural Biennale Venice 2010 the globe breaks open, the images that have been hosted inside spheres burst the roundness, the bodies collapse, the words dissolve, what remains is an aggressive beauty of hundreds of bodies and the question: What is the most important thing we can be thinking about right now? 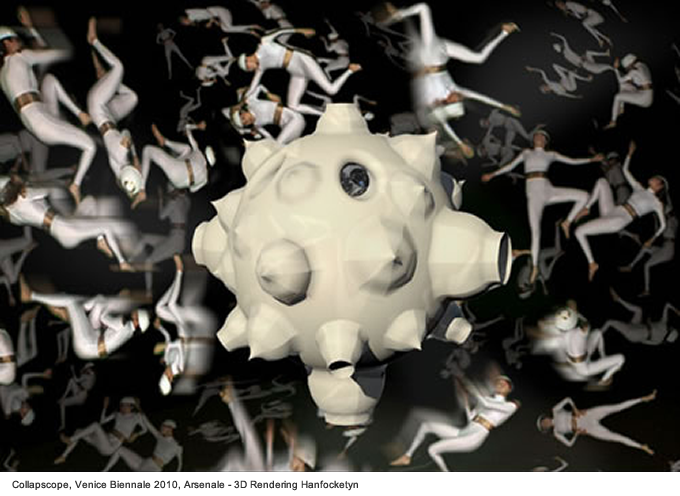 Giulia Simi:You often work with a crowd of performers, whom you direct in a choreography pushed to the limits of abstraction. On one hand, the bird?s-eye-view, on the other, synthetic and serial movements make performers’ bodies seem almost inhuman, signs of a visual alphabet which often refers to a scientific imagination. I immediately related to the avant-garde theater of the beginning of century, like Meyerhold’s Biomechanics or Craig’s Puppet, but we could certainly think of the artistic movements that have attempted to develop a geometric, structured and scientific vision, such as the Bauhaus. What inspired you to build this visual structure? And also, how do you proceed to realize these complex performances?

We communicate an interdisciplinary artistic language. Everyone performs a very unique role in the process of my art making, is part of it, like a fragment of the kaleidoscope.

Seen from a bird’s eye view crowds of people dressed in minimalist uniforms perform synchronized movements. In this choreography the individuals transform into seemingly abstract patterns until finally an ornament emerges like in a kaleidoscope. From this bird’s eye view the crowd has its own distinct rhythm without registering as a sum of its parts. A relationship between performers becomes apparent. An artistic pattern defines the face of the crowd and the identity of the individual dissolves in the collective idea. The point of observation changes when the bird’s-eye view is alternated with actions of zooming-in on the performers, to the point of capturing the expressions on their faces. 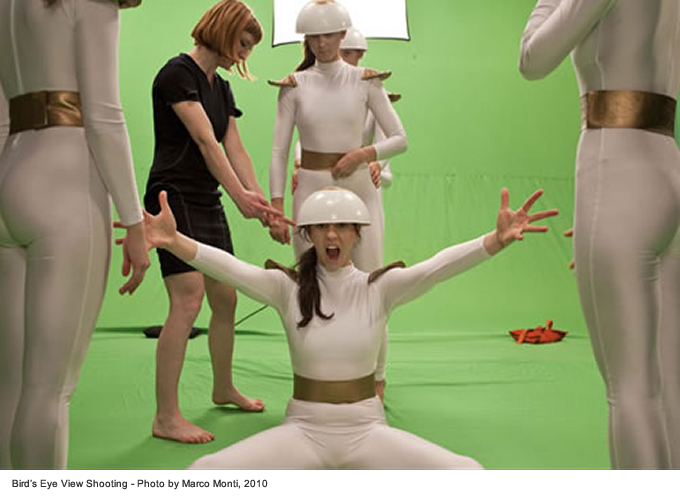 The most recent series of work offers a broad view of human interference with ecologic systems and their artificial reproduction. Workers become part of a machine, they perform in synchronized movement tasks that need to be done 24 hours a day to keep nature balanced and to allow mankind to survive on our planet at its current numbers.

The new production that will be realized this fall is based on a futuristic version of Bauhaus stage. The performers become living sculptures. They present the idea of choreographed geometry, man as dancer, transformed by costume, moving in space. The reduction of the human body into simplified geometric forms (a cylinder for the neck, a circle for head and eyes) is the main influence in this work. This reflects not only Bauhaus’ philosophy of stripping away superfluous aesthetics to leave just the functioning form, but also the dehumanization of the people. It strips of individuality in their identities, behaviors, and forms. What remains are geometric shapes that communicate vague human physicality.

Giulia Simi: MMany of your works push the confines between sculpture and video – you use the term of video-sculptures – and installations, in a fruitful and articulated relationship with the exhibition space. What is your approach related to the context in which your work will be exhibited? What do you think about the role of architecture in contemporary art?

Katja Loher: Shapes and kaleidoscopic spaces are generated out of the time-line of the video. I play with the contrast of a recognizable sculptural form and the ever-changing dynamics of its reality in the video. I try ironically to fit the universal laws in a model, in a process of conceptual compression that has something in common with the scientific observation. At the same time I play with scale, putting the infinite bigness of astronomy in the infinite smallness of biology.

Sculpture, video, sound, literature and dance sum to a homogeneous body of work, which reveals its heterogeneity after a first look. We are going to the curiosity of a rather simple object – a spherical sculpture – to the findings of its hidden sides. I plan the planetary constellations of my sculptures in interaction with the space and the context of the exhibition. I have a library of video footage with which I cook the pieces for the given context. I see two ways when art and architecture meet; they fuse together or battle each other. Working with video always gives me the opportunity to turn the light off: in the darkness the architecture becomes invisible. 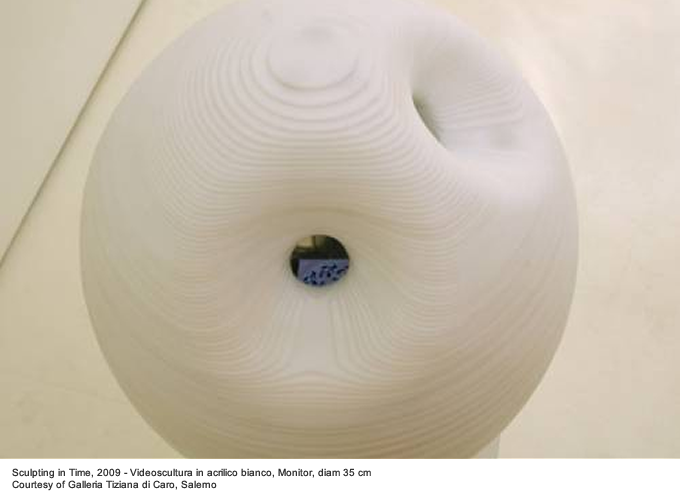 Giulia Simi:Lets now talk about your exhibition at MAXXI, Rome. In Sculpting in Air / Video  Planet, the Internet is a mediulm that allows the creation of space beyond reality. Yours is a game, in a sort of ménage à trois, between the viewer in real space – the work – the viewer in the virtual space. There is definitely a voyeuristic side in this relationship, which is joined by a difficulty in communicating the man-machine expressed in your video-sculptures. What is your relationship with the Internet? Do you think that this medium will find a place in your future works?

Katja Loher: The Internet makes my work available anytime, everywhere for everyone. It re-locates the Museum to the universe, disconnects it from space and time and crowd.

Two round videos playing on the Internet show both, the video itself and the viewer watching it in real time. The game between the observer and the observed is exposed when on the web, the visitors appear watching the person visiting the web while watching the work.

Sculpting in Air exhibited at MAXXI presents a dialogue between human and computer language, in order to investigate space, between the real and the virtual. The projection of a performance on a large sphere and live choreography of the human figures that build the phrases, create the impression of looking from outer space to our planet. 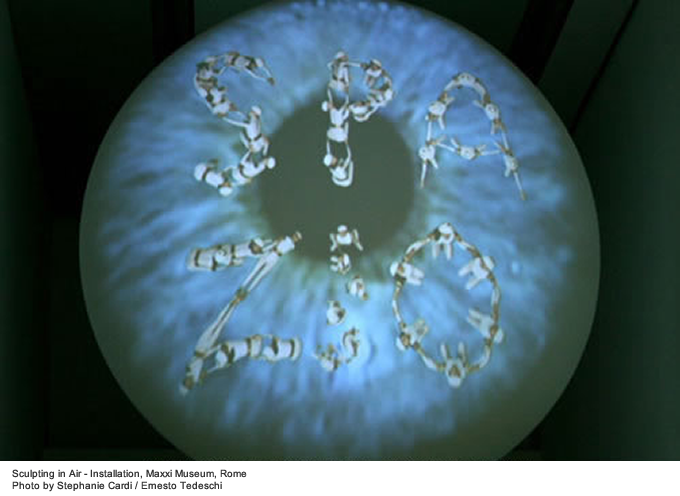 EThe meaning of the sphere is revealed, the globe becomes an eye when, using a video camera, it captures and catapults the visitor into the work, in space and on the web. At the moment the audience is observing the dialogue on the Videoplanet, they themselves are to be revealed.