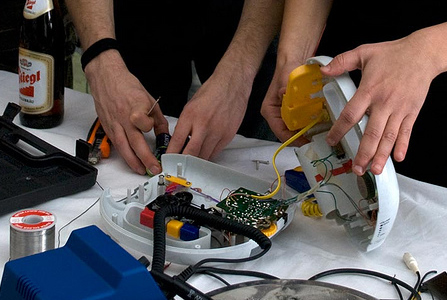 Art.on.Wires
A Laboratory for Live and Interactive Art & Technology

Art.on.Wires is an open laboratory for live and interactive art where researchers, engineers and practitioneers from various fields collaborate to explore and create a new generation of media technology for artistic performances and mixed-reality spaces.

Our main topics are Space and Interaction. Artistically we are interested in interactions with smart performance spaces and interactions between people in remote networked performance spaces. On the engineering side issues of interest are the integration of Vision, Sound and Motion technologies into a local space to enable remote and mixed-reality interactions.