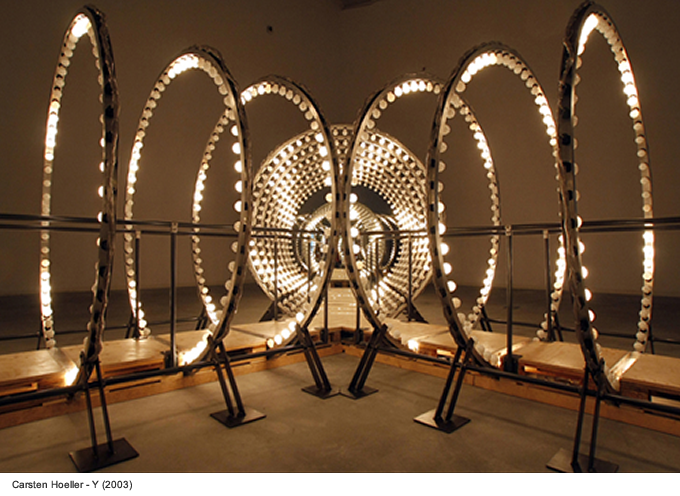 The exhibition Passages. Travels in Hyperspace (16.10.2010 – 21.02.2011), clearly represents an attempt for the LABoral Centro de Arte y Creación industrial of Gijon, Asturias, to make a qualitative leap. It doesn’t mean that previous exhibitions were less ambitious – the big events the center has been hosting, starting with the first productive effort (Feedback, 2007), have few equal in the world. Indeed, the Spanish center has been curated by the world best curators (from Christiane Paul to Steve Dietz and Susanne Jaschko) who have been able to create projects that could not be conceived anywhere else.

Nonetheless, with Benjamin Weil as new chief curator, the LABoral had to face new problems: the economic crisis tormenting Spain is not saving the field of culture; the relative isolation of the museum which has been able to pass on its productions only a couple of times; the scarce receptiveness of the territory that penalized a dynamic and advanced activity was difficult to communicate to insiders.

Passages, curated by Weil in collaboration with the chief curator of T-B A21 Daniela Zyman, tries to respond to such problems and find a way out. The first way consists of strategic alliances. The Thyssen-Bornemisza Art Contemporary (T-B A21) was founded in 2002 by Francesca von Habsburg in Vienna, and represents the fourth generation of a family dedicated to collecting art. T-B A21 is an amazing collection but its mission is to support the production of ambitious projects, which are often site-specific. During the last months, T-B A21 has produced four projects for the Biennale di Venezia, and is working on the production of The Morning Line, a public building conceived by Matthew Ritchie with Aranda\Lasch and Arup AGU for the next edition of the Biennale of Istanbul.

Interdisciplinarity and productive vocation are two elements that the LABoral of Gijon and the T-B A21 of Vienna have in common. In addition, presenting a successful example can be good for the former. Indeed, during the press conference before the Asturian authorities, Francesca von Habsburg has underlined the joys of production and the international status it can bring if such event is oriented in the right direction. 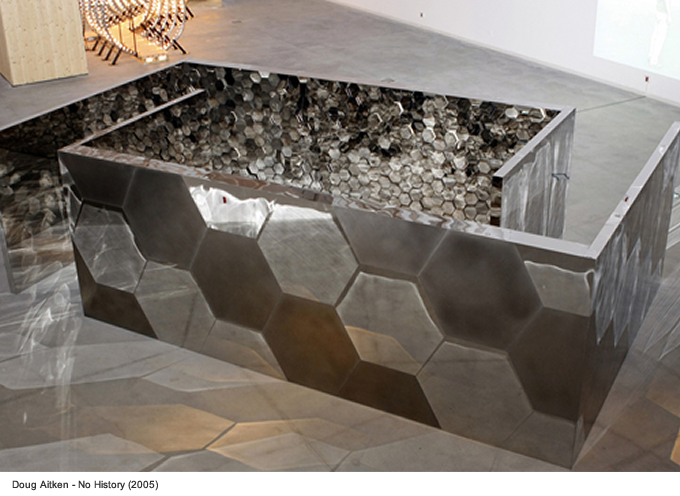 The second way is somehow a consequence of the first one. The T-B A21 is an amazing mainstream collection of contemporary art and includes artists holding a prominent position in the international scene, from Ai Weiwei to Doug Aitken, from Maurizio Cattelan to Olafur Eliasson, from Elmgreen & Dragset to Jeppe Hein, from Carsten Höller to Pipilotti Rist: these names can sound familiar to the press, and can bring to LABoral an audience less selected than that of previous events organized. At last, the big audience of art in Spain and Europe has become aware of the existence of the LABoral thanks to such names and their glamour.

If you feel bewildered before a review whose key words are “glamour” and “strategy”, you can rest easy: I immediately switch to the contents Passages is full of: the great ability of its curators let them work on the boundaries imposed by the personal choices of private collectors, and select works that enriched the exhibition with unsuspected facets, allowing to show a theme fitting the specific mission of the LABoral: “an exhibition centre for art, science, technology and advanced visual industries”, but also “a venue for artistic and technological production, research and training; and for the dissemination of new forms of art and industrial creation”.

Passages. Travels in Hyperspace is based on the idea, well explained by Benjamin Weil during the conversation of curators published on the exhibition guide (the monumental catalogue with the pictures of the installation will be issued after the end of the exhibition), that today art is a sort of augmented reality opening “passages” on a new dimension. Weil explains: “By restaging the real, artists trigger a perceptual shift, which in turn modifies our comprehension of the world that surrounds us. In that sense, the work of art is a doorway of sorts, a passage into a new dimension.”

The curators have developed such concept making reference on one hand to the theme of hyperspace debated by the postmodernist theorist Fredric Jameson as a destabilizing space which deprives us of the faculty to “position” our body, and on the other hand to the theme of hyperreality introduced by Umberto Eco who said that the repetition of what is real is an expansion of reality that makes us think of the original. 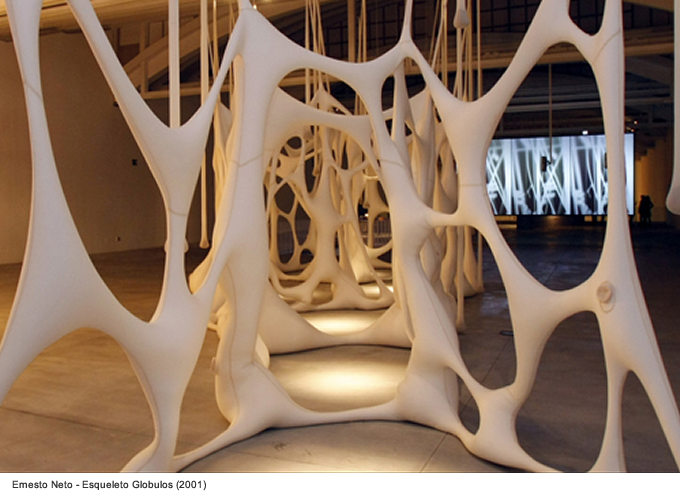 This conceptually interesting and perceptibly destabilizing exhibition is a kind of free journey among those three concepts describing the relationship between reality and its representation (hyperreality) or its media implementation (hyperspace and augmented reality). The exhibition makes it possible, first of all, by drawing a not nearly binding journey through the works that are set free from the interference of the exhibition design weighing on past exhibitions organized by the LABoral.

It is also possible thanks to the choice of works revealing an instable, elusive reality which is deeply influenced by perceptive limits (in real or figurative sense) of the spectator, that’s why in the hall the English artist Cerith Wyn Evans exhibits his neon columns that, with their irregular illumination, at the same time seem both to support and make the space irregular and instable. In the next room, Olafur Eliasson exhibits Your Uncertain Shadow (2010), one of his most simple and charming works: a row of spotlights in different colours, and as the spectator passes in front of the device, it casts against the opposite wall different shadows of him/her that reflects in the Reflecting Object (2006) of Jeppe Hein, a chromed metal ball rolling on the floor aimlessly.

In the main exhibition room, the spectator is literally caught by the frozen reality of Los Carpinteros. The Cuban duo faithfully reproduces the climax of a dynamic event in the way only a photographic image could depict. Fragments from a cinder block wall hang to fishing nylon and are depicted in the point of impact. Janet Cardiff and George Bures Miller are less spectacular but more subtle: by lifting an antiquated telephone receiver, they suggest us to listen to a conversation on the nature of space and time while sitting before two installations – realized by Ernesto Neto and Ai Wei Wei – that challenge both of them.

On the floor below, two recent, and already “historic” installations of Doug Aitken (No History, 2005) and Carsten Höller (Y, 2003) take the center stage to the detriment of less spectacular works by Maurizio Cattelan, Carsten and Olaf Nicolai, Sergio Prego and Paul Pfeiffer. No History is a big structure whose minimalist shape is in contrast with its hundreds of moving hexagonal mirrors on the surface creating a fragmented reality. Such reality becomes hallucinatory in the tunnel of blinking lights created by Höller. However, the exhibition concept would be incomplete without the contribution given by Super-Noi (1996), the famous work by Cattelan in which its elusive identity is produced by forensic sketches drawn by policemen from the description given by the artist’s friend and acquaintances. 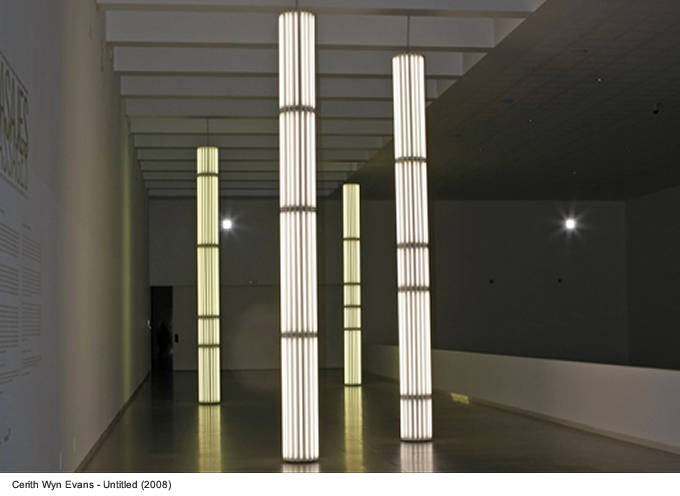 The journey of Passages ends with – so to speak – with the tautological installation of the Polish artist Monika Sonsowska, called M10 (2004). The starting point is the recent Polish history: during socialism, in order to assign housing to everyone, Polish administration used to convert two-room units (M2) in four-room units (M4). She pushed such system ad absurdum, converting the typical one-room unit (M1) in a ten-room unit (M10).

The result is a labyrinth made of tight doors and spaces accessible through a back door-like exit placed on a wall. You can walk through such installation anxiously looking for a way out. When you find it out, you feel sure you are back to where you started from (not to be in a parallel universe where the audience we don’t recognize is enjoying an exhibition very similar to Passages)… but it is just an assumption denied by the other works displayed.

As you can see, new technologies are implied in many works displayed, but not all of them. Maybe, this is part of the “new” mission the LABoral is committed to: erasing the artificial distinction between New Media Art and contemporary art, and demonstrating that all art is there to open passages on new dimensions.