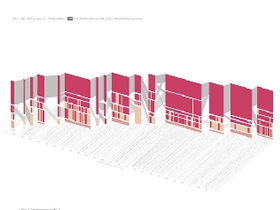 The 23rd of September 2006 Further Processing was opened at the Galleria Mediemturn of Graz, another rare attempt, such as C.Stem (Torino) and Bitform (New York) to make emerge, from the dark world of underground, generative practices and creation of systems meant for creative production.

The show presented ten central positions of ten artists on the issue of generative art and software art attributing to the language of Processing programming a fundamental centralizer role. Processing is an environment of development created by Ben Fry and C.E.B. Reas in 2001 at MIT Media Lab during the computational design course by John Maeda . Marius Watz was the curator of the show and, thanks to the support of the Kunstverein Medienturn gallery, has created this collectivity involving the most important and famous artists of this field.

The show developed in the most traditional way: a meeting with journalists and then the opening, and will last for two months, in such a way as to give possible collectors the chance to buy works. The only differences from a traditional show are its works, which are mainly impalpable and maybe out of place in a gallery. It is in fact a processes show and not an objects’ one.

Each artist showed his modality in defining a system made up of rules. The show is divided into two distinct areas: one devoted to data visualisation, while the other one merely to generative art, with a more hedonistic approach to aesthetics.

Within the zone devoted to data visualization we can gaze at the famous software applications by Ben Fry , Isometric Blocks and by Golan Levin, The Dumpster , produced by the Whitney Museum : both works are associated with an elevated technical technology, while they differ on the theme visualised. Isometric Block shows in different modalities the complexity of the genetic code for blocks, while Levin’s work shows in real time the comments of hundreds of blogs referring to interpersonal relationships, in which it is interesting to find out the huge similes of sentences and words by thousands of young people worldwide, when they have to tell someone about their own love affairs.

Pablo Miranda Carranza experiments with architectural principles, creating systems of visualisations of evolved objects according to genetic rules, while Martin Wattenberg with his Thinking Machine shows the spectator the calculation process of players in a chess match, closing this data-visualization area.

Within the zone devoted to generative-art you can find works by C.E.B. Reas, Karsten Schmidt (aka toxi), Marius Watz, Mark Napier, Lia and Fabio Franchino. In this zone each artist uses systems for the formalisation of aesthetics, using their own extremely tangible stylistic line.

Further Processing was another little chapter of a book prevalently made up of efforts of passionate people desiring a practice which will have a very important role in the future, both in art and in the creative expression as well as in our daily life.