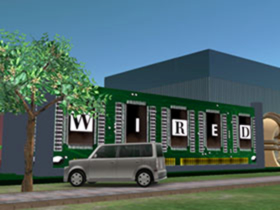 A Toyota parked in front of Wired’s head office, here you are an image which pretty well summarise what is going on in Second Life. Companies start to arrive, as well as the press.

The interest of the international press was in fact shocked recently by the Second Life phenomenon, which has overtaken the 1.000.000 residents in October and which is starting to be seen as a tool which is changing the way of thinking the Web, instead of being a simple game.

In less than a month, Reuter, CNet News and the magazine Wired have opened their head office in SL. Reuter has opened officially their head office in SL the 16 th of October, on an entire island with an impressive circular building made of iron and steel within a huge hall provided with screens broadcasting news, offices, conversation and meeting rooms. It provides SL with real world news and follows SL events presenting them to the external world. It has even opened a web site with news, information on the trade exchanges in SL, the exchange Linden Dollars (local currency)/US dollars , interviews and links.

Within SL, news can be read on special News HUD distributed next to Reuter’s news desk, portable personal monitors on which updates are shown so that anyone can read them. In SL it is held by Adam Reuter, in real life Adam Pasick , a journalist specialized on new technologies and media, who is now working full time within this virtual world.

Cnet Networks has opened an office on the 26th of September, which is the precise copy of the building housing the agency in San Francisco . A brick building, five floors high, on the seashore, with an amphitheatre suitable for presentations and interviews and scene of a conference of Sun Microsystems. Not too far away from Cnet building (you can reach it by foot), there are Wired ‘s offices, landed in SL on the 17 th of October simultaneously to the publication of one of its travel guides on this incredible virtual world. The first striking thing is the building itself, built as if it was the inside of a computer. You walk along the motherboard between memory slots and processors; when in the amphitheatre images are projected on a graphic board and you sit on condensers.

The situation on the whole is yet quite experimental but the arrival of official media is destined to change the panorama of press in SL which so far has been developing through independent projects such as blogs, and editorial initiatives. Many to be highlighted: among the first ones, New World Notes, directed since 2003 by Wagner James Au , who was already a journalist from Wired and one of the first professional journalists in SL under the name of Hamlet Linden; The Second Life Herald directed by Urizenus Sklar and active from 2004, born after the previous Alphaville Herald founded by the philosophy professor Peter Ladlow, whose aim was to study the legal, social and economic implications of virtual worlds. It has many thousands of readers each day, and it deals with issues- even burning- emerging from virtual worlds in a direct and tough way; The Metaverse Messenger , a real newspaper for a virtual world, with a layout similar to a high-resolution colour newspaper.

A wide confrontation on the in-world press (within SL) took place on the 15 th of October during the third meeting on European Kuurian Expedition , the scientific expedition through virtual worlds, professor Edward Castronova of Indiana University has started and which was coordinated for Europe by Mario Gerosa (aka Frank Koolhaas). In the convention room of the Parioli, the Italian Sim of Bruno Cerboni (aka Bruno Echegaray) in a holodeck creating as background the image of the Coliseum, they have dealt with issues such as press independence, the advertisement role, the need to develop magazines specialized on fashion, architecture, design, art as well as newspapers. There were different newspapers present in SL, projects held by a single person and projects with their own editorial staffs.

Newspapers and magazines of Second Life have different versions, From Prim to Print”, as Ute Hicks considers his SL Business , that is to say the version as a 3D object to be glanced at, up to the PDF to download and print. The PDF versions are absolutely true magazines with an accurate layout such as Second Style by Celebrity Trollop, a fashion magazine, presenting collections for avatars, following and laying down trends in SL.

During the meeting, Miller Coopland presented his first number of In The Grid , a new cultural magazine of Second Life with 42 pages, with interviews to artists, programmers, which is downloable for free. Many participated to the debate: there were Korbin King from Omg magazine , Hipernova Sol di Vistas on Second Life, Garret Bakalava from VXM Voodoo Estreme Magazine . And, naturally, me for Digimag!

It is a fundamental moment, from small independent publications with one table and four chairs as their head office, up to press giants: it is the sign of a big change what you notice in SL those days.

At the reception of Wired’s office there is ShanVenus Magnolia who welcomes me warmly. I ask her:” Wired have decided to enter in SL?” ShanVenus Magnolia: “Although SL has been around for a few years it is now coming to fruition, sort like the Internet was in 1993, we want to be a part of that”.