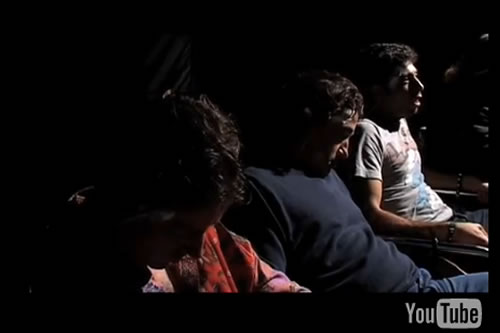 Imagine you have a Facebook account. It isn’t difficult at all. Imagine you are Danish and live in Copenhagen and someone asks you to share a cause aiming to defend the Stork Fountain, the city symbol, which is going to be knocked down. If you were a citizien who belives in the historical identity of the city where you live, you would probably share the cause without problems and maybe you would also widespread the idea among your friends. There is only one thing: this piece of news is totally false. Nobody has ever thought to knock down the most important sightseing of the Danish capital.

If we were talking about fake or prank, it would be logic to make a parallel  of course with all the differences of the case  with the Nike Ground on 01.org which refers to the Karlsplatz in Wien. But the author of this action on the Net was the Danish psychologist Anders Colding-Jørgensen who decided to interrupt the experiment after seeing the number of supporters going up and reach 28.000 people in few days.

With this example Evgeny Morozov began his speech at the Cloud activism conference which took place this year in Linz during Ars Electronica. It is a series of speeches on activism analized from the point of view of cloud intelligence. The Russian journalist and blogger explicitely declared to be very sceptical about the activism campaigns which are trying to change the world through Facebook or Twitter. Actually, it is normal to wonder why 28.000 persons decided to share a cause that in reality doesn’t exist. The explanation seems to be the way in which these causes are felt not only within Facebook, but also in social networks in general.

These are in fact a kind of “interior design” for users who wants to full their account as they like to. Sherri Grasmuck‘s studies  sociologist at the Temple University  clarified how the users of commercial social networks reveal their identity in a more implicit than explicit way; in other words, all causes, groups or whatever they share, explains more their story than what they explicitly write on theirselves. These are interesting explanations, but they do not tell a lot on their real consequences for activism.

For this reason Morozov suggests the emerging of a new practice called (using a neologism) Slacktivism i.e. activism practiced by slackers. Facebook became a kind of supermarket of identities, in which sharing causes gives us a feeling of importance with zero strenght and inevitably with zero social impact. The most worrying thing however is the fact that this practice brought to a departure from a real effective support.

We could think that such a practice for many people is not the beginning of a real support towards the resolution of social problems, but it is the end of this engagement. During the conference, Morozov tried to analize the wrong assumptions on which these campaigns are based. The most widespread idea is that a high level of visibility could be determing in the resolution of a problem. Therefore it is often asked to share a couse, open a new one on different social networks and widespread them as much as possible. This could be true for some cases  above all local cases  but for global problems using this practice is at the end counterproducing because there is no real translation of awareness into action.

This becomes evident in case of “fund collection”. A fund collection could be really more proficuous through these social networks, but the probability that those who share the cause at the and also makes real actions to support the cause is almost zero. A very interesting initiative in this sense is Free Monem’s one for the release of an Egyptian blogger who invited not to make donations but to act. His slogan was: “NOT DONATE; Take action”. According to the promoter of this initiative, Sami Ben Gharbia  a Tunisian activist – the campaign had been organized to underline the fact that not only donations are important but above all actions and also to underline how many local NGOs had collected funds without results from the point of view of the blogger’s release.

Many psychologists tried to analize the phenomenon of political campaign sharing in the digital world defining it social loafing. This was discovered by Max Ringelmann in 1913. The French scientist asked a group of people to pull together a raw and discovered that the strenght applied by each single person was lower than the one they would have used if they had had to pull the raw alone. Morozov explained these experiments during the conference: “This is exactly the contrary of synergy. Experiments normally demonstrate that we use less energy in an action when there are other people doing the same thing with us (think to the last time you sang “Happy Birthday”). The core lesson is that when everybody in a group make the same simple task, it is impossible to evaluate each single contribution. Therefore people inevitably became lazy and the more pepople are used, the lower is the social pressure of each person”. We could therefore think that finding a common denominator for all user to convince them to share a cause in a social network could actually have a negative effect on activism and a stronger engagement of activists who try to involve single persons.

The speeches of two other partecipants to the conference – Xiao Qiang, Chinese activist and Hamid Tehrani, Iranian journalist and blogger  were apparently different from these analysis.

When the Iranian Green movement protested in the streets and in the squares of Teheran, we witnessed a particular mediatic interest on the use of Twitter within those groups of protest. The wrong image which came from that period was the idea of a plattform with a key role in the organizational and spreading tasks of that demonstrations. This is partly true, for the spreading task, but not for the organizational one. During the conference Tehrani remembered that Twitter is a banned plattform in Teheran and the proliferation of accounts in those days was partly due to people living abroad who were constatly updated through e-mail from friends or relatives.

Moreover this increase was necessary to create a cover for those people that in Iran had been able to skirt the censorship. Through Twitter people managed to keep the Iranian society abroad always informed catching the mediatic interest of the Western world. What the mass-media told was therefore false, i.e. the fact that the number of activists connetted to that plattform was the number of people along the streets. This experience is far away from slacktivism. In this case even only using this social network was a political act of criticism against censorship. Moreover the different means were used for very different communication aims than the ones they were created for.

Xiao Qiang told about the big blackout which happenend in China between the attempt of oppressivly control the population by the authorities on one side, and a boost towards consumption and the use of new media on the other side. Therefore groups of Chinese bloggers ended up constructing a net in which single persons can avoide the death of their own blogs assumine changing identities within a community that defined its comunicative codes in the years. Some of the symbols of power have been used within this language: so “river crab” a word that in Chinese sounds in the same way as “harmony”, is used to call those blogs that have been “harmonized”, i.e. run into censorship. Another example is “alpaca”, the strange Chinese horse, symbol of censorship, is used as password. The Chinese bloggers’ situation is surely different from the various communities using social networks, but it underlines the differences and similarities of these two speakers’ analysis with Morozov’s one.

Facebook’s causes  like all other instruments used to the same aim  are nothing more than a “normalized” form of activism. In this way, also the tools of political actions are taken into account in the production processes. So, as the introducing text of the seminar “Storia e critica sociale del web 2.0″ (History and social criticism of web 2.0) which took place last year durino the AHA Camp, said: “The last iperglobalized stage of capitalism  called “cognitive capitalism” or “linguistic capitalism”  is based on the ability to make every human activity enter into the economical enhancement process, even those activities which are not directly related to economics. This is the result of an intelligent move of international capitals, an action aimed to absorb various typical motion of the demonstrations against capitalism of the past decades (claim of flexibility at work, attempt to stop the division between work time and free time, autonomy of chiose) and insert them in a new techincal and organizational context and therefore change and stravolgendone the meaning”.

In this case we do not refer only to the content but also and above all to the means. Actually these procedures are not new: who does not remember the apeals signed by intellectuals who wanted to share a protest with their signrature during the ’20s and ’30s? How many similar means are used nowadays and widespreaded to a wider publicum not necessary through social networks? They are of course means based on a restricted concept of social awareness and reduce the political responsibility to a clic or a signature. Maybe these methods lost most of their force a lot of time before Facebook changed them into a little tool of a digital interface  but did they really have one before?

However, if we look to the Italian situation, it is much more interesting to analize how from social networks is emerging a different expression of political awareness. The widespreaded discomfort for the situation of most Italian mass media, tv and newspapers, pushes single persons to a reaction which finds its relief in YouTube and which quickly develop through Facebook. Complaint and counterinformation videos come from every kind of user, not only professionals, but also common people who decided to raise their voice. Some of these videos are able to widespread like viruses, using ironical techinques of audio and video installation or recalling common imagination or complaining about critical situations, or all these factors together.

One of the most interesting examples is the project titled “Lost In Berlusconi” by Kook Unidentified Production (http://www.kook.it/), completely indipendent and self-financed. In this project the authors  referring to the very popular tv series Lost  played two episodes (hopefully there will be a whole series) of a soap opera produced to be broadcast through YouTube. These two short videos are genial ironical sketches on the inexplicability of the Italian government. They are an example in which technical knowledges are really elaborated whereas the game of references to the tv soap opera and the situation of the Italian politics is very refined.

The diffusion of videos like these ones but also videos less refined but anyway interesting is not so recent as idea, but recently it seems to be the expression of a common reaction towards the official political world.