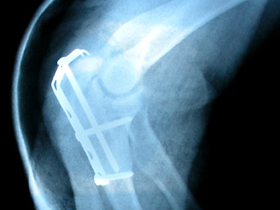 During the meeting of the Radiological Society of North America (RSNA) in Chicago from the 26 th to 30 th November has been presented the new system Globus MEDICUS ( Medical Imaging and Computing for Unified Information Sharing).

It is essentially a grid computing system applied in medical ambit. The grid computing system is in a few words the coordinated and distributed use of a huge quantity of servers and databases that, thanks to a strong interconnection, work together as a unique computer, going over the pikes of work, the economic, mnemonic and energetic costs. A technology considered by the M.I.T. Technology Review as one of the tenth who’ll change the world.

In particular, the Globus /MEDICUS allows radiologists, doctors and oncologists, but even researchers of 40 North America hospitals to share and enrich a database of radiological images of child diseases such as tumour at different stages. The principal aim of the project is to offer the possibility to recognize and immediately operate in case of cancer, as well as stimulate an ulterior diagnostic collaborative practice between the doctors.

The Eurekalter.org newsletter (the most important in the scientific ambit), going back to the statement of Stephan Erberich (computer programmer of the USC Keck School of Medicin and director of the Functional Imaging and Biomedical Informatics at the paediatric hospital of Los Angeles), has properly titled the news as “Breaking the medical image communication barrier”: thanks to the Globus/Medicus the doctors will finally share medical images instantaneously, internationally and with a good protection of the privacy.

The grid system realized in medical ambit is just the last of a series of applications already used in different sectors, such as the technological research and the commercial communication. The system of open-source images has been developed by the USC Viterbi School of Engineering’s Information Sciences Institute (ISI) in collaboration with the Argonne National Laboratories (ANL) , while the electronic standard format has been developed by the committee Digital Imaging and Communication In Media (DICOM) .

The system is on from the September 2006. The cost for a “grid gateway” is ridiculous, in the order of the $1000, and allows upload and download operations with a large band. The problems between the initiative and its opening are intuitable: not only technological, but primary of privacy, administration and law. The anonymity should be guarded, most of all because of the sensitive age of the patients.

Although the thousands of reassurances, the project raises some doubts about privacy (the profanation of the body, the violation of the ontogenesis and life?), but we must remember that the phenomenon of the medical images sharing is not a new and unfruitful practice in the scientific ambit. It has a long communicative tradition that the historical of the science Renato Mazzolini has defined as “Non-Verbal communication in Science” and it allowed the science to find resources from the canon of the artistic representation, reinforcing the social role of art and science under the protection of the “scientific concept” ( Renato G. Mazzolini , Non-verbal Communication in Science prior to 1900 , Firenze : Olschki , 1993).

Inside the same volume, we can find a contribute of Andreas- Holger Maehle by the pregnant title: The search for Objective Communication: Medical Photography in the Nineteenth Century . It’s amazing to see how the typical problems of digital images were already present in the scientific community of the 18 th Century, when the invention of the tool developed the photographic practice for scientific aims.

I’m talking about the anonymity problem (once called “violation of person sanity), the representation conventions, the “retouch” of the images and their filing. Even if the system of distributed intelligence can nowadays offer an increment of the connectivity, I had the possibility to underline in other articles how they should work on possible systems of long term consultation and storing.