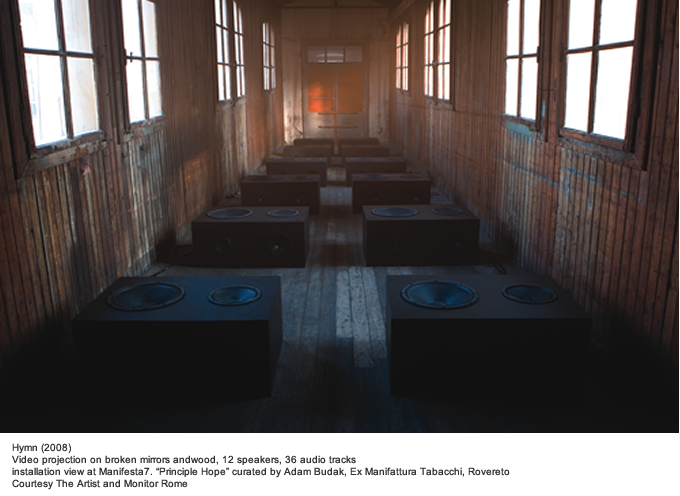 His artworks and his performances have been exhibited and staged in some of the most important art venues in Italy and abroad such as the Venice Biennial, the Palace of Exhibitions and the Museum of Contemporary Art of Rome (MACRO), the Museoin in Bozen, the MAMBo in Bologna, the Tent in Rotterdam, the Los Angeles Crisp Gallery in London, Marina Abramovic Institute West in San Francisco, talian Academy for Advanced Studies in America at Columbia University in New York. His various accolades include the Premio Acacia (2010), the Prize for Young Italian Art created by DARC and MAXXI-Museo Nazionale delle Arti del XXI secolo (2006-2007), the New York Prize promoted by the Italian Ministry of Foreign Affairs and Columbia University in New York (2006) and the International Prize of Performance (Dro, TN) (2005).

He is energetic, ubiquitous, an artist and a musician, he is a genious and has an apparent wild side, paying very much attention to details he combines in his artwork the moving physical presence and the referential conceptual contents. 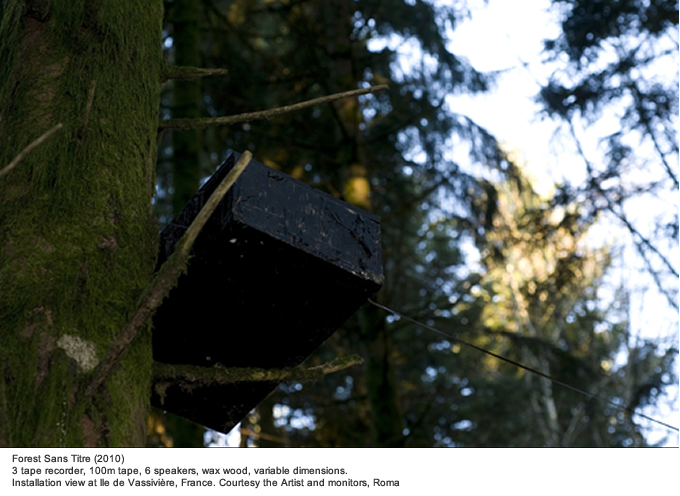 Nico Vascellari is an artist who communicates mainly through the performance, the video, the installation. These tree creation fields are able to enhance most of the components characterizing his artistic research.

Performance, installation and video work are the language of possibility, of constant change, of regeneration. This “evolution theory” is a landmark of Vascellari’s artistic work: moving, changing place, changing, being in movement. He does not want the artwork to be static, he wants to make something new out of it, to make it come to life, to make it itself and something different from itself; to communicate it here and now, to change it again in the future, like a constantly evolving and changing living being. Vascellari’s work is autonomous and impure in its every manifestation.

In the short text we are presenting here, we want to point out, through the analysis of some of Vascellari’s artworks, how much the movement is important to and grounded in the crucial components of Vascellari’s art: sound, substance and volume.

First of all sound expresses a scathing and intimate instinct to act, to the gesture, to the dynamic and active behaviour. The noise, hardcore and punk sound (which is known to be a point of reference in Vascellari’s background) is present in all the artist’s appearances. A sound which is very much alive in the performances, which is full, strong, fierce, affected by the active presence of the audience and by Vascellari’s experiences as a musician; a digital sound which, when it is represented through video artworks, becomes constant distortion, dissonance, incomprehensible harmony starting up again from the origins of concrete music and rolling down to the post-post-post industrial era.

A particular comeback to a certain sound, noise, clangour, reminds the spectator who lived it, the permanence act, and also reminds the artwork user the origin of Vascellari’s way of making art. So it is not by chance that the first indication revealing in the analysis of the artist’s artistic activity, is sound. Sound experience meant, also and most of all, as a symbolic experience.

Even starting from a primordial video like Untitled Song (2004), characterized by a non-narrative linear simplicity, in which the main character is the metallic sound of parts of a drum breaking into pieces rolling down almost endlessly in a wood, we can see how much sound and sound suggestion are prevalent in Vascellari’s activity. 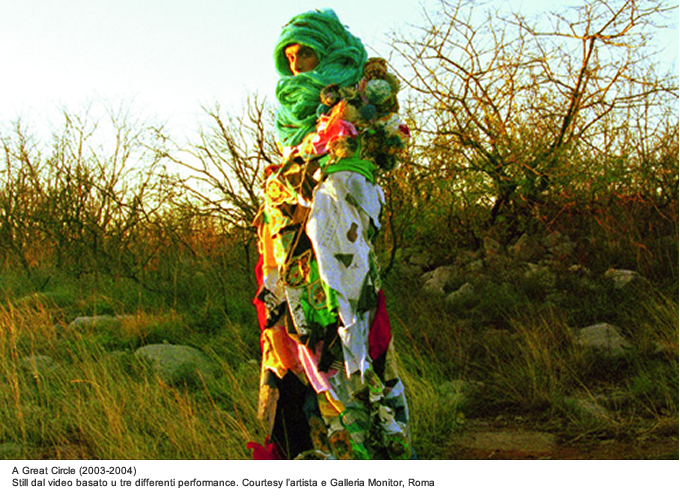 A Great Circle (2003/2004) is a video based on three different performances. The opening prefigures a dark and despairing setting, affected by whistles, buzzes, a glimmer of a weak light revealing nothing more than you can imagine. The incipits is roughly interrupted five minutes after the beginning by some mountain landscape daytime visions, a carsic valley crossed by a human figure moving through blankets of leaves and woods covered with snow. The character, coming from the performance Nodo Terziario (2003), is accompanied by sound, just like nature is, and they both unveil themselves like evocative and sudden appearances.

The symbol or ritual is here very much suggested by the images, the setting, and by the main character’s characterization. He wears a garish multicolour mantle, made of many fabric portions, and his head is covered with an emerald green wool, he walks slowly until he meets a microphone becoming the tool for the next action; the main character will constantly follow the cable taking to the symbolic object turning into screams and sound. This activity seems to influence the course of nature, in which quiet moments and sun light alternate with night darkness illuminated by the moon’s glow.

The setting interweaves with frames taken from the Glitter Secondario (2003) performance: a band dressed in glitter tracksuits performs in a tight room. Meanwhile in the video the night comes and in the woods the rite rages: moon, sound, light flashes, contractions…

“But who are the monsters coming from the woods, threatening the civil society, poking fun at it and overturning it? The primigenial force of nature, the unbridled energy which has not met the limit of civil laws yet, becomes embodied in character with many identities, who comes up again, in the mists of times, in a dimension which knows no limits of time and space: the Wild Man”. [1] 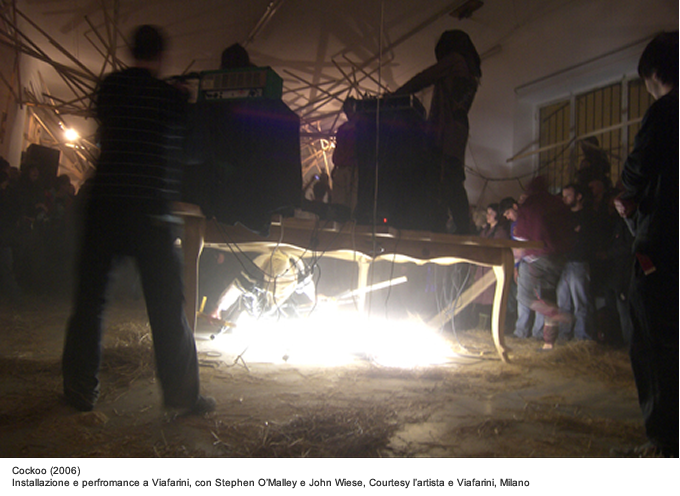 The reference to a figure so present in the Italian (but not only) popular pagan tradition, is inspired by the presence of an individual strongly linked to the animal world, with a garment – quoting once again the essay by Maria Altiero – which “frills of different colours and most of all bells or objects able to produce deafening noises can be applied to. The behaviour of these characters is always ruffled, extremely violent and aiming at subverting the rules of the quiet living”. [2]

The metamorphic ritual has a deeper meaning to the link with the ancient Greek thought, which Altiero suggests. The man of the woods represents the Wiseman in the Greek theatre, so he is the one who through the ritual, having lived in the wild men’s shoes, accomplished an experience of initiation and direct knowledge of the meanings of men’s and nature’s origins. The ritual experience is then an extraordinary experience through which the human being can get to know more and get to be more aware in order to live in a better way.

The meaning of what we have just talked about is reinforced by the footage of the third performance which completes the artwork: Buio Primario (2003), whose video is dominated by the physical and emotional experience of Vascellari, who is lives a week in a four-meter narrow space, trying to reach a primordial stage to live in, producing, creating, eating, setting himself free. 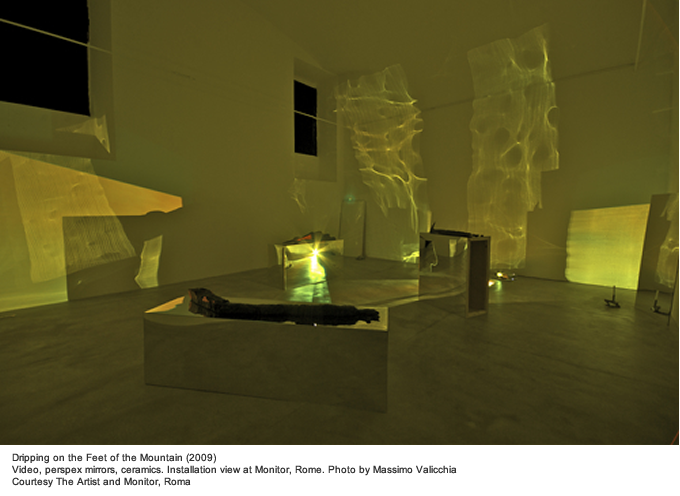 The sculpture is for sure a guide language for Vascellari. [3] The artwork Revenge (2007), presented initially at the Sala Marceglia of the Arsenale during the 52nd International Art Exhibition Venice Biennial as a site specific installation and with three performances with John Wiese, and in following stages as a video and a performance (TTV Festival 2008, Riccione), represents the will of giving shape, substance, volume to the creative inspiration.

60 amplifiers are installed on an impressive concave wall obtained by burned wood and they were landed by as many bands and underground musicians. This becomes the perfect stage for the performance moment. Nico Vascellari kicks into action interacting with the wall: the noise amplifies, gets out of the speakers and comes back to the microphone, the wall itself comes to life, plays, whimpers, whistles, activates constantly reacting to what is happening nearby.

The substance is then meant as objectivity and tridimensionality, of the presence and the vision, of the hearing. It is the lowest common denominator which draws nearer the concrete object and the immaterial sound. Both the sound and the thing, as an installation and sculptural element, can be qualified and quantified by the volume marking them. Vascellari’s experience is a volumetric experience.

I hear a shadow (2009) is the artwork in which you can feel and experience the importance of volume the most: a huge melted bronze monolithic statue dominates the space (first the Lambretto Art Project in Milan, then the Museion in Bozen). It is the bronze cast of the detonated top of a marble mountain, and its surface underwent a special treatment which made it look like carbon, a burned mass, signed, carved, and alive, layered, old.

This mass complies with a second treatment dealing with volume: the conversation which Nico Vascellari has with it during the performance is a speech recalling the sounds coming from within the earth, it is a constant comeback of frequencies, fluctuations, pressures generated by the artist’s action on the bronze body, and makes it possible to hear the sounds linked to other ones selected and elaborated by musicians who are present during the performance action. 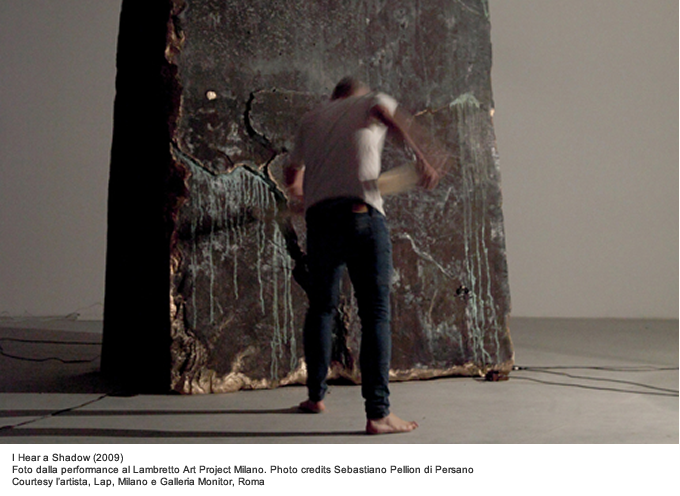 The audiovisual experience: Video and Installation

An artwork like A Great Circle (2003-2004) makes it clear since the beginning of his activity, that Nico Vascellari is not interested in the video as a documentation. The video is a complete artwork, it stands on its own and has its autonomy and strength.

To make this independence from the video evident, Vascellari tries to avoid a rhythmic and didactic interaction between sound and images. The video is almost never clear, the image remains evocative, it suggests you to imagine what is about to happen. The blurred, syncopated perception is a constant characteristic in the video shots, characterized by a frenetic editing and by a constant overlapping, stratification of vision and sound levels.

For the introduction, the creation and the exhibition of the video, Vascellari makes use of both the total immersion in the video installation environment, and the frontal vision on monitor. The meeting modalities between artwork, space and the user are evident in an artwork like HYMN (2008) installation presented during the Manifesta 7, inside the Ex Manifattura tabacchi in Rovereto TN).

In this installation, lyrically composed, the video is presented as an immersive projection, projected onto perspex glass, mirror and wood fragments. In a completely different way, in the Lago Morto installation (2009) for the Kunsthaus in Graz, the Lago Morto band tour, which took place in Vittorio Veneto in May 2009, is proposed with simultaneous videos on different monitors for a frontal vision. 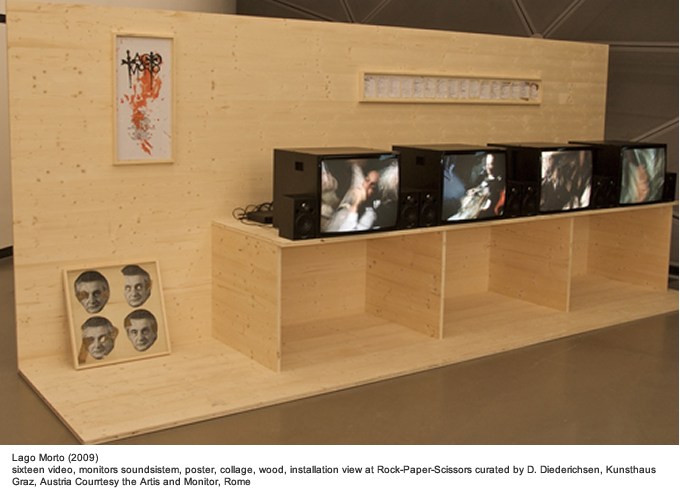