Darwin From The Microscope 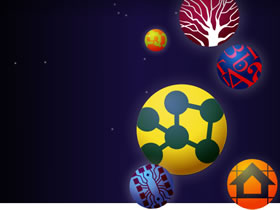 Darwin is turning 200 years old and we must admit that if we consider this period of time by the topicality of his scientific work, he doesn’t look his age at all. Although Italy is not celebrating him except for small events (a Country with a catholic scientific freedom) there’s someone like the National Research Council that with a number of Almanacco Science thought at least about mentioning the anniversary. http://www.almanacco.cnr.it/base_tutto_cnr.asp?ID_rubrica=1

I do not want to dwell on the debate creationists vs evolutionists, because there’s loads of good articles that can animate the discussion, and because I do not think this can further enrich the huge scientific heritage that Darwin left us. If one of the most interesting aspects of Darwinian theory is its contemporaneousness, however, it’s worth dwelling on those aspects that reveal the impact on society today, such as the ways in which it is accepted or rejected.

This was the main concern of Venla Oikkonen, researcher at the Christina Institute for Women’s Studies at the University of Helsinki. In her contribution Narrating Descent: Popular Science, Evolutionary Theory and Gender Politics (Journal Science as Culture, V.18, n.1 marzo 2009) has deepened and made more complex the idea of science popularization.

In fact one of the goals of scientific topics (even the arduous ones) is to go about under the form of a story: documentaries, news articles, radio broadcasts are an example. They are stuffed with stories of heroic scientists, molecular struggles of gay sea horses, and so forth.

As regards the Darwinian scientific discourse, some authors have focused their attention to the narrative forms thanks to which it became popular and how he generally influenced the cultural values associated with it (see e.g. Myers, 1990, Writing Biology : Texts in the Social Construction of Scientific Knowledge and Mellor, 2003, “Between fact and fiction: demarcating science from non-science in popular physics books.” Social Studies of Science 33:4 ).

According to Curtis (Curtis, R., 1994, “Narrative form and normative force: baconian story-telling in popular science”, Social Studies of Science 24:3 , pp. 419-461), the popular scientific discourse that follows narrative schemes is a powerful tool to promote a normative vision of science and at the same time to immunize it against criticism, a way to moralize the target audience while apparently it only seems to describe “facts” (and this tells a lot about the reason for creationist acrimony).

But H. Porter Abbott has described in detail the reasons of the unnarrable of Darwinian theory: first, the evolution is not a “good story”, even better it is not a story tout court, because the actors, that is the species, do not exist as a story unless they are described a posteriori , after their extinction or rather as long as they are on the verge of extinction. And the same applies to the evolutionary events which, although they are identifiable as well, a posteriori they are a strange combination of interdependence (variations on an evolutionary level shall have an effect on other levels) and independent (indirect causal relationships and the absence of intentionality). These are the two cornerstones of the famous model of ‘punctuated equilibria’ proposed by Stephen Jay Gould and Niles Eldredge, still one of the main points in support of Darwinian theory.

In other words, the protagonists of the story are always changing, there are countless, and this crowd is dominated by a blind mechanism of life, love and death without an intelligent design (in which the creationists believe, after all).

Oikkonen has led these considerations towards new purposes and has positioned her analysis mainly on the tracks of gender studies. In particular, she has focused on the pressures upon the evolutionary theory when this is made into a narration: on the one hand she studied the conventions of popular writing that privilege stories dealing with science and nature (such conventions are realized through narrative structures defined “family”, as plots of adventure, discovery and conflict), on the other side she wanted to put these “popularising” narrative devices into a conflict against a more productive textual research about the Darwinian scientific subject. The one by Herman H. P Abbott (see Abbott HP Herman, D., (2003) Unnarratable knowledge: the difficulty of understanding evolution by natural selection. Narrative Theory and the Cognitive Sciences) is certainly among the most famous in this sense.

However Oikkinen not focused, as Abbott, on the concepts that most were impoverished by the Darwinian theory, but she has studied in depth rather the opposite aspect, such as narrative devices that allowed the negotiation of the unnarratable to make it coherent and popularly recognizable.

To do this, she has undertaken a detailed semantics of two popular science texts well known, such as the one by Adam and Bryan Sykes Curse: A Future without Men and Natalie Angier Woman: An Intimate Geography that share the attribution of a crucial role to the “micro-narrative”, i.e. the world of microscopic entities (which could perhaps be better defined as “microscopic narrative”), of genes, chromosomes and gametes. With these two texts, Oikkonen wanted to suggest the possibility of a further dimension in the analysis of the evolutionary theory, an area that goes beyond species and organisms.

Oikkonen mainly distinguished four levels of effectiveness in micro-narrative, thanks to them the evolutionary theory was justified and accepted with a significant popularity. Briefly summarizing the first level consists in a sort of coherence and precision in the microscopic world of genes and organic chemistry, a kind of immortality that the species and organisms do not have because they are governed by the visible laws of mortality..

The second level has more to do with contemporary media culture: the visual charm of gene sequences, whose vision was allowed by the microscopic technologies has made DNA a fascinating cultural icon of our time, improving its development and arousing the interest from the early school age.

Third, as Lancaster and Roof emphasized (Lancaster, RN (2003) The Trouble with Nature: Sex in Science and Popular Culture ; Roof, J. (1996) Come as You Are: Sexuality and Narrative), the popular discourse on contemporary ‘evolutionism  particularly the psychological ones  have used a microscopic strong anthropomorphism linked to sexuality, which at times has reached the paroxysm of involving chromosomes X and Y directly in a miniature of masculine / feminine gender (the works by B . Sykes as well as Oikkonen’s analysis and Blood of the Isles: Exploring the Genetic Roots of Our Tribal History are emblematic in this sense). Those sexual attributes assigned to chromosomes have met a certain nostalgia for a binary sexuality, which is daily called into question. In this sense, maintaining clear boundaries between sexuality and behaviour has provided the micro-narrative with a sense of security for gender beliefs that deny the proliferation and the volatility of sexuality in late modern or post-modern society.

Finally, the fourth level is linked to scientific discourse itself, as it is self-justifying: the micro-narrative is more popular because it enhances science itself, but to do what is needed to stimulate feelings it must provide certainty and all this comes from the space dimension in which we are. Thanks to micro-narrative, the “inside organizations” in which we find ourselves, the vastness of science may seem “out” because it regards the inner being, inside species and bodies, and to a certain popular idea of “finitude”which is opposed to the complexity of the major current scientific theories, and because of this finite promote its acceptability with feelings of security and confidence in scientific research.

Oikkonen’s work, although not free from misinterpretations, has shown how the semantic analysis of works of popular micro-narration can reveal some mechanisms of science legitimation . A complex and no coherent at all theory, like the evolutionary one, can become popular through assertive patterns of trust, hope and patriarchal sexuality. The semantic analysis of popular scientific texts is clearly a very interesting tool for the understanding of contemporary culture.