One Step Away From History 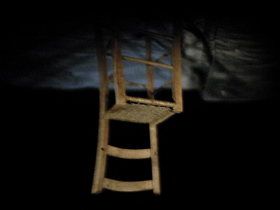 Teatro Lauro Rossi of Macerata, Italy , December 31st 2005. fifteen people. Three consecutive twenty-five-minute shows. Accompanied into the theatrical optic room set up on a stage, we sat down in front of a projection screen, which because of its closeness, appeared, to say the least, enormous. Surrounded by a black background while behind us loomed the separation curtain beyond which a space of five square metres for the act.

Complete darkness, an eighteenth-century silence and curiosity immobilised not only the body but also the mind. Then from the light room behind our backs, quite destabilising in their persuasion, movement and performing actions came to life that are meticulously illuminated and then projected onto the screen in front of us, obviously upside down and inverted. The story seemed to be one-step away: l’hic et nunc from unique existence and awe-inspiring in the place in which the work of art is fully manifested and unravelled, bur re-elaborated in a perceptive key and empathically shifted in the same instant in which it is created. The authenticity of the act is here both as historical testimony and authority that it is able to actualise in every new action the reproduced.

Orthographe de la physionomie en mouvement , is a show directed by Alessandro Panzavolta , who also takes care of the dressing and workings of the optic room, with the participation of a group of young performers among which Sonia Brunelli , Angela Longo , Sabrina Maggiori and Francesca Calafiore , without forgetting Francesca Pambianco in the role of scene technician. The Orthographe essentially concentrate on the research of scenic solutions around the elements of the optic room, which has as its first result the study n° 1 of Orthographe de la physionomie en mouvement , set up in the Museo Carlo Zauli of Faenza in May 2004. It was done with success, in collaboration with Inteatro, the Civic Center of Forlì, Italy and with the support or the Marche Regione, also at the last Biennale of Venice to then go into the theatres of a few Italian cities among which Modena, Milano and Macerata.

.We can admire this project in 2006 and precisely at the Teatro Comandino di CESENA the 3rd, the 4th and the 5th of February, and at the Teatro Rasi of RAVENNA Thursday April 20 and from Friday the 21st to Sunday the 23rd April with various repeat performances.

The artistic performance is presented to the public contemporaneously with the vision of the users themselves, live therefore, we assist to a soft and delicate, elegant and at the same time ambiguous vision; images without words, possibility of being discourse and absence of narration, that which is still not comprehensible is already iconographically recognisable. There are no sounds but noises. The same that come from the movements on stage, with tracks or wheels, from unbalanced walks, from psycho-erotic rubbing of the female body on probable beds. Or noises of suffocating breaths, of moved and used chairs, of twisted and thrown sheets, of imperceptible steps or of the bounces of the same bodies on themselves in a dance of the mind.

Those hysterical minds in the second half of the eighteenth century occupied one of the most important psychiatric hospitals of Paris, la Salpêtriere under the control of Dott.Jean-Martin Charcot , founder of neurology. The whole show in fact recalls the images (collected in photo albums of D.M. Bourneville, P. Régnard or Raymond Roussel Valmont or traceable in books like THEATRUM PSYCHOTECHNICUM – L’espressione poetica della persona – the poetic expression of the person ) of hysterical subjects photographed during their stay in the clinic; the portraits are mostly female figures, committed into the “epileptic quarter” where Charcot held his demonstrative lessons on hypnotism and the grand hystèrie, creating real show-performances with the young women as actresses. A gallery of bodies in plastic and reproducible poses, these mute icons will soon leave the anatomic theatre to take their place in the photograms of the first films.

There is no recording, no prediction, but only a thousandth of a second snapshot of the scene to the visual result on the screen. The “machine” cannot be seen but you can feel it. Our senses are compressed and multiplied, ready to suck the marrowbone from that optic room that imprisons us, that disorientates us if we wish it to, even if we know fine well where we are but not how we will perceive or how we will react to the next stimulus that will be given to us, that will be served in images, in anatomic representations, icons, symbols or unconscious flashes.

Panzavolta has created a mechanism “starting” from “the dark room” of Gian Battista Della Porta , Napoletan scientist and wizard that in his Magiae naturalis 1558 describes how to make use of the dark room to make a sort of artificial reality anticipating the art of cinema; appearance of sound images in movement, something that is no longer theatre, but not yet cinema. With the optic room one assists to what is defined as direct vision, a procedure still used today in photography with the so-called optic benches or mobile bodied machines; a complicated vision but a more truthful possibility of a reality that shows itself to be in this case nude and crude, historical and social, psychologically disturbed. It is an intertwining between documentary and stage show, between history and contemporary story, between authentic work and canonised authenticity, between the image’s place of origin and the place of the vision given here and now.

I would like to conclude with a brief but significant paragraph written by Walter Benjamin that emphasises a little the subject examined, highlighting how under stimulus the human beings elaborate and regenerate their own primeval and in this case also instinctive unconscious, thanks to the visions created in the optic room by the Orthographe .

” Evidently a different nature opens itself to the camera than opens to the naked eye  if only because an unconsciously penetrated space is substituted for a space consciously explored by man. Even if one has a general knowledge of the way people walk, one knows nothing of a person’s posture during the fractional second of a stride. The act of reaching for a lighter or a spoon is familiar routine, yet we hardly know what really goes on between hand and metal, not to mention how this fluctuates with our moods. Here the camera intervenes with the resources of its lowerings and liftings, its interruptions and isolations, its extensions and accelerations, its enlargements and reductions. The camera introduces us to unconscious optics as does psychoanalysis to unconscious impulses.”