The Screen And The City.continuous City Di Marianne Weems 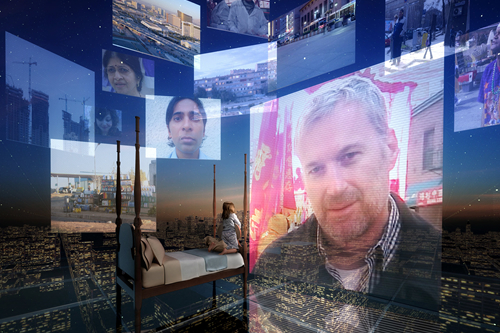 Marianne Weems, a theatre director of the multidisciplinary company The Builders Association continues with extraordinary coherence and strength through her acute examination of technology and communication via computers, in reference to their influence in society and their effects on social interactions.

In Jet Lag she criticised the media system and the “construction of information”; in Alladeen she criticised the effects of the globalised economy, with the workers of an Indian call centre who were instructed to erase their identity and their language and take on the American accent and culture. In Supervision Weems brought the nightmare of surveillance to the theatre, after September 11th: the citizens whose bodies have become transparent, “data body” in a “data space”, are subject to an alienating control in a “port private” society where the means of surveillance have become increasingly invisible and have penetrated into the meanders of the net.

In her most recent show Continuous city, Weems talks about an “interrupted city”, in other words the great worldwide web that allows for the passage through barriers, political frontiers and sovereign states and which has radically changed the face of the landscape and the experience of living in a city or in a global village, just as it has broadened the horizon of our human relations: the contemporary living landscape has become a mediascape, a place of “nomadic passage”, de-materialised as Castells says, into a “space of fluxes”, communicational fluxes. The city in the three stories that are told, is seen through different screens of different sizes (smart mob, pc’s and always-on) that compose a luminous intermittent set, a coloured kaleidoscope: they are fragments of a city that are presented as a puzzle (which definitely recalls Intolerance 60 by Svoboda) that releases residues of animated and noisy environments hung on the line of a connection. The father who works far away and talks to his daughter via Skype who is always connected to the Internet, telling her things through images, the characteristics of the city and he’s visiting, and she updates her blog on a daily basis where she talks about her views on the city. Emotions that are shared at a distance, the net as an “agile connective environment” (De Kerchove), bodies taken to a dimension without physical or geographical frontiers, in another place ploughed through by the web where feedback between transmission and reception is instantaneous.

The potential co-presence of bodies, messages, and images on the same communicative platform inaugurates a network of new relationships, a new social web that they in turn transform into an “ideal city” and a new “screen” dimension of living and inhabiting the contemporary. Today the projections in video pixels on “hyper-surfaces”, great screens on the walls of buildings (urban screens) used as live backdrops for concerts (like the Christian Fennesz concert and the visuals of Giuseppe La Spada: the artists in this case used an LED maxi-screen placed on the facade of the Palazzo dell’Arengario in the Piazza Duomo in Milano), the digital signs in a great format (digital signage) are a part of the urban landscape and reach enormous sizes (like the commercial maxi-screen of 24 metres put onto a blimp, visible from 4 kilometres away). The experiential size of public space, of the piazza through multidimensional screens, according to Simone Orcagni (“Il Sole 24 Ore online” 11-3-2009) connects to a more intimate experience, more individual, for like TV: “Media, urban planning, performance concur to create a new spectacular experience, which is also partly cinematic”.

What is interesting in Marianne Weems’s shows is the extraordinary capacity to dramatise some concepts that until now have been dealt with in essays on sociology of the media or cinema: the new public space, the panoptic, the new connective subjectivity, the culture of “real virtuality” (De Kerchove), the new electronic sociability. Key concepts like that of dislocation and deterritorialisation, just like those of presence and ubiquity, take the shape of a “mediaturgy” that places the protagonists like “vectors” of a content that is none other than, in synthesis, the big worldwide web.

Michael Klier in the film-video Der riese (1983), told a story of a city through images coming from surveillance cameras on buildings close to banks and airports to “grasp, undress and petrify pieces of space”, identifying, as Anna Lagorio says in her analysis of the video, “the generic city, de-personalised and anonymous”. In Supervision Weems comes to similar conclusions that come from the definitive subsumption of man inside a perverse mechanism of capillary control of his life that deprived him of his own identity.

The media nightmare described in Orwell’s 1984 materialises in a giant disconcerting screen which holds, like an identification badge from which the set takes it shape, an electronic track of actions and movements of the characters; persecuted by an invisible satellite eye that doubles them, prisoners between mirrors and transparent walls, in a proliferation of bodies that contrasts their solitude, the characters incarnate the psychotic nightmare of video-surveillance.

This is what Weems has to say: “We are surrounded by subtle and unseen forms of surveillance of the data we create as we move through our daily lives, and at the same time our identities seem increasingly to be constituted of data. What is the relationship between who we are and the cloud of data which surrounds each one of us? In post-9/11 daily life, we have come to accept, allow, and even encourage this new post-visual form of surveillance and its constant incursions into the realm of our “selves.“ What will the results of it be?”

If in Supervision Weems seemed to be bound to Paul Virilio’s philosophy and his “catastrophic but non-catastrophist” vision of technological modernity, in Continuous city there seems to be a pars costruens, an idea of shaped technology, domesticated and conformed to new communication needs and connectivity of society, accepting the renowned theses by Derrick De Kerchove: “The body, aided by the computer, comes out of its traditional limits, articulated around the skin. Therefore a body that is up to standard with the new potential of our mind is needed, so that it can also enjoy instant access to any part of the world, assisted by a computer. Our new skin is terrestrial atmosphere made sensitive by satellites”, and, “connective intelligence implies the possibility to share thought, intention emotion and projects expressed by others without crystallising them in the abstract fetishof a collective experience, or preserving them in the privacy of an individual”.

Therefore there are no more of Virilio’s “big optics”, that which unnaturally subverts our experience of physical distance and vastness of natural space (“the progressive derealisation of the terrestrial horizon,…resulting in an impending primacy of real time perspective of undulation optics over real space of the linear geometrical optics of the Quattrocento”), but a mediation of the world that produces an “extension of space of imagination, of pulsations of dream-like experiences, of games and symbolism to that of the architecture of living”(De Kerchove) as an effect.