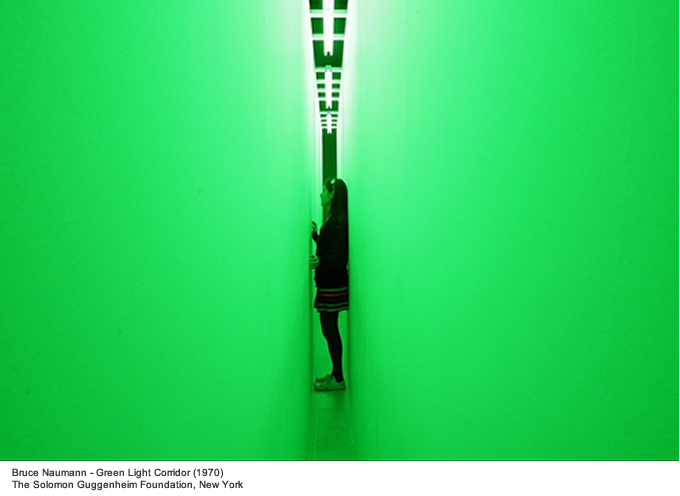 “Performance is more relevant than ever before, as art institutions grapple with ways to present historical material of live art and to respond to the multidisciplinary practices of artists working today.” – RoseLee Goldberg [1].

The exhibition Move: Choreographing You at the Hayward Gallery in London left me slightly breathless and over-excited. Curated by Stephanie Rosenthal, Chief Curator of the Hayward, Move is (yet) another participatory show at the Hayward, in that it “invites you to become a participant or even a dancer in installations and sculptures by internationally renowned visual artists and choreographers.” [2]

Move explores the relationship between dance and visual arts since the 1960s. The show features both historical works by major artists such as William Forsythe, Lygia Clark, Trisha Brown and Simone Forti, and new commissions by leading current practitioners such as La Ribot and Isaac Julien. 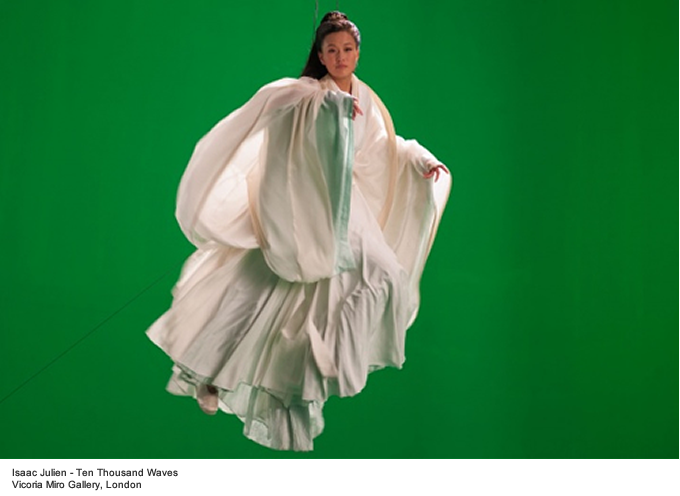 Upon entering the show, the first piece one encounters is Bruce Nauman‘s Green Light Corridor (1971). This is a narrow passageway saturated with green fluorescent light. It is so narrow that one cannot walk straight through it; instead, one has to turn sideways and walk in a crab-like movement [3].

This, in a way, is the entrance to the show: from the moment of entering, Rosenthal invites the visitors to consider how they negotiate space, and how they experience their body and movement in space. As a result, Rosenthal has curated a show that choreographs the visitors by affecting their movement. Through curating a series of works that require the visitor’s physical interaction in order to become fulfilled, Move raises one’s awareness of his/her body within the gallery space. In this show, the artworks are not set on a pedestal, and the visitor is not reflecting upon them from a safe distance. Instead, the works are participatory, interactive, open-ended or relational in different ways, and the visitor has to perform them or embody them in order to bring the show to life.

The exhibition goes on much the same way as it started. Lygia Clark‘s sculpture The House is the Body: Penetration, Ovulation, Germination, Expulsion (1968) invites one visitor at a time to enter a “birth-like” experience in a space with four rooms that I would describe as: dark, soft and unstable; full to capacity with white balloons; transparent air bubble; soft, wooly, and colourful.

Robert Morris‘s brilliant Bodyspacemotionthings (which first opened at the Tate in 1971) invite visitors to get on a plywood seesaw and a log, thus becoming aware of their body weight and how this can be redistributed in order to balance on those surfaces, alone or with others.

William Forsythe‘s excellent work The Fact of Matter (2009) is what the artist himself calls a “choreographic object” that “is not so much there to be seen, as to be used.” [4] The Fact of Matter is a ‘forest’ of gymnastic hoops hung from the ceiling at different heights, which visitors are invited to interact with. In attempting to negotiate his/her movement while hanging through hoops the visitor appreciates differently, or has the opportunity to reassess, his/her strength, weight, and body coordination much as a dancer does throughout his/her practice. 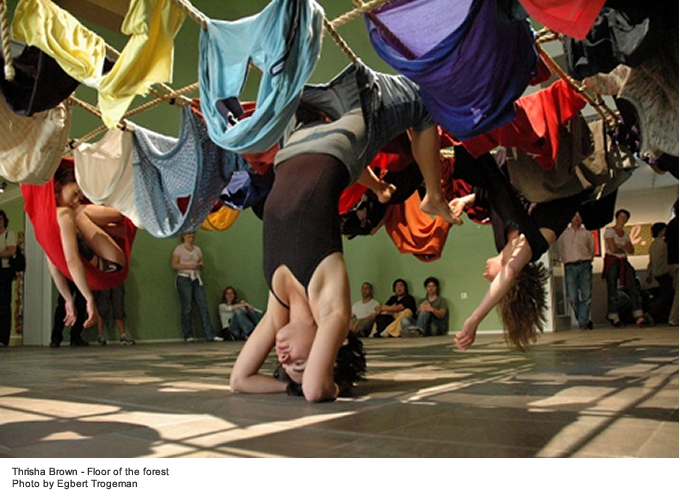 Other works that stand out in the exhibition are: Mike Kelley‘s Adaptation: Test Room Containing Multiple Stimuli Known to Elicit Curiosity and Manipulatory Responses (1999), a space that features a set of sculptural objects deriving from 1960s experiments in primate affection that one is encouraged to interact with; Simone Forti‘s Hangers (1961) where three dancers (or visitors) hang in the space through ropes, moving only by the impact created from passersby; Franz West‘s portable sculptures called Adaptives or Fitting Pieces (1970s) which visitors are invited to handle, getting themselves, as a result, into strange and often ridiculous poses.

Christian Jankowski‘s Rooftop Routine (2007, inspired by Trisha Brown’s 1973 Roof Piece) involving 25 volunteer hula-hoopers in New York’s Chinatown on screen, which the visitor is invited to hula-hoop with while watching the video (instructions and hula-hoops provided); and Isaac Julien‘s epic multi-screen film installation TEN THOUSAND WAVES (2010)  shot in location in China, Julien’s piece “explores the movement of people across countries and continents and meditates on unfinished journeys” [5] thus offering a very different, more subtle (and less dance-related), take on movement than most of the other works in the show.

The exhibition also features an impressively rich archive of relevant practices from 1959 until today. The archive, which has a strong presence in the exhibition and boasts efficient and attractive design by unit9, allows visitors to search works by artist, decade or subject matter. Rosenthal explains that the purpose of the show is to invite you, the visitor, to “look at art with your whole body and not just with your eyes”, and to “experience the works with your body and your mind at the same time”. [6]

Indeed, the exhibition achieves that: in the two and a half hours I spent in the show I observed all sorts of people physically interacting with the artworks (some of which are considerably demanding), from toddlers to mature adults, from dancers to people who, initially at least, were obviously uncomfortable stepping ‘on stage’. It is not completely left to the visitors to ‘move’ the show though: there are always 5 performers in the exhibition space that perform various pieces. Tied into the exhibition was also a plentiful programme of live performances and reenactments/re-interpretations by internationally acclaimed artists and choreographers such as Thomas Lehmen, Tino Sehgal, La Ribot, Rosemary Butcher, Siobhan Davies and many others. 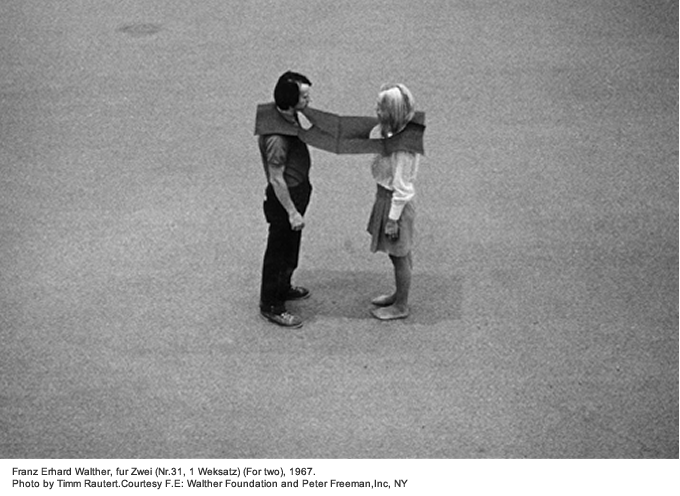 It is true that several of Hayward’s recent shows (most notably, Psycho Buildings in 2008) have been ‘interactive’, inviting the visitors to playfully engage with the works. Located at the Southbank Centre, one of London’s (and Britain’s) major cultural hotspots, the Hayward Gallery might well be under pressure to ‘democratise’ its programme by putting on exhibitions that can attract a wide range of visitors and appeal to families and tourists, as well as a more culturally discerning audience base.

If this is the case, then well done Hayward for striking a fine balance between the sophisticated, contextual and challenging on the one hand, and the playful, accessible and inclusive on the other. Move is an incredibly diverse show that caters for different tastes. The in-depth archive and subtle works like Julien’s film installation and La Ribot‘s evasive piece Walk the Chair (2010) happily co-exist with extrovert, ‘playground’ pieces like Kelley’s and Forsyth’s installations/environments. The curation is skillful, offering visitors contexts that encourage exuberant playfulness, public silliness and fun as well as works that are more inward, conceptually complex, intimate almost meditative in their nature.

Most importantly, all of those works confront one with the physicality, functions and limitations of one’s body, environment, and movement. Move succeeds in Rosenthal’s ambition to make us, the visitors, experience the works with our bodies not just look at it with our eyes often in a collaborative or shared context; while also allowing for occasions of quiet and private reflection. I want to particularly comment on how helpful all of the Hayward staff involved in the show were (they seemed to be having a good time too). 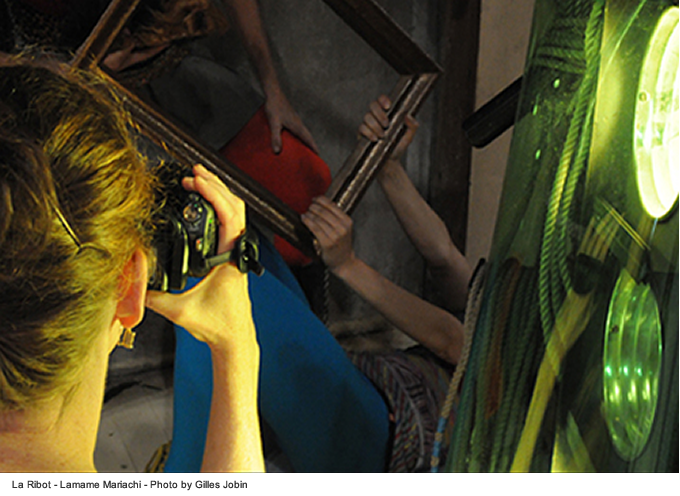 “No, it wasn’t a very good show”, said another (art historian) friend. “Not much essence to it. Of course, I went twice.” I laughed, and asked why did she go back. Did she enjoy it? “Well, I don’t think one should have such a good time at a visual art show!” was the answer. I found this illuminating could this be why interactive new media art shows are often cold-shouldered by visual art critics and art historians alike? Are they perceived as ‘virtual playgrounds’ where ‘too much fun’ is to be had for the works to be taken seriously?