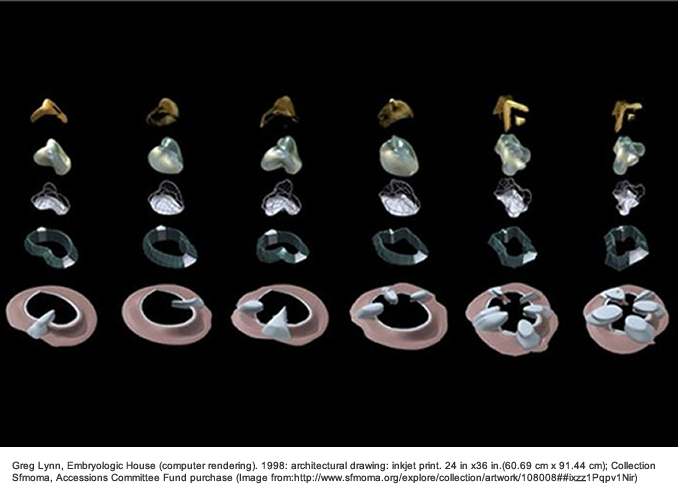 Having its roots in cinematic modes of presentation and spectatorship as well as in scientific simulation, data visualisation and statistics, the development of animation has been influenced by the paradigms deriving from these fields. Contemporary forms of animation enable an evolutionary endogenic design that is complex, transitory and emergent. The ‘spaces’ that are generated, differ from the outworn model of Cartesian space, that is, of a stable, ordered, inert, neutral and void space that is fully controllable through the use of Cartesian co-ordinates. Essentially therefore, the ‘spaces’ emerge from the fields of cymatics & Quantum Physics, the contexts of informationalism and connectivity.

According to the educator Dew Harrison,, the advent of hypermedia signifies the Postmodern shift in our thinking:”…connectivity permits an inter-feeding of knowledge symbiotically and simultaneously across the traditional formal mental barriers constructed in the Age of Reason, of step by step cause and effect deduction and the linear sequential theorising of classical science… Our Postmodern knowledge is out of sync. with the traditional methods of representation, the linear-sequential inflexible format of books and papers. A new medium of simultaneously presented depiction and multiple access points has become a necessity. Hypermedia is the new tool…” [1] 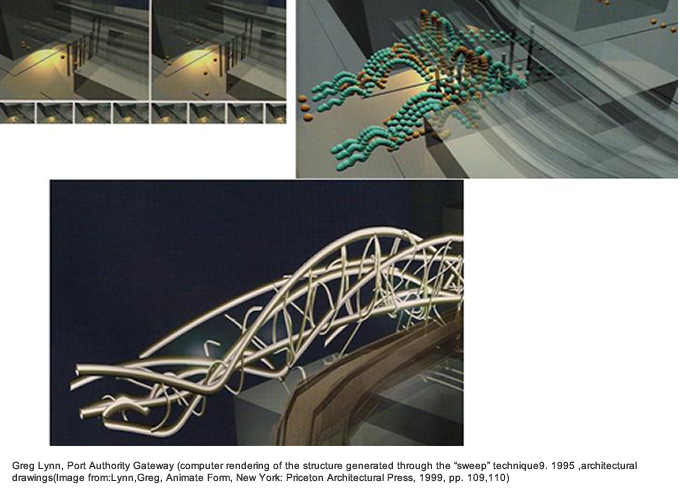 The new kinds of space emerge through informational fields & flows, they are dynamically multi-causal, nonlinear, relational, irreducible and incidental, as constants have been substituted with variables. Consequently those spaces conform neither to the notions of ‘ground zero’, singularity and objecthood, nor and the norms of Modernist abstraction and disciplinary autonomies.

The architectural designer, theorist and academic Greg Lynn‘s work is based on a creative investigation of the ways in which digital animation can be adapted as a tool for architectural design, through an in-depth engagement with the dialogue between architecture and animation and the ways the one changes the other. As we can see in Lynn‘s work, Computer Aided Design provides the opportunity to “retool and rethink” architecture, as “calculus-based design” is introduced. Such a digital tool enables the creation of spaces of emergence, through non-linear behaviour (interaction) and new kinds of geometry such as “motion or action” geometry, as termed by Lynn. [2]

The relationship between architecture and animation has not been settled, as it has gone through various phases of ‘negotiation’. The traditional discord between architecture and animation occurred not only due to the inert nature of the traditional forms of architecture, but also, due to the basic ‘protocols’ of architecture that dictated the creation of an essentially ‘eternal’ materiality characterised by stability, robustness, solidity and most importantly, as Lynn explains, “flat-earth stasis”, formal purity and autonomy. [3] On the contrary, digital animation was readily adopted as a suitable design tool in other fields including naval and aerospace design. In these fields of design space is conceived as a dynamic environment where there are irregular interactions between various kinds of force and motion. 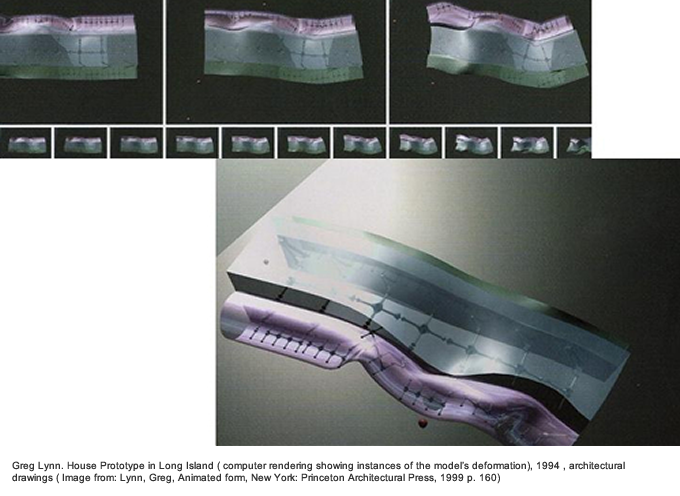 Greg Lynn clarifies what has been the most important aspect of such a design mode that has changed architecture, as follows::“…form can be shaped by the collaboration between an envelope and the active context in which it is situated….”. [4] In this way, interstitial spaces emerge while mapping environmental dynamics. New architectural forms can be thus, created and transformed in various indirect ways

It was precisely this opportunity that challenged the established architectural theory and design due to which, the role of digital technology had been misunderstood. Architecture is no longer conceived as a neutral and static ‘frame’ that is devoid of motion and force. In fact, since forms ‘store’ time, motion and zones of influence, they do not function as mere visual elements. As they are emergent, these forms cannot be reduced to pure/essential forms, but they stem from an unsettling, as Lynn puts it, “multiplicity… a stream of relative values”. [5]

Such a design is based on parameters and statistics, and enables a spatial morphogenesis in a non-Euclidean ‘environment’. Through the use of calculus-based tools, architectural design may become more abstract and less representational, at least in comparison to its traditional and standard types of predecessors. [6]

Greg Lynn‘s work is a characteristic case of how a challenging dialogue between architecture and animation can be creatively developed for designing architecture, through what can be defined as operative ‘tracing’. In his exploration of maths as a topological medium, Lynn develops a systematic approach to digital technology. As Lynn describes: “The failures of AI [i.e. the “mindless connections between variables”] suggest a need to develop a systematic human intuition about the connective medium, rather than attempting to build criticality into the machine…” [7]

Instead of uncritically assuming that all things can be achievable through digital technology, we need to understand its true workings and limitations in order to critically and creatively adapt and use technology for advancing design. A different kind of thinking and skill can be developed, inspiring a new type of creativity and engagement with space. 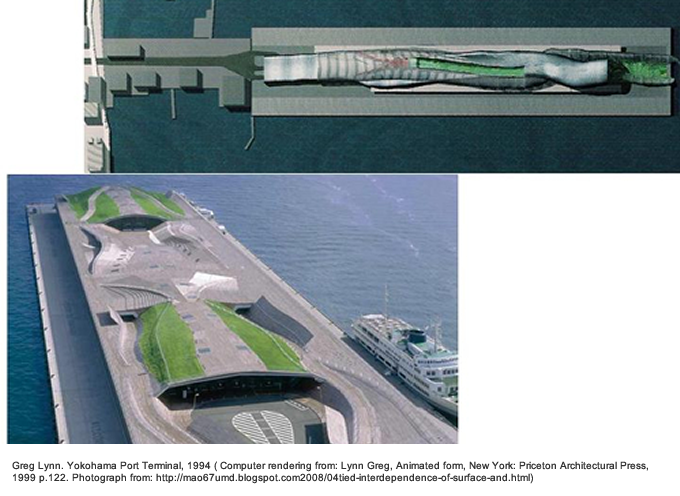 Operative ‘tracings’ can be found in Greg Lynn‘s architectural designs the creation of which, has been inspired primarily by the elements of flow and passage. The core aspect of those projects is “phase space”, that is, a deep dynamics space of “active interactions”. Phase space signifies the shift from “autonomous purity” to “contextual specificity”. Such a space cannot be idealised in a Cartesian fixed and abstract environment, because its ‘instances’ emerge in a gradient field of potentiality. Lynn’s design is realised through the use of a spatial system in which topological surfaces are defined by the “vector co-ordinates” U and V, instead of the Cartesian co-ordinates X, Y and Z.

In addition to the spatial system used by Lynn, phase space is revealed through a truly endogenic mode of animation, as opposed to cinematic special-effects. In particular, the design is realised through site-mapping and passage flows with the use of sweeps, particle dynamics and splines. [8]

As one of the main characteristics of Lynn‘s work, the element of virtual trace (also defined as imprint) is ‘stored’ in the digital topologies. The virtual trace is also “recorded” in the configuration of the designed building in the form of “multiple historical ground conditions” that are simultaneously present. [9] The spaces that occur in these “ground conditions”, can be defined as interstitial.

The 2008 Venice Biennale of Architecture Winner, defines these interstitial spaces as generative “intervals”: “The intervals between the moments that are superimposed generate irresolute conditions which are exploited for their destabilising effect on the present..” [10] 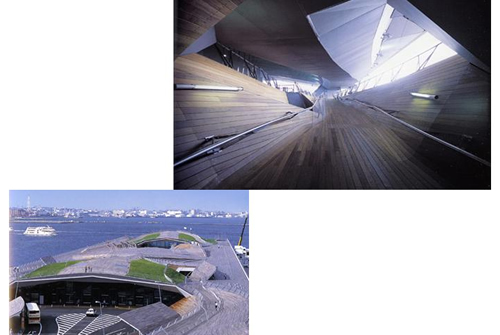 These intervals may take the form of unsettling ” transitional spaces between exterior and interior”. These spaces may have “composite surfaces” where potential and influences are not eliminated, integrated, absorbed or resolved, but stored. [11] In Yokohama Port Terminal, for example, those spaces have been created from ‘skin shifts’, while the various interacting site forces have been ‘translated’ onto the surfaces of House Prototype in Long Island [12]

In Greg Lynn‘s work we can find various methods for designing space through a diverse range of complex indirect transformations, the outcome of which, is not limited to mere visual phenomena. As Lynn describes, deformation is an “index of contextual forces” that include various ‘gradient parameters’ such as those of decay, wave behaviour, attraction, density and others. The resulting transformations can be called indirect.

As Lynn explains: These parameters affect objects as numerical fields of forces than as object transformations [13]

The structure and form of space emerge through the “collaboration of enfolding a context and unfolding an object”. [14] Space is designed through a dynamic interaction between micro and global landscapes, where virtual force and motion are stored in “curved gradient tectonics”. A form becomes a complicated and evolving site where multiple forces that operate through, over, under and around surfaces, are calculated. Consequently, what we call “primitives”, that is, the basic building blocks of a digital 3D model such as a sphere, a cube and others, are in fact, “blobs without influence”.

As the architect explains, although such a “blob” appears to be an “exact form…. complexity is always present as potential in even the most simple or primitive of forms””. [15] 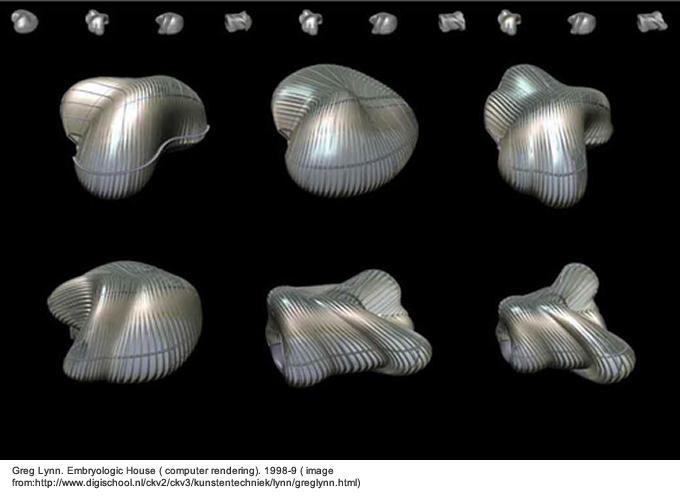 Lynn‘s design methodology does not only challenge the existing relationship between architecture and animation, but also, the status of architecture as a physically realised end-product in its conventional form, as well as the ways of presenting design processes, outcomes and their relationship. Traditionally, even the most contingent transformational sequences fundamentally differ from any operational drawing, because they can finally be ‘edited’ as a singular image, that is, an index of the transformation processes used, in order to be ‘exteriorised’ as a new built form.

Consequently, a transformational sequence still belongs to a standard linear architectural production that has a predetermined outcome i.e. a useful building. Contrary to such singularities, Lynn‘s work concerns instances that present an environment of potentiality instead of a varied fixed prototype. [16] His designs have been presented to the public also as physical prototypes, full-scale models and animation. [17]

Lynn’s work continues being operative even after it is ‘finished’, opening up new possibilities for augmented, responsive architecture and beyond.