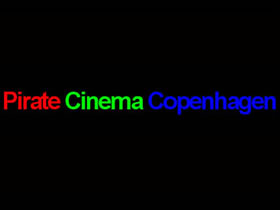 The Film industry’s war against pirates is a war against reality. These is the manifesto of PCC-Pirate Cinema Copenhagen ( www.piratecinema.net ), a project founded last year in the Danish national capital.

Il Pirate Cinema Copenhagen follows a lucky track first followed in Berlin in July 2004 by Pirate Cinema Berlin , conducted by Sebastian Lütgert and Jan Gerber. This lucky track is nowadays composed by many stone-networks of independent cinemas, gathered with the common aim of making available and free all the films difficult spreading and, above all, copyright protected films. Since 2004 up today, the Pirate Cinema’s network has widespread, giving birth to new projects not only in Berlin and Copenhagen , but also in Stockholm (www.piratbyran.org), Oslo ( www.piratecinema.no ), Paris , Amsterdam , London , Graz , Rostock not to mention Tarifa and Tanger. The statement at the opening of the local Pirate Cinema as well as the interview with Mikael of the Pirate Cinema Copenhagen explain that the idea of creating a citizen pirate cinema is the critical answer to a more and more restrictive cinema industry. Its main objective is to convey everybody what is considered as a collective good, that is to say the right to copy and hand out intellectual achievements, making them available and for free and overcoming the old-fashioned idea of intellectual property.

This is a strategy to fight against a image control politics, a more and more strict politics whose previous ones teach something. Let’s go back to the 80s when the game industry claimed the impending end of the videogame era because of the game floppy copies. But even before that, they were the days in which the use and reproduction of music cassettes meant the music industry’s crack. Time showed it was not true and on the contrary the more video or musical products were circulating and spreading, the more the cultural imaginary grew wider and requested other products of this domain.

The Pirate Cinema’s several projects are a real reply and regaining possession and opening of new channels for the free diffusion of knowledge. In this network the right of reproduction and availability to information is one among its prominent aims. The network seems to be very fruitful in the Scandinavian area, where projects like The Pirate Bay (thepiratebay.org) or the Piratgruppen (piratgruppen.org), had a favourable result. The first one is a free download platform for music, movies, software and games, whilst the second one is an independent collective project fighting for freedom in knowledge.

So it should not surprise that the project Pirate Cinema Copenhagen found a seat in the Folkets Hus (that is literally to say the folk’s house www.folketshus.dk), in Stengade 50 . It takes the place and the role (as hero) played by the Ungdomshuset (literally: the young house, a building occupied by young people), settled in Jagtvej 69 and destroyed in last March after a heated long-day riot with the local police.

Folkets Hus is in Nørrebro , that is also the neighboorhood of the Ungdomshuset. As well as this latter, the Folkets Hus has a long citizen tradition as it is part of the urban renewal started in the 70s. This project’s goal was the creation of green areas and recreational facilities for the local working class. During the years, Folkets Hus hosted several collectives. Among them we remember the famous TV STOP (1987-2004) , an independent Danish TV sender important for its activist soul. Now the Folkets Hus is the seat for different groups, from the collective TVTV ( www.tv-tv.dk ) to Radio 69, and from dance and bio-cook associations to the already mentioned Pirate Cinema Cph.

Tatiana Bazzichelli: How did the Pirate Cinema Copenhagen come up?

Mikael: Pirate Cinema Cph was born last year, it was the summer 2006. We took inspiration from the Pirate Cinema Berlin , a very useful project both on local and international field. We thought that the “copy” could give interesting results, and so we thought to start an independent film making also in Copenhagen . We did want a challenge with the concept of copyright and intellectual property, deciding alone and with no constriction what we wanted and could see at cinema. We show only “pirate-movies” obtained by file-sharing and p2p. That’s why we regularly confront with issues such as free access and diffusion of cinema contents, and their free distribution and reproduction. For instance we use to give all people in the cinema a CD-Rom with the movie at the end of the projection in order to let a chain distribution.

Mikael: Our intention is to give continuity to this project, and this means not gathering for pirate cinema once a month but once a week. We want only to show pirate movies and in our web site you always find a link for the download of the new movies, so that people not present at the projection have the opportunity to watch it. whoever comes here gets free copies and of course they can copy the movie on their turn. We get all the movies through file-sharing channels, but actually there many other ways.

For example once a year in Copenhagen it takes place the CPH:DOX, Documentary Film Festival ( www.cphdox.dk). In spite of its valid program, it is usually strictly controlled by copyright. We have a look and search for anything interesting and then we get it through filesharing. We try in this way to have a mix between what actually happens in the city and showed locally and what we can find on the web. Of course everything shown is for free. We try to gather the everyday coping files and watching movies with the free reproducibility of contents. Everyday people copy materials, it is no wonder. We just drag it into the light and make it an “obvious” process, reproducible on its turn. Everybody can get the movies we own and s/he can copy them. It’s like broadcasting a “social event” derived from a praxis of copying and reproducing pieces of knowledge and materials. We don’t ask people to bring CDs to get a copy of the movie, we already dispose of ready copies available for the public, and we sustain this proposal with our own finances.

Tatiana Bazzichelli: Which is the Pirate Cinema Cph’s program? Which are the criteria for picking up movies?

Mikael: What we most appreciate from file-sharing is that we can get movies not available on a large scale. Or hard or even impossible to find and buy. We usually offer rare movies or representing an interesting political content. Sometimes we choose movies to have fun, like the Hollywood movies that you find at the cinema or you will find. We try to offer different kinds of movies in our scheduled programme. The movies distributed by cinema are usually anticipated by a “screening copy” handed out long before the projection of the film. In the file-sharing you often find the reproduction of this version, also 2 or even 3 or more months before the official distribution.

Tatiana Bazzichelli: Lets consider the activist scene present in Copenhagen , drawing much attention after the Ungdomshuset closure. Where does Pirate Cinema has seat in this network? Does sharing spaces with other collectives and associations in the Folkets Hus is your political choice?

Mikael: From one hand being in the Folkets Hus was a political choice, but we have to say that at the beginning our project was born in a commercial environment. Everything was pretty good, although the group hosting us was a bit disappointed because they thought we could be an economic help. Their expectations of people buying several drinks at the pub or having parties after being at the cinema were disappointed. People actually came to watch the movie, drinking perhaps a couple of beers and then came back home. We hadn’t got that kind of expectation. We don’t earn through pirate cinema. Entry is free, there’s no ticket. For us it was better to work in an independent environment such as the Folkets Hus. Folkets Hus has got a long tradition, it’s an occupied building but it’s not officially illegal. There are many groups taking part to it, they use the rooms for their projects but we don’t pay the rent, just some energy bills.

Tatiana Bazzichelli: The word “pirate” has a very strong evocative power in the city. I’m thinking for ex at the symbol of Ungdomshuset 69. I noticed that this is true for many other Scandinavian cities, Oslo is one of them. There you find the pirate skull as main icon of several independent places. In Italy people belonging to the so called “hacker scene” do prefer not to consider themselves pirates because this word usually recalls a negative meaning. What does the word “pirate” mean in the Pirate Cinema di Copenhagen project?

Mikael: The word “pirate” submits a change in meaning in this context. It was re-designed, re-evaluated. And not only in Copenhagen . Just recall the Swedish project The Pirate Bay and also the Swedish Pirate Party ( www.piratpartiet.se ) or the Piratgruppen in Denmark . All these projects change and claim for the word “pirate” because deep in our hearts we are pirate. And our work is piracy. It is a kind of regaining possession of the word while we give it a new context. Actually, the new meaning is its original one, despite the fact that there are people who don’t agree with piracy because they don’t understand, don’t use it and don’t see a purpose in it.

Of course during this process of regaining possession, the word changes meaning, loosing its commercial feature and gaining a positive value. I think it is a good mirror to check how people are moving and relating to these themes in North Europe , above all in the Scandinavian countries. Also the so called illegal raves here in Copenhagen have become pirate-parties for some years and the skull is today a shared icon for radical culture. According to us being pirates means measuring ourselves with the concept of intellectual property, also in image terms.

Tatiana Bazzichelli: And the future projects of Pirate Cinema Copenhagen?

Mikael: At the moment we’re having summer break, but we will start to work soon. We are thinking to realise an open air cinema and create a new festival. By the way you can find all the news in our website and get them periodically if you subscribe our newsletter.