The Artist As Artwork In Virtual World – Part 1 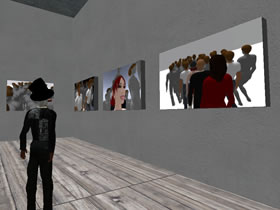 In the last years, we saw an increasing development of artistic activities in virtual worlds. At the beginning, these virtual worlds were just game-places (MMORPG) [1] or communication tools (chat, MOO, etc…) [2] , and included art as a mere peripheral issue, that was seldom supported and often refused by other users.

It was due to the fact that the purpose of these worlds was different, but also to the lack of the necessary tools for the development of artistic practices and of points of reference. For this reason, art in virtual worlds used performances as its own means of communication: improvised events, that are often forgotten (but constant) in those worlds and that adopt the players’ communication tools to convey a message.

I know only one “constructive” example of architecture in virtual world by an important artist in 1997: Lawrence Weiner. Weiner was consulted by an ada’web for an online project, and decided to focus on the idea of Internet as a public space, exchange and communication tool, that needed to be reinvented. He brought into the virtual space his famous statements and his unique way of using physical space of galleries and museums. Ada’web staff, a new media venture launched three years earlier by the curator Benjamin Weil, decided to work with Palace , a three-dimensional chat that in the 1990s seemed to be a great success. Through Palace, users can create, design and furnish their own thematic “palaces”. In collaboration with ada’web and during his exhibition at Leo Castelli’s gallery ( then, now & then , February 15 th  March 15 th 1997), Weiner launched Homeport , a “palace” that represents in Palace virtual space the white cube of the gallery, covered with symbols and writings. The program users can use this space as a public space where they can meet and chat.

Palace still exists, but Homeport is not available anymore. But what wasn’t successful was the idea of including artists in virtual worlds. After Homeport , that wanted to leave a mark on the synthetic walls of a virtual world, Palace had to do it illegally. In 2002, the American artist and curator Anne-Marie Schleiner leaded a group of artists (Brody Condon and Joan Leandre) in the development of Velvet-Strike project, hacking of the popular online shooter video-game Counter Strike (1999) [3] .

hey invented pacifist spray cans that all users can install on their own game version and use to write on walls, during the shoot-outs. Anyone can work on the project by creating new graffiti, using the already existing ones and reporting the raids in Counter-Strike . The three authors, video-games fanatics, while George W. Bush was promoting the fight against terrorism, began to think about the borderline between real and fake violence, and about the propagandist use of video-games. If reality enters video-games, video-games can become political debate spaces; however, this idea didn’t seem to be successful among Counter-Strike players, that blamed the group of artists for repeating old critics about video-games, without understanding the real nature of video-gaming.

Also the American Joseph Delappe tried several times to bring the political debate into virtual worlds. Since 2001, Delappe organized some performances inside on-line video-games, public places where you can address a general public, not just an artistic one. Delappe mostly uses the textual chat in the game in order to sabotage the game itself, by introducing new issues, new themes and new stories.

In War Poetry , for example, in the on-line shooter video-games you can find poetical texts by some war veterans, introduced as authentic recitals; in Quake/Friends (2003), Quake III Arena becomes the set of an episode of the popular tv show Friends; in The Great Debates (2004) we can find the three famous tv Bush-Kerry confrontations in different game-sets (from Battlefield Vietnam to The Sims Online); and in dead-in-iraq (since 2006), America’s Army (the online video-game developed by the Pentagon with explicit propaganda and recruitment purposes) was introduced to show to the players the list of the names of the dead soldiers in Iraq from the beginning of the war until now. But it has been almost impossible to complete the list: the other players killed it before the end of the performance.

If, on the one hand, Delappe sometimes succeeded in promoting a genuine political debate also in the online shooter video-games, on the other hand in the chats and MMOGs without any game connotation it becomes possible to develop artistic projects in a constructive way. Mouchette, the popular virtual character of the 1990s, played herself, and the project’s themes (sensuality, death, sexuality in an immaterial world) are discussed in her textual chat-room and in some graphical contexts.

In 2004, Katherine Isbister and Rainey Straus launched the SimGallery project, that brings into The Sims Online the exhibition space where the project is presented. They wanted to analyze the effects of the combination of high culture with gaming culture, but also the aesthetic features of virtual worlds, and to understand what can be the future of art in virtual worlds. The project was innovative because it took advantage of the chance of manipulating objects and spaces and because it was aware of the existence, in The Sims Online , of an increasing community of artists or art-fans. However, even though these artists spread a “call for entries”, the project has never become a real “art gallery”.

And The Sims Online, unlike Second Life, has never become a real art experimenting platform.

Second Life (SL) was launched in 2003 by a small and visionary Californian company, that took its name from its address: Linden Lab . We could explain its success as an artistic environment in different ways, but I think there are two valid reasons. The first reason is explained in the preface by Matteo Bittanti to Second Life , by Mario Gerosa (2007) [4] : “Second Life is a mixture of heterogeneous practices and techno-social phenomena: virtual reality, open source, creative commons, Web 2.0 and MMOGs”.

Second Life has much in common with the on-line games, but it’s not a game. Like many Web 2.0 platforms, it mixes community activities, creative tools and sharing tools. It depends on the creative actions of its users, and considers them as real copyrights. It sets up a meritocratic society, where aristocracy is made up of those people who can surprise the others thanks to the quality of their job (of course, the monarchs are still the Lindens). It uses some basic Web features in 3-D contexts, and many consider it as the first step to 3-D Web. “It is better than Microsoft Office”, once an artist said. “Here, at least you have a body…”.

The second reason of its success was suggested by Philip Rosedale, the creator of Second Life , in a recent interview with David Kushner [5] . Rosedale explains how the idea of Second Life became something concrete during Burning Man, a performing arts festival in the Black Rock Desert of Nevada. Rosedale detected a “magical social construct” and he tried to bring it into his virtual world: “Burning Man is wondrously purposeless… It asks you not to have a reason to be there. You think you could die out there, and you could die. It gets colds, the wind comes up on you. You’re brought together by a need to protect each other in the harsh environment. People are brought together by their desire to help each other through it at the beginning… Burning Man is Second Life”.

Second Life uses all this as its main resource. Second Life is not just a virtual world: it is an “art world”, as Howard Becker said: “the network of people whose cooperative activity produces the kind of art world is noted for. Its members coordinate the activities that produce the work, using conventional concepts of the common practice” [6] .

In Second Life, art is produced, exhibited, commented, sold and collected. It is available in different ways and kinds, and it gets in touch with other communities and other systems: avatar architecture, design and projects. There is a furnishing art and a research art. Performances are still the most important elements: besides “pure” performances, in a virtual world every art activity has a performing value  sculptures can be animated, while architecture and buildings are often sensitive and multimedia environments, that users have to explore.

[1]Massive(ly) Multiplayer Online Role-Playing Game. are a genre of computer online role-playing games in which a large number of players interact interact with one another in a virtual world. Players assume the role of a fictional character and take control over many of that character’s actions”. From Wikipedia, http://it.wikipedia.org/wiki/MMORPG

[2] “MOO (MUD object oriented) is a text-based online virtual reality system to which multiple users (players) are connected at the same time”. From Wikipedia, http://it.wikipedia.org/wiki/MUD_Object_Oriented

[3] Counter-Strike is a popular multi-player shooter video-game, originated from a Half-Life modification by two university students in 1998. It was later developed by Valve Software, and its success is due to the fact that it is published as a free mod of Half-Life, uses its graphic engine and you can play it on-line. From Wikipedia, http://it.wikipedia.org/wiki/Counter-Strike. Il sito ufficiale del gioco è http://www.counter-strike.net/

[5] David Kushner, “Inside Second Life”, 2007, available on the Internet at
http://www.rollingstonemagazine.it/page.php?ID=579