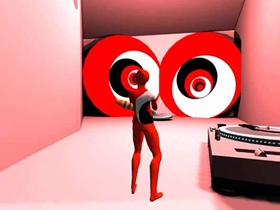 The love affair between art and videogame has a long history at his back, which could be dated back in the mid Nineties. A series of shows and publications sanction, along the years, stability, and yet the news of their marriage reaches us as a surprise.

It is difficult, in fact, not to see a jump of quality in the organisations, during those months, of three events of high level which express, in different ways, the point on this event. The 7 th of October MoMA of New York will propose in worldwide review the documentary 8 BIT: A Documentary about Art and Videogames (Mutationengine 2006), presented by the curator Barbara London : ” 8 BIT chronicles the relatively recent history of video game-based art, but also suggests that the bit-bending antics of the post-video game generation hint at a new current in the uncharted waters of 21st century art history.”

In the cast artists of the calibre of Cory Arcangel, Mary Flanagan, Alex Galloway, John Klima, Eddo Stern and Carlo Zanni , while the soundtrack is by some champions of 8 bits music : Bodenstandig 2000, Gameboyzz Orchestra, Nullsleep, Role Model and teamtendo.

In Oldenburg , Germany , continues up to the 5th of November the show Playback_Simulated Realities , on simulation themes and “re-enactment”, the re-proposal of events and actions of the recent past. Housed by dith Russ Site for Media Art , the show includes, among the others, the exceptional couple Beate Geissler / Oliver Sann and Lynn Hershman, Felix Stephan Huber and Eddo Stern

The seventh edition of the medi@terra festival, in Athens , will take place on the 4th and the 8th of October , entitled Gaming Realities devoted to the complex relationship between artistic production and videogames. Medi@terra made a name of itself along the years as one of those little peripheral events you can’t miss. A long work of research and the organisation of an expert committee- participating actively to the selection of proposals- produce a four-day of conferences, screening, events and a show which this year counts on 30 projects.

The accuracy of this work of research gives the event the capability to emphasize some ongoing tendencies within this sphere of activity. A not very virtuous tendency, but able to produce occasionally results of interest, trying to revitalise the heavy tradition of the interactive installation at à a Ars Electronica developing its ludic dimension. A good example is Grid Chase – The 5 Dance Pad Project (2002) by the Greek artist Dimi Christopoulos , whose most important virtue is the low cost and DIY approach he uses to introduce himself within the dance pad genre. Game mods and game patches prove to be able to produce high level works-such as Philosopher Death Match (2006) by the American Benjamin Chang , a patch at Quake III where the player discusses with the great thinkers of the Occidental tradition or Nowhere – ein welt raum spiel (2004) by the Austrian Sylvia Eckermann, Gerald Nestler, Christof Cargnelli and Oliver Irschitz , a sort of abstract evolution tending to the mysticism of the interface Unreal  and even authentic masterpiece, such as Max Payne cheats only by Jodi.

Anyway, the hacking of existing videogames is far from being the main artistic comparison strategy with the video- ludic means. Videogame seems to be, according to artists, less and less a tool to be de-built, and more and more a medium to be re-built, reformed. Just think about the anti-advergame genre, here represented by the McDonalds’s Videogame (2006) by Molleindustria and by Disaffected! (2006) by the American team Persuasive Games : games destined to a viral diffusion in the web, overturning the promotional perspective of the advertisement games produced by societies revolutionising their game-play.

More and more frequent are the more consistent productive efforts cases, aiming at developing quality products destined for being sold among commercial products: a genre here well presented by Darwinia (2005), sophisticated and original work by the English team Introversion Software which has already become a cult tool among video players. If Introversion Software, as the French Lykno , the Dutch team Taleoftales and the Danish Serious Games Interactive authors of a game about the Palestinian conflict-trying to renew from the inside the mainstream videogame languages, other groups study alternative strategies of game design: moving the game field in the urban tissue, such as the English Blast Theory with Can you see me now? (2001), winner of the Golden Nica for Interactive Art in 2003, or the neo-born Ludic Society with Ready Played (2006), a project reinterpreting parkour in the French suburbs in a videogame; turning videogame into a vjing tool ( Postvinyl by the English Mathias Fuchs ) or musical production Fijuu2 by Julian Oliver and Steven Pickles ); opening videogame to the creative intervention and to the collective elaboration of users, such as Personal Cinema did with The making of Balkan wars: the game (2004) and the Spanish collective with the project Bordergames , which through a series of workshops is putting at young emigrants’ disposal a videogame engine and the tools necessary to draw it, but especially trying to make them aware of the importance of handling new technologies.

Some artist games experiment within classic forms, such as the adventure genre on which work the Austrian Monochrom in Soviet Unterzogersdorf (2005) or the god games genre by the Serbian Eastwood Group in Civilization IV  Age of Empire (2004); other experiment narrative and ludic alternative strategies, such as “the interactive drama” of Façade (work by the American Michael Mateas and Andrew Stern ) and the exclusively textual game play of Book and Volume (2005) by Nick Montfort , him too American.

A further merit of medi@terra consists in having approved, if yet it needed it, the importance of the genre of machinima , asking the founder of machinima.fr Xavier Lardy to organise a short anthology (we remind you the neo-born Festival of the Cinema in Rome will devote a review to this genre in the section “extra”). Born for the need of video players to document their own performances within game environments, machinima (machine + animation + cinema) are movies shot within game environments with direction tools put at everyone’s disposal by the game platform itself.

From the initial do- it- yourself-approach they have quickly become actual productive realities, of a distribution circuit, and even game development- as The Movies  conceived with the exact purpose of becoming a platform for machinima productions. The Lardy production includes one of the “cinematographic cases” which contributed to the popularity of this genre, The French Democracy (2005). Shot by the French director Alex Chan inside The Movies, this movie is a narration-reflection on the reasons which brought to Paris outskirts burning : an attempt to make the rebels’ reality( and their eternal dissatisfaction as second-class citizens) emerge in a phase in which violence condemnation was unanimous. Particularly juicy were the conferences, especially those on the 8 th of October, devoted precisely to game art, with the intervention of Julian Oliver (fondatore di Selectparks), Xavier Lardy, Margarete Jahrmann (fondatrice di Ludic Society e artista), Gonzalo Frasca, Laura Baigorri (autrice del seminale Game as Critic as Art), Auriea Harvey & Michael Samyn.