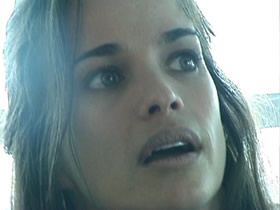 Created by Woody and Steina Vasulka in 1971 as an artistic association and privileged space for video and vanguard music experimentations, The Kitchen in New York remains one of artistic experimentation contemporary hot spots. Its programming ranges from multimedia to performance, from concerts to lectures and offers a various landscape of new trends. During the years the centre entertained such artists as Vito Acconci, Gary Hill, Kiki Smith and the ones who are now part of the directive board, for example Laurie Anderson, Philip Glass and Meredith Monk .

Since last year the direction of the centre has been entrusted to one of the most interesting promoter of the moment, Debra Singer , who co-promotes the last Whitney Biennial.

In September-October of this year The Kitchen presented the last Dara Friedman work, a two channels video installation entitled Sunset Island , promoted by Ali Subotnick (co-promoter with Maurizio Cattelan and Massimiliano Gioni of the Forth Biennial of Berlin). A young but not too young couple, a man and a woman of stereotyped beauty (the man is the Italian macho type and the woman the Brazilian soap-opera starlet type) move into similar but separated spaces and they ask themselves a series of questions ranging from existentialism to triviality. “What will become of us? Are we alone? Are you like my mother? What’s this smell?…”. Words chase one another from a screen to the other, from an environment to the other, without creating a logical connection and without creating any interaction between the two protagonists that seem to have the camera as their only interlocutor.

Dara Friedman (1961) was artistically trained in Germany , her native country, and in the USA , where she now lives: in her works a basic structuralism  that brings to use repetitive and synchronised sequences without exceeding in purisms  and the influence of the American show system stratify. In particular the video and audio repetition is a fundamental characteristic of her production: on one hand  she declares  hearing a person talk can reveal more about him than his image; on the other hand repetition has an antinomy value because it can underline a message or on the contrary it can underplay it diminishing the quantity.

In Sunset Island Dara Friedman adds to the repetition-system a strong unnatural sense: from the title of the video  that recalls one of the most exclusive areas of Miami  to the interiors full of flowered or cream-coloured furniture to the stereotyped and artefact beauty of the two protagonists that could have had a relationship or they could have simply read a storyboard and then acted a role which is at disposal of everyone who decides to stop and looks at them. And if were they simply objects of a social experiment?.